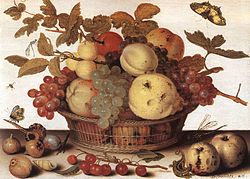 First Fruits are a religious offering of the first agricultural produce of the harvest. In classical Greek, Roman, Hebrew and Christian religions, the first fruits were given to priests to offer to God. First Fruits were often a primary source of income to maintain the religious leaders and the facility. Beginning in 1966 a unique "First Fruits" celebration brought the Ancient African harvest festivals that became the African American Holiday, Kwanzaa. This reminded them that God will provide for their every need.

In Classical Athens the First Fruits were called an offering of aparche. Except during times of war, this would be a major source of funds for the temples of the Eleusinian goddesses, Demeter and Kore. Much of the agricultural offering was sold by the temple with the proceeds being used to pay for the daily upkeep of the temple complex. Under Pericles' rule, it became a way of extending Athens' power. The Demos or voting citizens would control the operation of the temple by elected boards. During times of war or for other necessity the Demos would borrow money from the treasury of the temple. Neighboring cities under Athens' control were required to give offerings from their harvests. This served to enrich Athens and extend her power.

Much of this was shown in the temple reports which were carved in stone when the governing body (called the epistatai) of the temple changed hands. In the stone IG I3 386-387 it can been seen how the finances of the Eleusinian temples worked. Doctor Maureen B. Cavanaugh who translated stone IG I3 386-387, argues that there were heavy implications of the funding realized from the First Fruits donations to the temple, in particular that it brought significant impact on Athenian power.[1] This is noted in a loan cited in the stone record, of over 20,000 silver drachmas to the city. The Eleusinian temple complex was more than just a temple to Demeter; there were living quarters, storage, workshops, administration as well as public spaces. It was a major institution, functioning almost like a city within a city.

In Ancient Israel, First Fruits were a type of terumah that was akin to, but distinct from, terumah gedolah. While terumah gedolah was an agricultural tithe, Bikkurim (discussed in the Bikkurim tractate of the Talmud) were a sacrificial gift brought up to the altar. (Bikkurim 3:12). The major obligation to bring First Fruits (Heb. Bikkurim) to the Temple began at the festival of Shavuot and continued until the festival of Sukkot. (Bikkurim 1:6). This tithe was limited to the traditional seven agricultural products (wheat, barley, grapes in the form of wine, figs, pomegranates, olives in the form of oil, and dates) grown in Israel.[2] This tithe, and the associated festival of Shavuot, is legislated by the Torah.[3] Textual critics speculate that these regulations were imposed long after the offerings and festival had developed.[4]

By the time of classical antiquity, extensive regulations regarding Bikkurim were recorded in the classical rabbinical literature.[5] According to Jewish law, the corners of fields, wild areas, left-overs after harvesting (gleanings), and unowned crops were not subjected to (and could not be used as) the tithe of First Fruits (they were intended to be left as charity for the poor, and other mendicants);[2] plants from outside Israel were also prohibited from inclusion in the tithe,[2] as was anything belonging to non-Jews.[6] The rules also specify that that each type of product had to be individually tithed, even if the numbers were balanced so that there was no difference in amount between this situation and using just some types of First Fruit as the tithe, and retaining others in their entirety.[2] Fruit which was allocated to the tithe could not be swapped for fruit which wasn't, to the extent that wine couldn't be swapped for vinegar, and olive oil couldn't be replaced by olives; furthermore, Fruits were not allowed to be individually divided if only part went to the tithe (small whole onions had to be used rather than fractions of large onions, for example).[2]

The pilgrims that brought up the Bikkurim to the Temple were obligated to recite a declaration set forth in Deuteronomy 26:3-10. (Bikkurim 3:6). This declaration was incorporated into a beautiful and grand festive celebration with a procession of pilgrims marching up to Jerusalem and then the Temple with gold, silver or willow baskets to which live birds were tied. (Bikkurim 3:3,5 and 8). The pilgrims were led by flutists to the city of Jerusalem where they were greeted by dignitaries. (Bikkurim 3:3). The procession would then resume with the flutist in lead until the Temple Mount where the Leviim would break out in song. (Bikkurim 3:4). The birds were given as sacrificial offerings and the declaration would be made before a priest while the basket was still on the pilgrim's shoulder. (Bikkurim 3:5-6). After the basket was presented to the priest, it was placed by the Altar and the pilgrim would bow and leave. (Bikkurim 3:6).

Although some Christian churches do celebrate harvest time, the idea of giving the First Fruits to the church has been for the large part not actively observed in Western Christianity. In Eastern Orthodox Christianity, the 'first fruits' tradition is kept during the Great Feast for the Transfiguration of Our Lord, held on August 6/19.

In the Canonical Gospels, the concept of the harvest of First Fruits is used metaphorically and allegorically. In the Gospel of Matthew, Jesus is described as stating that “in the time of harvest” he would instruct the harvesters (i.e., the angels) to gather the “tares”, bind them into bundles, and burn them, but to "gather the wheat into [his] barn" (Matthew 13:30). Some argue that this teaching is about the Last Judgment rather than offering any thanksgiving to a deity, the “tares” being sinners or unbelievers of God and his son Jesus and the “wheat” being believers of God, although it also fits the rapture as noted in (Matthew 24:31) and (Revelation 14:4).

Other Christians, as well as early Gnostic writers argued it was less about sin and more about following Jesus' teachings and abandoning the teachings they had formerly known. In the Gospel of John, Jesus is described as stating “...he that reapeth receiveth wages, and gathereth fruit unto life eternal: that both he that soweth and he that reapeth may rejoice together” (John 4:36), which some Christians argue is about rewards from God for those who perform God’s work. Tithe literally means a tenth. First Fruits means to appropriately mark a portion of the produce of the field as belonging to God. In the Law of Moses there is a parallel between the offering of first fruits and the offering of the first-born male which opens the womb. The latter belongs to the Lord, and must be either sacrificed to him, or redeemed.

The Apostle Paul also referred to Jesus' resurrection as a type of "First Fruit" (1Corinthians 15:20) where he says: "But now Christ has been raised from the dead, the first fruits of those who are asleep."

In the Eastern Orthodox Church

The Eastern Orthodox Church the offering of first fruits takes the form of a thanksgiving and blessing. The produce is then consumed by the faithful rather than being given to the Church (though it may be donated as a free-will offering). The liturgical concept behind the blessing is the faithful offering back to God a token of that which he in his lovingkindness has provided, God blessing these firstfruits and returning them to the faithful for their benefit and blessing.

The blessing of first fruits traditionally begins on the Great Feast of the Transfiguration (August 6), with the blessing of grapes. In localities where grapes are not grown, other early-ripening fruits such as apples may be offered. There is a special ceremony at the end of the Divine Liturgy at which the priest blesses the first fruits, asking "...that the Lord may bless them, that they may be to us unto rejoicing, and that He may accept a gift of these fruits unto the cleansing of our sins..."[7]

As the harvest season progresses, the first fruits of each species can be brought to the church to be blessed, using a similar format, but a different prayer: "...that the Lord may receive our gift unto His eternal treasury and grant us an abundance of earthly goods..."[7]

In the Roman Catholic Church

In the Middle Ages the concept of offering the first fruits was adapted by the Christian church. This was called a tithe and was basically a tax to support the local clergy and the facility. In England, every tenth egg, sheaf of wheat, lamb, chicken, and all other animals were given to the church as a tithe, so farm products were expected to be donated throughout the year.

In France, the tithes—called la dîme—were a land and agricultural tax. The offering of first fruits was also referred to as new fruits. In French churches in the Middle Ages, new fruits were at given seasons presented at Mass for blessing. The blessed fruits were kept by the church and divided between the clergy and the poor. Similar customs during the Middle Ages could be found in all European countries.

First Fruits also refers to the payment new clerics made to the bishop or the Pope of all profits from the territory the new cleric controlled. This payment was called both Annates and First Fruits.

In The Book of Mormon, a canon of scripture used by The Church of Jesus Christ of Latter-day Saints, a similar passage is found stating "the Holy Messiah, who layeth down his life according to the flesh, and taketh it again by the power of the Spirit, that he may bring to pass the resurrection of the dead, being the first that should rise. Wherefore, he is the firstfruits unto God".[8]