First inauguration of Lyndon B. Johnson

At the time, Johnson was the Vice President to President John F. Kennedy.

At 12:30 pm Central Standard Time on November 22, Kennedy was assassinated in Dallas, Texas while riding with his wife, Jacqueline, in the presidential motorcade. Johnson was riding in a car behind the president with his wife, Lady Bird Johnson, and Texas Senator Ralph Yarborough. Immediately after shots were fired, Johnson was thrown down and sat on by Secret Service agent Rufus Youngblood,[1] and the President's and Vice President's cars sped to Parkland Memorial Hospital.[2]

There were initial reports that Johnson might have also been shot, slightly wounded in the arm or that he had suffered another heart attack (he had suffered one eight years earlier that nearly killed him). Mrs. Johnson confirmed to reporters that he was fine and did not suffer any injury or illness other than being shaken at what he'd seen.

In the hospital, Johnson was surrounded by Secret Service agents, who encouraged him to return to Washington in case he too was targeted for assassination. Johnson wished to wait until he knew of Kennedy's condition; at 1:20 pm he was told Kennedy was dead and left the hospital almost twenty minutes later.[2] 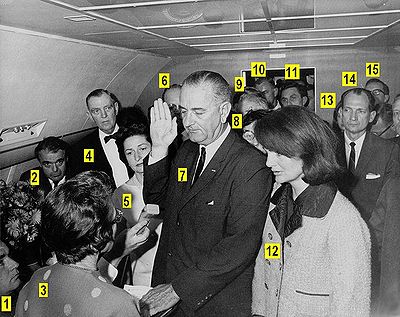 At this point arrangements were made to provide Secret Service protection of the two Johnson daughters (Lynda Bird Johnson Robb and Luci Baines Johnson), and it was decided that the new president would leave on the presidential aircraft because it had better communications equipment. Johnson was driven by an unmarked police car to Love Field, and kept below the car's window level throughout the journey.[2]

The President waited for Jacqueline Kennedy, who in turn would not leave Dallas without her husband's body, to arrive aboard Air Force One. Kennedy's casket was finally brought to the aircraft, but takeoff was delayed until Johnson took the oath of office.[2]

There was concern that since the Secret Service had taken the body of Kennedy from Parkland Hospital against the wishes of the Dallas medical examiner, Earl Rose, who had insisted an autopsy was required, the Dallas Police Department would seek to prevent Air Force One taking off.[3] Assassination of the President was not yet a federal crime.

President Johnson chose local Judge Sarah T. Hughes, a long standing friend, to swear him in. He had previously sought her appointment to a federal judgeship, which Robert Kennedy initially rejected on advice from the Justice Department on account of her age (then 65 years old). When the Justice Department reversed its decision a few weeks later and appointed Hughes, Johnson was outraged at having not been consulted.[3]

Inauguration aboard Air Force One

For the inauguration twenty-seven people squeezed into the sixteen-foot square stateroom of Air Force One for the proceedings. Adding to the discomfort was the lack of air conditioning as the aircraft had been disconnected from the external power supply, in order to take off promptly.[1][3] As the inauguration proceeded the four jet engines of Air Force One were being powered up.

The swearing-in ceremony administered by Judge Hughes in an Air Force One conference room represented the first time that a woman administered the presidential oath of office as well as the only time it was conducted on an airplane.[4] Instead of the usual Bible, Johnson was sworn in upon a missal found on a side table in Kennedy's Air Force One bedroom.[5] After the oath had been taken, Johnson kissed his wife on the forehead. Mrs. Johnson then took Jackie Kennedy's hand and told her, "The whole nation mourns your husband."[1] 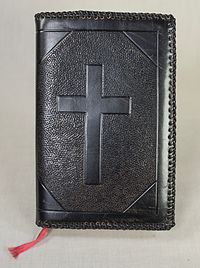 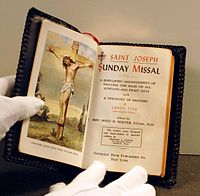 Missal used in the inauguration

At almost exactly the same time as the ceremony, CBS anchor Walter Cronkite read aloud on the air wire copy from the Associated Press officially confirming Kennedy's death, subsequently adding that Johnson would be sworn in as president. According to the Museum of Broadcast Communications's Encyclopedia of Television, during their frantic afternoon coverage of the unfolding events, American broadcasters made a "determined effort" to refer to him as "President Johnson".[6]

The famous photograph of the inauguration was taken by Cecil Stoughton, John F. Kennedy's official photographer. On Stoughton's suggestion Johnson was flanked by his wife and Jacqueline Kennedy, facing slightly away from the camera so that blood stains on her pink Chanel suit would not be visible. The photograph was taken using a Hasselblad camera.[7] The inauguration was sound recorded by White House press secretary Malcolm Kilduff using Air Force One's dictaphone.

During the flight back to Andrews Air Force Base, Johnson made several phone calls on the radio telephone, including to Rose Kennedy (JFK's mother) and Nellie Connally (wife of John Connally).[1] In addition, he made the decision to request all cabinet members to stay in their posts and asked to meet both parties' leaders in Congress soon.[1]

Johnson also asked Jack Valenti, Bill Moyers, and Liz Carpenter to write a brief statement for him to read on the day's events, which he then edited slightly himself. At 6:10 pm, after landing at Andrews amid a crowd of Congressional leaders, he walked to an already prepared set of microphones and began his first public statement as president:[1][8]

This is a sad time for all people. We have suffered a loss that cannot be weighed. For me, it is a deep personal tragedy. I know that the world shares the sorrow that Mrs. Kennedy and her family bear. I will do my best. That is all I can do. I ask for your help--and God's. audio

Afterwards Johnson was said to have regretted delivering the remarks, believing he sounded harsh and strident.[9]