The first inauguration of Ronald Reagan as the 40th President of the United States was held on January 20, 1981. The inauguration marked the commencement of the first four-year term of Ronald Reagan as President and George H. W. Bush as Vice President. Chief Justice Warren E. Burger administered the oath of office. Minutes later, the Americans held hostage in Iran were released.[1]

The inauguration was the first to be held on the West Front of the United States Capitol Building. The decision to move the ceremonies from the East Front was made in June 1980 by the Joint Committee on Inaugural Ceremonies.[2] This was done partly to save money, since the West Front's steps could be used as a base for the ceremonial platform, obviating the need to construct one. Another factor was the ability of the facing National Mall to accommodate more spectators,[2] still another is that it would allow Reagan to face towards California, his adopted home state.

Address and release of hostages 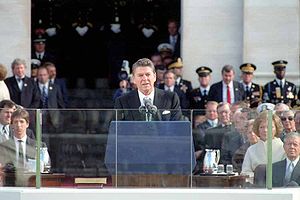 Reagan's inaugural address was 2,452 words long. It utilized the vista offered by the West Front, invoking the symbolism of the Presidential memorials and Arlington National Cemetery in the distance.[2] As Reagan was giving his address, 52 Americans held hostage in Iran for the previous 444 days were released.[3]

The Reverend Donn Moomaw, pastor of the Bel Air Presbyterian Church in Los Angeles, where Reagan and his wife, Nancy, worshipped, gave the invocation and benediction at the ceremony, and said: "We thank you, oh God, for the release of our hostages."[3] But his prayer came before the hostages left Tehran.[3]

President Reagan was about to have lunch with Congressional leaders in Statuary Hall in the Capitol after the inauguration ceremony when he was informed that the plane carrying the hostages had left Iranian airspace.[3] During the luncheon, he broke the news saying: "With thanks to Almighty God, I have been given a tag line, the get-off line, that everyone wants for the end of a toast or a speech, or anything else. Some 30 minutes ago, the planes bearing our prisoners left Iranian air space, and they're now free of Iran."[3] 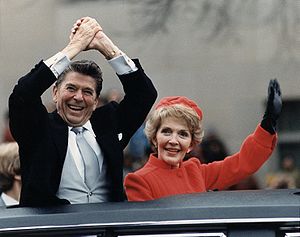 The Reagans in the inaugural parade

Throughout Washington and throughout the country, there were celebrations to mark the inauguration and the release of the hostages.[4][5] For the only time, the national Christmas tree on the ellipse near the White House was lighted on an Inauguration Day, and it was done to mark the release of the hostages.[4] There were signs saying "444 DAYS!" as part of the celebrations.[4] People wrapped the country in yellow ribbons, plastered freedom messages on billboards, and started preparations for welcoming the freed hostages home. The yellow-ribbon became a symbol of the solidarity of Americans with the hostages.[5] The Statue of Liberty in New York harbor was bathed in light, the Empire State building lit in red, white, and blue, and the Boston Fire Department sounded gongs to hail deliverance of the hostages.[5]