From Infogalactic: the planetary knowledge core
(Redirected from First past the post)
Jump to: navigation, search 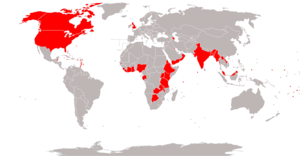 Countries where a first-past-the-post system of voting is used.

A first-past-the-post (abbreviated FPTP, 1stP, 1PTP or FPP), or winner-takes-all, election is one that is won by the candidate receiving more votes than any others. It is a common, but not universal, feature of electoral systems with single-member legislative districts. Large countries widely using FPTP include India, United States, United Kingdom and Canada.

The first-past-the-post voting method is one of the several plurality voting systems.

First-past-the-post voting methods can be used for single and multiple member elections. In a single member election the candidate with the highest number, not necessarily a majority, of votes is elected. The two-round ("runoff") voting system uses a first-past-the-post voting method in each of the two rounds. The first round determines which two candidates will progress to the second, final round ballot.

In a multiple member first-past-the-post ballot, the first number of candidates, in order of highest vote, corresponding to the number of positions to be filled are elected. If there are six vacancies then the first six candidates with the highest vote are elected. A multiple selection ballot where more than one candidate can be voted for is also a form of first-past-the-post voting in which voters are allowed to cast a vote for as many candidates as there are vacant positions; the candidate(s) with the highest number of votes is elected.

The Electoral Reform Society is a political pressure group based in the United Kingdom which advocates abolishing the first-past-the-post system (FPTP) for all national and local elections. It argues FPTP is "bad for voters, bad for government and bad for democracy". It is the oldest organisation concerned with electoral systems in the world.[2]

As of 2014[update], all U.S. States other than Maine and Nebraska use a winner-take-all form of simple plurality, first-past-the-post voting, to appoint the electors of the Electoral College. Under the typical system, the presidential candidate gaining the greatest number of votes wins all of the state's available electors, regardless of the number or share of votes won, or the difference separating the leading candidate and the first runner-up.[3]

Under a first-past-the-post voting system the highest polling candidate (or a group of candidates for some cases) is elected. In this real-life example, Tony Tan obtained a greater number than the other candidates, and so was declared the winner.

The effect of a system based on single seat constituencies is that the larger parties gain a disproportionately large share of seats, while smaller parties are left with a disproportionately small share of seats. It is more likely that a single party will hold a majority of legislative seats. In the United Kingdom, 18 out of 23 general elections since 1922 have produced a single party majority government. For example, the 2005 UK General election results in Great Britain are as follows:

It can be seen that Labour took a majority of seats, 57%, with only 36% of the vote. The largest two parties took 69% of votes and 88% of seats. Meanwhile, the smaller Liberal Democrat party took more than a fifth of votes but only about a tenth of the seats in parliament.

Another example would be the UK General Election held on 7 May 2015:

Here, the Conservatives took 51% of the seats with only 37% of the vote. More significantly, the Liberal Democrats and the SNP together had fewer votes than UKIP but both gained more seats; with fewer votes, they together managed to win 64 times the number of UKIP seats in parliament. It should be noted that the Liberal Democrats also suffered under first-past-the-post, by winning only 1% of the seats on 8% of the national popular vote.

To a greater extent than many other electoral methods, the first-past-the-post system encourages tactical voting. Voters have an incentive to vote for one of the two candidates they predict are most likely to win, even if they would prefer neither candidate to win. A vote for any other candidate is considered to be likely "wasted" and bear no impact or benefit on the final result they would prefer—and in many cases, harm it.

The position is sometimes summarized, in an extreme form, as "all votes for anyone other than the second place are votes for the winner". This is because by voting for other candidates, they have denied those potential votes to the second place candidate who could have won had they received them. Following the extremely close 2000 U.S. presidential election, some supporters of Democratic candidate Al Gore believe that one reason he lost the election to Republican George W. Bush is because a portion of the electorate (2.7%) voted for Ralph Nader of the Green Party, and exit polls indicated that more of these voters would have preferred Gore (45%) to Bush (27%), with the rest not voting in Nader's absence.[8] The argument for this case is even more pronounced because the election was ultimately decided on the basis of the election results in Florida where Bush prevailed over Gore by a margin of only 537 votes (0.009%), which was far exceeded by the number of votes, 97488 (0.293%), that Nader received.

In Puerto Rico, there are three principal voter groups: the Independentistas (pro-independence), the Populares (pro-commonwealth), and the Estadistas (pro-statehood). Historically, there has been a tendency for Independentista voters to elect Popular candidates and policies. This phenomenon is responsible for some Popular victories, even though the Estadistas have the most voters on the island. It is so widely recognised that the Puerto Ricans sometimes call the Independentistas who vote for the Populares "melons", because the fruit is green on the outside but red on the inside (in reference to the party colors).

Because voters have to predict in advance who the top two candidates will be, results can be significantly distorted:

Proponents of other single-winner voting systems argue that their proposals would reduce the need for tactical voting and reduce the spoiler effect. Examples include the commonly used two-round system of runoffs and instant runoff voting, along with less tested systems such as approval voting and Condorcet methods. 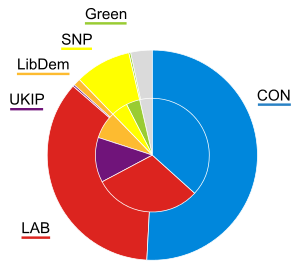 A graph showing the difference between the popular vote (inner circle) and the number of seats won by major political parties (outer circle) at the United Kingdom general election, 2015

Duverger's law is an idea in political science which says that constituencies that use first-past-the-post systems will become two-party systems, given enough time. Economist Jeffrey Sachs explains:

The main reason for America's majoritarian character is the electoral system for Congress. Members of Congress are elected in single-member districts according to the "first-past-the-post" (FPTP) principle, meaning that the candidate with the plurality of votes is the winner of the congressional seat. The losing party or parties win no representation at all. The first-past-the-post election tends to produce a small number of major parties, perhaps just two, a principle known in political science as Duverger's Law. Smaller parties are trampled in first-past-the-post elections.

Duverger's Law is rarely seen in reality, with most first-past-the-post elections resulting in multiparty legislatures, the United States being the major exception.[10]

Wasted votes are votes cast for losing candidates or votes cast for winning candidates in excess of the number required for victory. For example, in the UK general election of 2005, 52% of votes were cast for losing candidates and 18% were excess votes – a total of 70% wasted votes. This is perhaps the most fundamental criticism of FPTP, that a large majority of votes may play no part in determining the outcome. This "winner-takes-all" system may be one of the reasons why "voter participation tends to be lower in countries with FPTP than elsewhere."[11]

Dots represent voters; lines represent electoral districts. The diagram to the left represents a fair (ungerrymandered) election. The other diagram shows how gerrymandering can tilt the odds to favor one side.

Because FPTP permits many wasted votes, an election under FPTP is easily gerrymandered. Through gerrymandering, constituencies are deliberately designed to unfairly increase the number of seats won by one party at the expense of another.

The presence of spoilers often gives rise to suspicions that manipulation of the slate has taken place. The spoiler may have received incentives to run. A spoiler may also drop out at the last moment, inducing charges that such an act was intended from the beginning.

Smaller parties can disproportionately change the outcome of an FPTP election by swinging what is called the 50-50% balance of two party systems, by creating a faction within one or both ends of the political spectrum which shifts the winner of the election from an absolute majority outcome to a simple majority outcome favouring the previously less-favoured party. In comparison, for electoral systems using proportional representation small groups win only their proportional share of representation. However, in PR systems, small parties can become decisive in Parliament, thus gaining a power of blackmail against the Government—a problem which is generally reduced by the FPTP system.[12][13]

Scholars rate voting systems using mathematically derived voting system criteria, which describe desirable features of a system. No ranked preference method can meet all of the criteria, because some of them are mutually exclusive, as shown by results such as Arrow's impossibility theorem and the Gibbard-Satterthwaite theorem.[14]

Y The majority criterion states that "if one candidate is preferred by a majority (more than 50%) of voters, then that candidate must win".[15] First-past-the-post meets this criterion (though not the converse: a candidate does not need 50% of the votes in order to win). Although the criterion is met for each constituency vote, it is not met when adding up the total votes for a winning party in a parliament.

N[16] The Condorcet winner criterion states that "if a candidate would win a head-to-head competition against every other candidate, then that candidate must win the overall election". First-past-the-post does not[16] meet this criterion.

N[16] The Condorcet loser criterion states that "if a candidate would lose a head-to-head competition against every other candidate, then that candidate must not win the overall election". First-past-the-post does not[16] meet this criterion.

N The independence of irrelevant alternatives criterion states that "the election outcome remains the same even if a candidate who cannot win decides to run." First-past-the-post does not meet this criterion.

N The independence of clones criterion states that "the election outcome remains the same even if an identical candidate who is equally-preferred decides to run." First-past-the-post does not meet this criterion.

The following is a list of the countries currently following the first-past-the-post voting system.[17] [18]