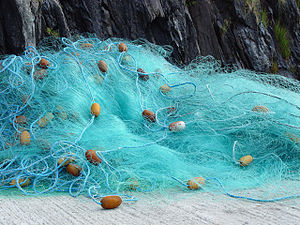 A fishing net or fishnet is a net used for fishing. Nets are devices made from fibers woven in a grid-like structure. Fishing nets are usually meshes formed by knotting a relatively thin thread. Early nets were woven from grasses, flaxes and other fibrous plant material. Later cotton was used. Modern nets are usually made of artificial polyamides like nylon, although nets of organic polyamides such as wool or silk thread were common until recently and are still used. 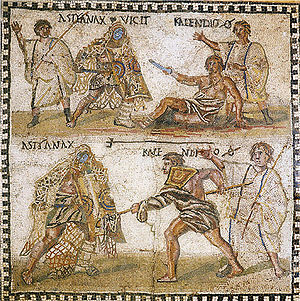 Mosaic, 4th century BC, showing a retiarius or "net fighter", with a trident and cast net, fighting a secutor 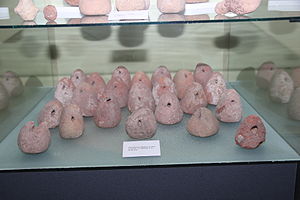 Fishing nets have been used widely in the past, including by stone age societies. The oldest known fishing net is the net of Antrea, found with other fishing equipment in the Karelian town of Antrea. The net was made from willow, and dates back to 8300 BC.[1] The remnants of another fishing net dates back to the late Mesolithic, and were found together with sinkers at the bottom of a former sea.[2][3] Some of the oldest rock carvings at Alta (4200–500 BC) have mysterious images, including intricate patterns of horizontal and vertical lines sometimes explained as fishing nets. American Native Indians on the Columbia River wove seine nets from spruce root fibers or wild grass, again using stones as weights. For floats they used sticks made of cedar which moved in a way which frightened the fish and helped keep them together.[4] With the help of large canoes, pre-European Maori deployed seine nets which could be over one thousand metres long. The nets were woven from green flax, with stone weights and light wood or gourd floats, and could require hundreds of men to haul.[5]

Fishing nets are well documented in antiquity. They appear in Egyptian tomb paintings from 3000 BC. In ancient Greek literature, Ovid makes many references to fishing nets, including the use of cork floats and lead weights.[6][7][8] Pictorial evidence of Roman fishing comes from mosaics which show nets.[9] In a parody of fishing, a type of gladiator called retiarius was armed with a trident and a cast net. He would fight against a secutor or the murmillo, who carried a short sword and a helmet with the image of a fish on the front.[10] Between 177 and 180 the Greek author Oppian wrote the Halieutica, a didactic poem about fishing. He described various means of fishing including the use of nets cast from boats, scoop nets held open by a hoop, and various traps "which work while their masters sleep". Here is Oppian's description of fishing with a "motionless" net:

The fishers set up very light nets of buoyant flax and wheel in a circle round about while they violently strike the surface of the sea with their oars and make a din with sweeping blow of poles. At the flashing of the swift oars and the noise the fish bound in terror and rush into the bosom of the net which stands at rest, thinking it to be a shelter: foolish fishes which, frightened by a noise, enter the gates of doom. Then the fishers on either side hasten with the ropes to draw the net ashore.

In Norse mythology the sea giantess Rán uses a fishing net to trap lost sailors. References to fishing nets can also be found in the New Testament.[11] Jesus Christ was reputedly a master in the use of fishing nets. The tough, fibrous inner bark of the pawpaw was used by Native Americans and settlers in the Midwest for making ropes and fishing nets.[12][13] The archaeological site at León Viejo (1524–1610) has fishing net artifacts including fragments of pottery used as weights for fishing nets.

Fishing nets have not evolved greatly, and many contemporary fishing nets would be recognized for what they are in Neolithic times. However, the fishing lines from which the nets are constructed have hugely evolved. Fossilised fragments of "probably two-ply laid rope of about 7 mm diameter" have been found in one of the caves at Lascaux, dated about 15,000 BC.[14] Egyptian rope dates back to 4000 to 3500 BC and was generally made of water reed fibers. Other rope in antiquity was made from the fibers of date palms, flax, grass, papyrus, leather, or animal hair. Rope made of hemp fibres was in use in China from about 2800 BC. 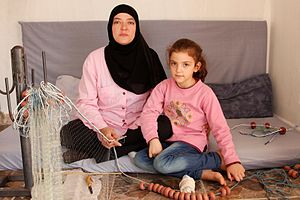 A woman adds weights to a fishing net, which she hopes to sell to support her family.[15]

Some fishing nets are knitted by hand. Other parts can be made by machine.

Ropes and lines are made of fibre lengths, twisted or braided together to provide tensile strength. They are used for pulling, but not for pushing. The availability of reliable and durable ropes and lines has had many consequences for the development and utility of fishing nets, and influences particularly the scale at which the nets can be deployed. 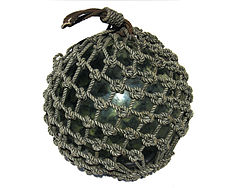 Some types of fishing nets, like seine and trammel, need to be kept hanging vertically in the water by means of floats at the top. Various light "corkwood"-type woods have been used around the world as fishing floats. Floats come in different sizes and shapes. These days they are often brightly coloured so they are easy to see.

The Cucuteni-Trypillian culture, ce. 5500 BC to 2750 BC, created ceramic weights in various shapes and sizes which were used as loom weights when weaving, and also were attached to fishing nets.[34]

Despite their ornamental value, dog conches are traditionally used by local fishermen as sinkers for their fishing nets.[35][36]

Fisheries often use large-scale nets that are indiscriminate and catch whatever comes along; sea turtle, dolphin, or shark. Bycatch is a large contributor to sea turtle deaths.[37] Longline, trawl,[38] and gillnet fishing are three types of fishing with the most sea turtle accidents. Deaths occur often because of drowning, where the sea turtle was ensnared and could not come up for air.[39]

Fishing nets, usually made of plastic, can be left or lost in the ocean by fishermen. Known as ghost nets, these entangle fish, dolphins, sea turtles, sharks, dugongs, crocodiles, seabirds, crabs, and other creatures, restricting movement, causing starvation, laceration and infection, and, in those that need to return to the surface to breathe, suffocation.[40]

Divers may become trapped in fishing nets; monofilament is almost invisible underwater. Divers often carry a net cutter. This is a small handheld tool carried by scuba divers to extricate themselves if trapped by a fishing net or fishing line. It has a small sharp blade such as a replaceable scalpel blade inside the small notch. There is a small hole at the other end to for a lanyard to tether the cutter to the diver.