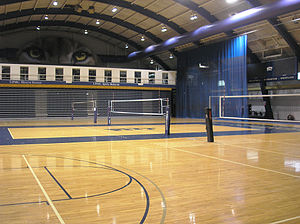 Fitzgerald Field House is the competitive venue for the Pitt varsity sports of volleyball, gymnastics, and wrestling. With an indoor track, the Field House also serves as the primary indoor facility for the university's track and field team, as well as housing the wrestling training facility and the primary training and weight facilities for Pitt's Olympic sports. In addition, it contains the offices and locker rooms for baseball, cross country, soccer, softball, swimming and diving, and tennis. The facility also has squash courts. The Field House is connected by an underground tunnel to Trees Pool and the Gymnastics Training Center, both located in Trees Hall.

In 1999, Fitzgerald Field House underwent a $3.8 million ($5.4 million today) in renovations of existing facilities and a major addition to the west side of the building for locker rooms, team dressing rooms, and training and equipment rooms.[5] In the summer of 2005, the wrestling training facility built in 1951 was reconstructed to be twice the size of the previous training facility and also received new floor and wall mats, a new ventilation system, new lighting, a video and recruitment room, and a balcony suspended above the mats featuring cardio equipment.[6] In addition, an Olympic sports weight room was added to serve as a primary training facility for over 300 Pitt student-athletes and includes Hammer Strength and Nautilus Next Generation machines, nearly 8,600 pounds of free weights, and a comprehensive cardiovascular unit, including treadmills, stationary bikes and the Stairmaster Gauntlet.[7] The renovations and addition of the weight room reduced the seating capacity from the original 6,798 seats to a capacity of 4,122.

Further renovations of the Field House in 2008 totaled $1.4 million ($1.5 million today) and included new volleyball courts and installation of seating and electronic equipment to meet NCAA requirements.[8][9] In November, 2011, the Nathan Hershey Athletic Training Facility was dedicated in the Field House.[10] 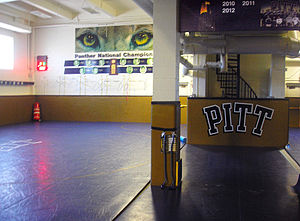