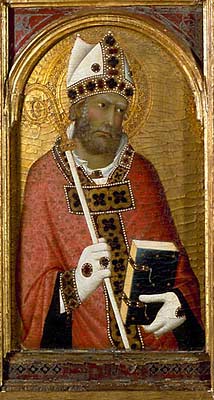 The Fitzwilliam Museum is the art and antiquities museum of the University of Cambridge, located on Trumpington Street opposite Fitzwilliam Street in central Cambridge, England. It receives around 470,000 visitors annually (2011–12).[1] Admission is free.

The Museum is the lead museum for the University of Cambridge Museums consortium, one of 16 Major Partner Museum services funded by Arts Council England to lead the development of the museums sector.[1] The current Director of the Fitzwilliam Museum is Tim Knox.

The museum was founded in 1816 with the legacy of the library and art collection of the 7th Viscount FitzWilliam. The bequest also included £100,000 "to cause to be erected a good substantial museum repository". The collection was initially placed in the old Perse School building in Free School Lane. It was moved in 1842 to the Old Schools (at that time the University Library). The "Founder's Building" itself was designed by George Basevi, completed by C. R. Cockerell and opened in 1848; the entrance hall is by Edward Middleton Barry and was completed in 1875. The first stone of the new building was laid by Gilbert Ainslie in 1837. A further large bequest was made to the University in 1912 by Charles Brinsley Marlay, including a sum of £80,000 and a collection of 84 pictures. A two-storey extension, paid for partly by the Courtauld family, was added in 1931.[2] 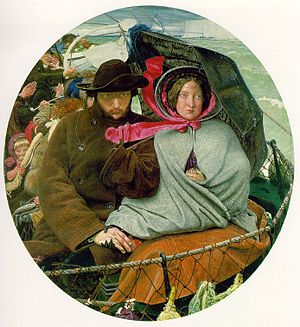 The Last of England, by Ford Madox Brown.

There is also the largest collection of 16th-century Elizabethan virginal manuscript music written by some of the most notable composers of the time. Composers such as William Byrd, Doctor John Bull, Orlando Gibbons and Thomas Tallis.

The Egyptian Galleries at the Fitzwilliam Museum reopened in 2006 after a two-year, £1.5 million programme of refurbishment, conservation and research.[citation needed]

The museum has a particularly extensive collection of Turner, which has its origins in a set of 25 watercolour drawings donated to the university by John Ruskin in 1861.[4] Sir Sydney Cockerell, who was serving as director of the museum at the time, went on to acquire a further 8 Turner watercolours and some of his writings.

Many items in the museum are on loan from colleges of the University, for example an important group of impressionist paintings owned by King's College, which includes Cézanne's The Abduction and a study for Sunday Afternoon on the Island of La Grande Jatte by Seurat.

The Museum's collection of Pre-Raphaelite paintings includes a version of Ford Madox Brown's The Last of England, voted 8th greatest painting in Britain in 2005's Radio 4 poll, the Greatest Painting in Britain Vote. 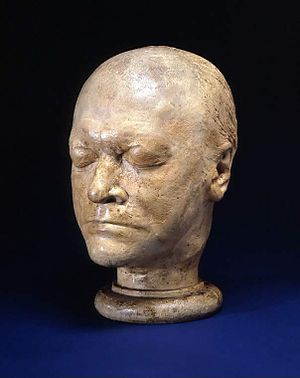 In 2015, the museum displayed two bronze statues (the Rothschild Bronzes) that it believed to be the work of Italian Renaissance artist Michaelangelo. If true, they would be the only known surviving bronze sculptures by the artist. The pair of statues depict naked, apparently drunk, men riding panthers. Art historian Paul Joannides connected the statues to a drawing in the Musée Fabre by an apprentice of Michelangelo depicting the same subject in the same pose.[5][6][7][8][9]

On 25 January 2006, a member of the public tripped which resulted in three huge oriental porcelain vases being shattered and requiring painstaking reconstruction.[10] At around 19:30 BST on 13 April 2012, 18 valuable and culturally significant Chinese works of art were stolen.[11] The burglars were sentenced to a combined 18 years in jail.[12]

The "Friends of the Fitzwilliam", founded in 1909, is a society supporting the museum, the oldest in Britain.[citation needed] One of the longest-serving members (1935–2003) was Denys Spittle, whose collection of manuscripts was exhibited in 2007 under the title "Private Pleasures: Illuminated manuscripts from Persia to Paris". 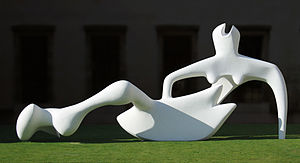 A Henry Moore sculpture outside the museum