The Flag Institute is an educational charity headquartered in London, UK. It claims to be the world's largest flag organisation. It maintains a UK Flag Registry and offers advice and guidance about flags and their usage. 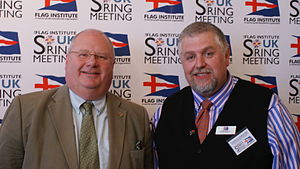 Eric Pickles, Secretary of State for Communities and Local Government, with Charles Ashburner, chief executive and trustee of the Flag Institute 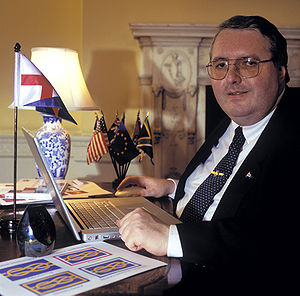 Graham Bartram. Chief Vexillologist and Trustee of the Flag Institute

The Institute was formed out of the Flag Section of The Heraldry Society on St George's Day, 23 April 1971, by William Crampton, later President of FIAV, with Captain E.M.C. Barraclough, CBE RN, as its chairman.[1][2] It is a membership-based vexillological organisation with over 500 members from all parts of the world, and provides advice and assistance to individuals and organisations including UK Government departments, the BBC, ITN, and many publishers, museums and libraries.[3]

The Institute maintains the William Crampton Library, based in Kingston upon Hull, England and named in honour of its co-founder. Comprising over 40,000 flag related volumes it is thought to be one of the largest vexillology-based libraries in the world. It publishes a quarterly 24-page full colour journal, Flagmaster, and a virtual magazine called eFlags. Since 2006 it has sponsored an annual public lecture on a flag-related topic, known as the 'Perrin Lecture'. It holds twice yearly meetings for its members in various locations around the United Kingdom. The Institute itself is governed by a Board of five elected Trustees who are advised by an appointed Council of members.

The Flag Institute was congratulated by the Secretary of State for Communities and Local Government, Eric Pickles, on its first 40 years of service to the United Kingdom. In May 2011 he said:[4]

"Let me start by congratulating the Flag Institute on its first 40 years. 40 years as a respected source of help and advice. Not only to the UK Government, but to the United Nations and other organisations around the world. 40 years of bringing together enthusiasts, educating the public, and spreading knowledge.....The UK is very lucky in having – in the Institute – a group of dedicated and informed people who do a great deal to make sure that that respect is given. In your first 40 years you have established your credentials not just in this country, but on the world stage."

Following a postal ballot of members, the Institute became a charity at its annual general meeting in Worcester on Saturday 17 November 2012.

The Flag Institute's constitution[5] states that its objectives are;

Under the supervision of their Chief Vexillologist Graham Bartram, the Institute keeps a registry of flags for the countries, regions and counties of the UK.[6] Flag designs with which its officers have been involved include those for the badge and ensign of the UK Border Agency[7] and the flag of the UK Supreme Court.[8]

All Scottish flags must, by law, be authorised by Lord Lyon and recorded in the Public Register of All Arms and Bearings in Scotland. The Earl Marshal and the College of Arms are legally responsible for the flying of flags on land in the rest of the UK. The College of Arms and the Court of the Lord Lyon maintain official registers of flags.

With the impending Scottish independence vote in mind, in 2013 the Flag Institute members were asked for suggested designs of a post-independence UK flag. Five designs were showcased in the media to stimulate discussion, several of them incorporating elements of the Welsh flag of St David.[9]

File:West-Ashburner-Rosindell-NationsFlag.JPG
Admiral Lord West, Charles Ashburner, and Andrew Rosindell MP celebrate the permanent flying of the Nation's flag over the Houses of Parliament

Until early 2010 the national flag of the United Kingdom was only flown from the Houses of Parliament when parliament was actually sitting, and when the House rose it was taken down and the flagpole left bare.[10] The Flag Institute with the Flags and Heraldry Committee campaigned to see the flag flown permanently, to signify the enduring sovereignty of Parliament and to act as the foremost flag of the nation, day and night every day of the year. In early 2010 Black Rod agreed that this should be so and since then the flag has flown all the time.

This change was marked by a lunchtime reception on Tuesday 22 March 2011 in the River Room, House of Lords, hosted by Alan West, Baron West of Spithead and Andrew Rosindell MP.[11] 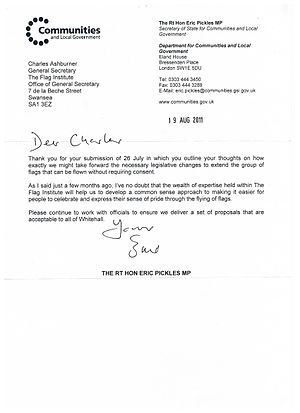 On 14 May 2011 at the Flag Institute Spring Meeting the Secretary of State for Communities and Local Government, Eric Pickles announced his intention to liberalise flag flying regulations in the UK.[12] The resulting discussion paper titled Liberalising the regime for flying flags[13] was published by DCLG in January 2012. New regulations were laid before Parliament on 17 September 2012 and came into force on 12 October 2012.[14]

“This really is a new Freedom to Fly Flags. In our super fast world of instant news and ever changing technology, flags remain the ultimate symbol of identity. The deregulation of flag flying regulations is something which everyone who believes in freedom of expression should support. [This is] an important step towards encouraging and protecting the huge variety of different community and individual identities of which British society should be so proud."[15]

File:Geoffparsons-flaginstitute-springmeeting2011.JPG
Geoff Parsons. Chairman and Trustee of the Flag Institute

The Flag Institute is governed by five elected Trustees, currently; 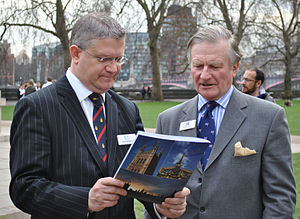 Malcolm Farrow, President of the Flag Institute (right) with Andrew Rosindell MP, Chair of the Flags and Heraldry Committee Left)

Members of the Flag Institute's Council are appointed by the Board of Trustees to advise them. Current appointees are: