The flag and coat of arms of the Sovereign Military Order of Malta are red flags bearing white crosses. Both date to the Middle Ages. The state flag represents the Sovereign Military Order of Malta (SMOM) as a sovereign institution. It bears a Latin cross that extends to the edges of the flag. The flag of the Order's Works represents its humanitarian and medical activities. It bears an eight-pointed Maltese cross.

Both flags together represent the SMOM. Its constitution states, "The flag of the Order bears either the white latin cross on a red field or the white eight - pointed cross (cross of Malta) on a red field." [2] 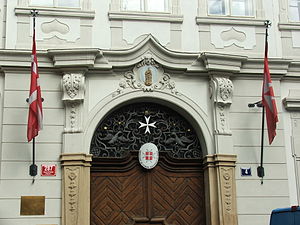 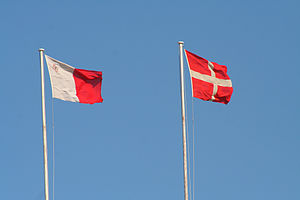 Flags of Malta and the SMOM at Fort St. Angelo.

The design of the State Flag, red with a white Latin cross, comes from the design worn by the Knights Hospitaller during the Crusades. A papal bull of Alexander IV in 1259 made this the design to be put on the mantling of the knights. After that, the emblem was adopted as a general symbol for the Order. In the time after the Hospitallers moved to Cyprus in 1291 it was flown from ships in their navy.[1] Today it flies from the SMOM's headquarters at Palazzo Malta in Rome and from other official residences and embassies. Together with the flag of Malta, it is also flown from Fort St Angelo in Birgu, Malta.[3] It goes with the Grand Master and members of the Sovereign Council when they make official visits.[1]

The Flag of the Order's Works features a Maltese cross, which became the definitive symbol of the Hospitallers under Grand Master Foulques de Villaret, who led the knights in their conquest of Rhodes. This flag is flown by the SMOM's Grand Priories, Subpriories, and National Associations. As a symbol of its humanitarian works, the Order flies it at its hospitals and medical facilities.[1] It is sometimes described as the "Grand Master's flag," but it is not used as a personal standard.[4]

The Grand Master's personal flag is red with a white Maltese cross surrounded by the collar of the order and surmounted by a crown. It flies over the SMOM's magistral seats when the Grand Master is present.[1] 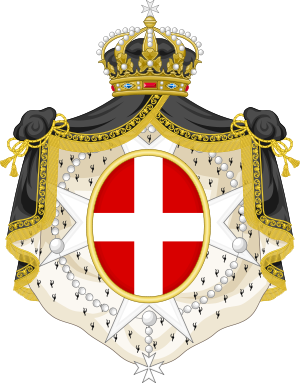 Coat of arms of the order.

The coat of arms contains the symbolism of the flag within.