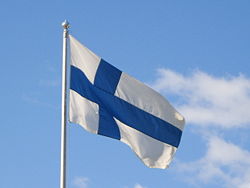 Various days are referred to as Flag days in Finland.

By law, the Finnish flag must be flown from public buildings on the following days:[1]

Days on which flying the Finnish flag is an established custom

It has become customary to fly the Finnish flag on the following occasions. The dates are also listed in the Finnish State Calendar compiled by the University of Helsinki, and it is recommended that the flag is flown on these occasions in the same way as on those prescribed by law.[2]

The flag is flown from 8 AM to sunset; however, even in summer at most to 9 PM. There are three exceptions: