The municipal flag of Chicago consists of two blue horizontal stripes on a field of white, each stripe one-sixth the height of the full flag, and placed slightly less than one-sixth of the way from the top and bottom. Between the two blue stripes are four red, six-pointed stars arranged in a horizontal row. The three sections of the white field and the two stripes represent geographical features of the city, the stars symbolize historical events, and the points of the stars represent important virtues or concepts.

In a review by the North American Vexillological Association of 150 American city flags, the Chicago city flag was ranked second best with a rating of 9.03 out of 10, behind only the flag of Washington, D.C.[1]

The three white background areas of the flag represent, from top to bottom, the North, West and South sides of the city. The top blue stripe represents Lake Michigan and the North Branch of the Chicago River. The bottom blue stripe represents the South Branch of the river and the "Great Canal", over the Chicago Portage.[2] The lighter blue on the flag is variously called sky blue[3] or pale blue;[4] in a 1917 article of a speech by Rice, it was called "the color of water".[5]

There are four red six-pointed stars on the center white stripe. From left to right:

A possible fifth star has been proposed for the city flag on more than one occasion. The first occasion occurred in the 1940s, when a letter to the Chicago Tribune asked that a fifth star be added to the city flag in honor of the city's place in the history of the nuclear age.[6] On another occasion, a star was proposed in honor of Harold Washington, the first African-American mayor of Chicago.[7] A fifth star was also discussed following the Chicago Flood of 1992. A proposal was put forward by the 2016 Olympic Games Bid Committee; if the bid to host the games had been successful, a fifth star might have been added to the flag;[8] however, the Olympic bid was lost to Rio de Janeiro. In a more facetious vein, a fifth star has been proposed if the Chicago Cubs should win the World Series, which has not happened since 1908.

Six-pointed stars are used because five-pointed stars represent sovereign states, and because the star as designed was not found on any other known flags as of 1917.[9] 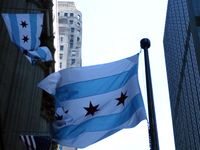 In 1915, Mayor William Hale Thompson appointed a municipal flag commission, chaired by Alderman James A. Kearnes. Among the commission members were wealthy industrialist Charles Deering and impressionist painter Lawton S. Parker. Parker asked lecturer and poet Wallace Rice to develop the rules for an open public competition for the best flag design. Over a thousand entries were received. In the end, the commission chose the design by Wallace Rice himself. On April 4, 1917, the commission's recommendation was accepted by the city council.