Flag and coat of arms of Normandy

From Infogalactic: the planetary knowledge core
(Redirected from Flag of Normandy)
Jump to: navigation, search 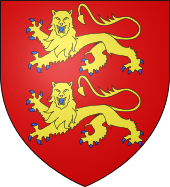 Coat of arms of Normandy

The flag and coat of arms of Normandy are symbols of Normandy, a geographical region in the north of France.

The traditional provincial flag, gules, two lion passant or, is used in both modern departments of France: Lower Normandy and Upper Normandy. It is based on the design of arms attributed to William the Conqueror, who launched the Norman conquest of England in 1066.

The red flag with two lion is nicknamed les p'tits cats "the little cats" in Norman. The three-lion version (known in the Norman language as les treis cats, "the three cats") may also be seen, which is based on the coat of arms of Richard I of England, last Duke of Normandy. The arms De gueules aux deux léopards d'or, armés et lampassés d'azur, passant l'un sur l'autre (Gules two lions passant gardant in pale or armed and langued azure) was described by Jacques Meurgey in 1941.[1]

In 1939 Jean Adigard des Gautries created the flag of Saint Olaf, a Nordic cross flag inspired by the Papal Cross borne on a standard by William the Conqueror. The Le Mouvement Normand adopted this flag in the 1970s, and it is used unofficially by some associations and individuals, especially those with an interest in the Viking origins of the Normans, although the Normans are also of Celtic (Belgae and Gauls) and Continental Germanic (Franks) origins. A flag combining the Saint-Olaf and the P'tit Cats, called the Croix de Falaise (Falaise cross) can sometimes be seen.

The three-leopard is used by some associations and individuals, especially those who support reunification of the regions. Jersey and Guernsey use three leopards in their national symbols.