Flags of the Ottoman Empire

From Infogalactic: the planetary knowledge core
(Redirected from Flag of Ottoman Empire)
Jump to: navigation, search 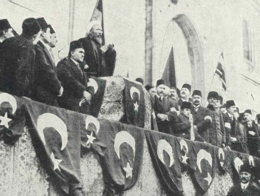 The Şeyhülislam declaring a Holy War against the Entente Powers in 1914,[1] with Ottoman Turkey flags placed in front of the podium. 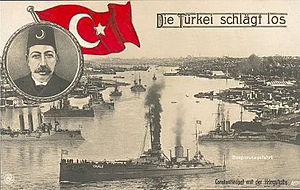 The Ottoman Navy on a postcard from WWI, with an image of Sultan Mehmed V.

The Ottoman Empire used a variety of flags, especially as naval ensigns, during its history.

Star and crescent came to be adopted as the official state symbol in the second half of the 18th century, and its use is recorded in various documents. A buyruldu from 1793 decrees that the ships of the Ottoman Navy must use a red flag featuring a white crescent and a star. In 1844, a version of this flag, with a 5-pointed star, was officially adopted as the Ottoman national flag. The decision to adopt a national flag was part of the Tanzimat reforms in the 19th century, which aimed to modernize the Ottoman state in line with the laws and norms of contemporary European states and institutions. The familiar star and crescent design later became a common element in the national flags of Ottoman successor states in the 20th century.

The current flag of Turkey is essentially equal to the late Ottoman flag, but has more specific legal standardizations (regarding its measures, geometric proportions, and exact tone of red) that were introduced with the Turkish Flag Law on May 29, 1936. 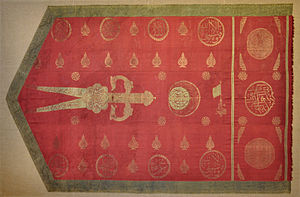 An early 19th-century example of a Zulfikar flag (comparable flags had been in use since at least the early 16th century).

Ottoman tugh captured in 1877 in the Romanian War of Independence.

The pre-modern Ottoman armies used the horse-tail standard or tugh rather than flags. Such standards remained in use alongside flags until the 19th century. A depiction of a tugh is found in the Relation d'un voyage du Levantby Joseph Pitton de Tournefort (1718).[2] War flags came into use by the 16th century. During the 16th and 17th centuries, Ottoman war flags often depicted the bifurcated Zulfikar sword, often misinterpreted in Western literature as showing a pair of scissors.[3] A Zulfikar flag claimed to have been used by Selim I (d. 1520) is on exhibit in the Topkapi Museum. Two Zulfikar flags are also depicted in a plate dedicated to Turkish flags in vol. 7 of Bernard Picart's Cérémonies et coutumes religieuses de tous les peuples du monde (1737), attributed to the Janissaries and the Ottoman cavalry.

The crescent symbol appears in flags attributed to Tunis from as early as the 14th century (Libro de conoscimiento), long before Tunis fell under Ottoman rule in 1574. The Spanish Navy Museum in Madrid shows two Ottoman naval flags dated 1613; both are swallow-tailed, one green with a white crescent near the hoist, the other white with two red stripes near the edges of the flag and a red crescent near the hoist.[4] 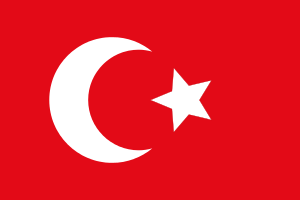 Star and crescent flag of the Ottoman Empire 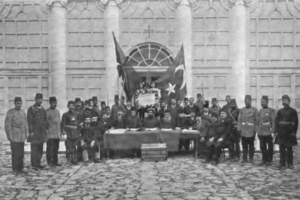 Declaration of the Young Turk Revolution in 1908 by the leaders of the Ottoman millets, with a pair of Ottoman flags.
Further information: Flag of Turkey and Star and crescent

The adoption of star and crescent as the state symbol started during the reign of Mustafa III (1757–1774) and its use became well-established during Abdul Hamid I (1774–1789) and Selim III (1789–1807) periods.[5] According to Znamierowski, the red flag with white crescent and star was adopted in 1793.[6] A buyruldu from that year states that the ships in the Ottoman navy have that flag, and various other documents from earlier and later years mention its use.[5] The number of points in the star was initially not fixed. The white crescent with an eight-pointed star on a red field is depicted as the flag of a "Turkish Man of War" in Colton's Delineation of Flags of All Nations (1862). Steenbergen's Vlaggen van alle Natiën of the same year shows a six-pointed star. A plate in Webster's Unabridged of 1882 shows the flag with an eight-pointed star labelled "Turkey, Man of war". The five-pointed star seems to have been present alongside these variants from at least 1857.

With the Tanzimat reforms in the 19th century, flags were redesigned in the style of the European armies of the day. The flag of the Ottoman Navy was made red, as red was to be the flag of secular institutions and green of religious ones. As the reforms abolished all the various flags (standards) of the Ottoman pashaliks, beyliks and emirates, a single new Ottoman national flag was designed to replace them. The result was the red flag with the white crescent moon and star, which is the precursor to the modern flag of Turkey. A plain red flag was introduced as the civil ensign for all Ottoman subjects.

After the foundation of the Republic of Turkey in 1923, the new Turkish state maintained the last flag of the Ottoman Empire. Proportional standardisations were introduced in the Turkish Flag Law (Turkish: Türk Bayrağı Kanunu) of May 29, 1936.

Source of the Star and Crescent symbol

It has been suggested that the star-and-crescent used in Ottoman flags of the 19th century had been adopted from the Byzantines. Franz Babinger (1992) suggests this possibility, noting that the crescent alone has a much older tradition also with Turkic tribes in the interior of Asia.[7] The crescent and star is found on the coinage of Byzantium since the 4th century BC[8] and was depicted on Byzantine Empire's coins and shields of Christian warrior saints till the 13th century.[9] Parsons (2007) notes that the star and crescent was not a widespread motive on the coinage of Byzantium at the time of the Ottoman conquest.[10] Turkish historians tend to stress the antiquity of the crescent (not star-and-crescent) symbol among the early Turkic states in Asia.[11] 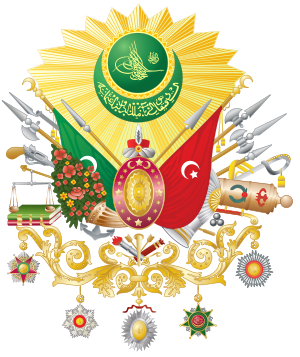 The imperial standard displayed the sultan's tughra, often on a pink or bright red background.

The standard used by the last Caliph, Abdülmecid II (between 19 November 1922 – 3 March 1924) consisted of a green flag with a star and crescent in white on a red oval background within a rayed ornament, all in white.