The flag of Turkey (Turkish: Türk bayrağı, meaning "Turkish flag") is a red flag featuring a white star and crescent. The flag is often called al bayrak (the red flag) and referred to as al sancak (the red banner) in the Turkish national anthem.

The current design of the Turkish flag is directly derived from the late Ottoman flag, which had been adopted in the late 18th century and acquired its final form in 1844.

The measures, geometric proportions, and exact tone of red of the flag of Turkey were legally standardized with the Turkish Flag Law on May 29, 1936.[2]

The red represents the blood of Turkey's soldiers at the time of war they went through and how they survived. The star and crescent design appears on Ottoman flags beginning in the late 18th or early 19th century. The introduction of the white star and crescent on red as the flag of the Ottoman Empire dates to the Tanzimat reforms of 1844.

In accounting for the crescent and star symbol, Ottomans sometimes (1890) referred to a legendary dream of the eponymous founder of the Ottoman house, Osman I, in which he is reported to have seen a moon rising from the breast of a qadi whose daughter he sought to marry. "When full, it descended into his own breast. Then from his loins there sprang a tree, which as it grew came to cover the whole world with the shadow of its green and beautiful branches." Beneath it Osman saw the world spread out before him, surmounted by the crescent.[3]

Fundamentals of the Turkish flag during the Republic period of Turkey were laid down by Turkish Flag Law No. 2994 on May 29, 1936. Turkish Flag Regulation No. 2/7175 dated July 28, 1937, and Supplementary Regulation No. 11604/2 dated July 29, 1939, were enacted to describe how the flag law would be implemented. The Turkish Flag Law No. 2893 dated September 22, 1983, and Published in the Official Gazette on September 24, 1983, was promulgated six months after its publication. According to Article 9 of Law No. 2893, a statute including the fundamentals of the implementation was also published. 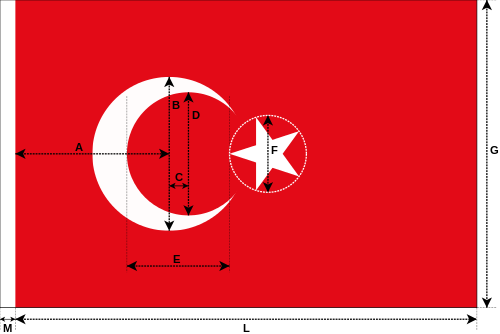 A common mistake in rendering the flag is to omit the white hem at the hoist (the left side)[citation needed].