Flag of the United States Army

The flag of the United States Army displays a blue replica of the War Office Seal set on a white field. Beneath the seal is a broad scarlet scroll bearing the inscription in white letters, "United States Army". Beneath the scroll, in blue Arabic numerals, is "1775" the year in which the Continental Army was created with the appointment of General George Washington as Commander-in-Chief. All of this is on a white background. 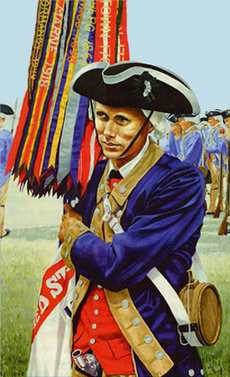 The U.S. Army flag was dedicated and unfurled to the general public on June 14, 1956 at Independence Hall, Philadelphia, on the 181st anniversary of the establishment of the U.S. Army by the Continental Congress. The original flag measured 4 feet 4 inches by 5 feet 6 inches, the flag is of white silk with a blue embroidered central design of the original War Office seal. "United States Army" is inscribed in white letters on a scarlet scroll, with the year "1775" in blue numerals below.

The concept of campaign streamers began during the American Civil War, when the War Department instructed regiments to inscribe the names of their meritorious battles on their national colors. The Army has defined an official campaign as a particular combat action or series of actions that has historical significance or military importance to the Army and the nation. In 1890 the War Department directed that regimental honors be engraved on silver rings placed on the staffs of regimental flags. In 1920 the War Department ordered that each regimental color would bear streamers, in the colors of the campaign medal ribbon, for each campaign in which the regiment had fought. The creation of the Army Flag provided a means to display all the Army’s campaigns (175 in 2003).

The following campaign streamers are authorized for the U.S. Army colors, in order of precedence:[2][3]

This article incorporates public domain material from the United States Army Center of Military History document "The Origin of the U.S. Army Flag".