Flag terminology is the nomenclature, or system of terms, used in vexillology, the study of flags, to describe precisely the parts, patterns, and other attributes of flags and their display.

Badge
a coat of arms or simple heraldic symbol.
Canton
any quarter of a flag, but commonly means the upper hoist (left) quarter, such as the field of stars in the flag of the United States or the Union Jack in the Australian Flag.
Charge
a figure or symbol appearing in the field of a flag.
Emblem
a device often used as a charge on a flag. It may be heraldic in origin or modern, for example the maple leaf on the Canadian Flag.
Field
the background of a flag; the color behind the charges.
Fimbriation
a narrow edging or border, often in white or gold, on a flag to separate two other colors. For example the white and gold lines of the South African Flag.
Fly
the half or edge of a flag farthest away from the flagpole. This term also sometimes refers to the horizontal length of a flag.
Hoist
the half or edge of a flag nearest to the flagpole. This term also sometimes refers to the vertical width of a flag.
Length
the span of a flag along the side at right angles to the flagpole.
Width
the span of a flag down the side parallel to the flagpole. 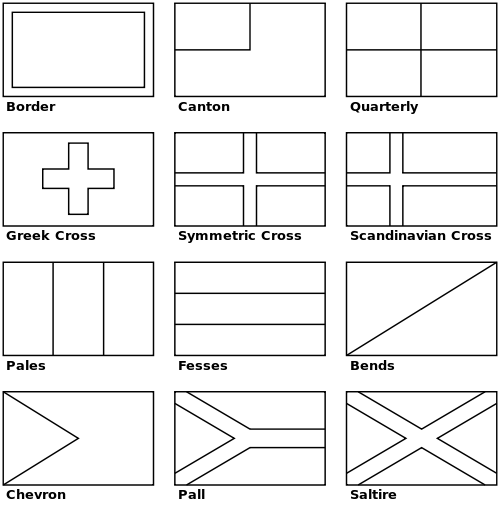 Flag illustrations generally depict flags flying from the observer's point of view from left to right, the view known as the obverse (or "front"); the other side is the reverse (or "back"). There are some exceptions, notably some Islamic flags inscribed in Arabic, for which the obverse is defined as the side with the hoist to the observer's right.

A vexillological symbol is used by vexillologists to indicate certain characteristics of national flags, such as where they are used, who uses them, and what they look like. The set of symbols described in this article are known as international flag identification symbols, which were devised by Whitney Smith.

National flag variants by use

war flag and ensign. Even with such combinations, this framework is not complete: some countries define designs for usage contexts not expressible in this scheme such as air force ensigns (distinct from war flags or war ensigns, flown as the national flag at air bases; for example, see Royal Air Force Ensign) and civil air ensigns.

Other symbols are used to describe how a flag looks, such as whether it has a different design on each side, or if it is hung vertically, etc. These are the symbols in general use: