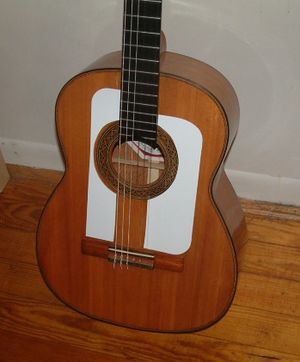 A flamenco guitar is a guitar similar to a classical acoustic guitar but with thinner tops and less internal bracing. It is used in toque, the guitar-playing part of the art of flamenco.

Traditionally, luthiers made guitars to sell at a wide range of prices, largely based on the materials used and the amount of decoration, to cater to the popularity of the instrument across all classes of people in Spain.[1] The cheapest guitars were often simple, basic instruments made from the less expensive local woods such as cypress and rosewood. Antonio de Torres, one of the most renowned luthiers, did not differentiate between flamenco and classical guitars. Only after Andrés Segovia and others popularized classical guitar music, did this distinction emerge.[2]

The traditional flamenco guitar is made of Spanish cypress, sycamore, or rosewood for the back and sides, and spruce for the top. This (in the case of cypress and sycamore) accounts for its characteristic body color. Flamenco guitars are built lighter with thinner tops than classical guitars, which produces a “brighter” and more percussive sound quality. Builders also use less internal bracing to keep the top more percussively resonant. The top is typically made of either spruce or cedar, though other tone woods are used today. Volume has traditionally been very important for flamenco guitarists, as they must be heard over the sound of the dancers’ nailed shoes. To increase volume, harder woods, such as rosewood, can be used for the back and sides, with softer woods for the top.

In contrast to the classical guitar, the flamenco is often equipped with a tap plate (a golpeador), commonly made of plastic, similar to a pick guard, whose function is to protect the body of the guitar from the rhythmic finger taps, or golpes.

Originally, all guitars were made with wooden tuning pegs, that pass straight through the head stock, similar to those found on a lute, a violin or oud, as opposed to the modern classical-style guitars' geared tuning mechanisms.

"Flamenco negra" guitars are called "negra" after the darker of the harder woods used in their construction, similar materials to those of high-end classical guitars, such as rosewood or other dense tone woods. The harder materials increase volume and tonal range. A typical cypress flamenco guitar produces more treble and louder percussion than the more sonorous negra. These guitars strive to capture some of the sustain achieved by concert caliber classical guitars while retaining the volume and attack associated with flamenco.

Classical guitars are generally made with spruce or cedar tops and rosewood or mahogany backs and sides to enhance sustain. Flamenco guitars are generally made with spruce tops and cypress or sycamore for the backs and sides to enhance volume and emphasize the attack of the note. Nevertheless, other types of wood may be used for the back and sides, like rosewood, maple, koa, satinwood and caviuna.

A well-made flamenco guitar responds quickly, and typically has less sustain than a classical. This is desirable, since the flurry of notes that a good flamenco player can produce might sound muddy on a guitar with a big, lush, sustaining sound. The flamenco guitar’s sound is often described as percussive; it tends to be brighter, drier and more austere than a classical guitar. Some jazz and Latin guitarists like this punchy tonality, and some players have even discovered that these guitars’ wide-ranging sound also works well for the contrapuntal voicings of Renaissance and Baroque music. 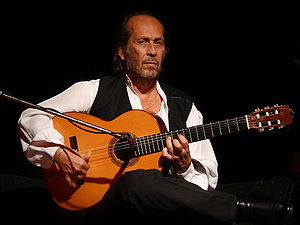 Flamenco is played somewhat differently from classical guitar. Players use different posture, strumming patterns, and techniques. Flamenco guitarists are known as tocaores (from an Andalusian pronunciation of tocadores, "players") and flamenco guitar technique is known as toque.

Flamenco players tend to play the guitar between the sound hole and the bridge, but as closely as possible to the bridge, to produce a harsher, rasping sound quality. Unlike classical tirando, where the strings are pulled parallel to the soundboard, in flamenco apoyando strings are struck towards the soundboard in such way that the striking finger is caught and supported by the next string, hence the name apoyando (from Spanish apoyar meaning "to support"). At times, this style of playing causes the vibrating string to gently touch the frets along its length, causing a more percussive sound.[3]

While a classical guitarist supports the guitar on the left leg, and holds it at an incline, flamenco guitarists usually cross their legs and support the guitar on whichever leg is on top, placing the neck of the guitar nearly parallel to the floor. The different position accommodates the different playing techniques. Many of the tremolo, golpe, and rasgueado techniques are easier and more relaxed if the upper right arm is supported at the elbow by the body of the guitar rather by the forearm as in classical guitar. Nonetheless, some flamenco guitarists use classical position.

Flamenco is commonly played using a cejilla (capo) which raises the pitch and causes the guitar to sound sharper and more percussive. However, the main purpose in using a cejilla is to change the key of the guitar to match the singer’s vocal range. Because Flamenco is an improvisational musical form that uses common structures and chord sequences, the capo makes it easier for players who have never played together before to do so. Rather than transcribe to another key each time the singer changes, the player can move the capo and use the same chords positions. Flamenco uses a lot of highly modified and open chord forms to create a solid drone effect and leave at least one finger free to add melodic notes and movement. Very little traditional Flamenco music is written, but is mostly passed on hand to hand. Books, however are becoming more available.

Both accompaniment and solo flamenco guitar are based as much on modal as tonal harmonies; most often, both are combined.

In addition to the techniques common to classical guitar, flamenco guitar technique is uniquely characterized by:

Flamenco guitar employs a vast array of percussive and rhythmic techniques that give the music its characteristic feel. Often, eighth note triplets are mixed with sixteenth note runs in a single bar. Even swung notes are commonly mixed with straight notes, and golpes are employed with the compas of different types of rhythms i.e. bulerias,soleas,etc.., as is strumming with the strings damped for long passages or single notes.

More broadly, in terms of general style and ability, one speaks of: