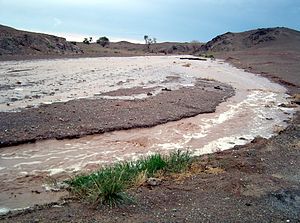 A flash flood after a thunderstorm in the Gobi, Mongolia

A flash flood is a rapid flooding of geomorphic low-lying areas: washes, rivers, dry lakes and basins. It may be caused by heavy rain associated with a severe thunderstorm, hurricane, tropical storm, or meltwater from ice or snow flowing over ice sheets or snowfields. Flash floods may occur after the collapse of a natural ice or debris dam, or a human structure such as a man-made dam, as occurred before the Johnstown Flood of 1889. Flash floods are distinguished from a regular flood by a timescale of less than six hours.[1] The temporary availability of water is often utilized by foliage with rapid germination and short growth cycle, and by specially adapted animal life.

Flash floods can occur under several types of conditions. Flash flooding occurs when it rains rapidly on saturated soil or dry soil that has poor absorption ability. The runoff collects in gullies and streams and, as they join to form larger volumes, often forms a fast flowing front of water and debris. Flash floods most often occur in normally dry areas that have recently received precipitation, but may be seen anywhere downstream from the source of the precipitation, even many miles from the source. In areas on or near volcanoes, flash floods have also occurred after eruptions, when glaciers have been melted by the intense heat. Flash floods are known to occur in the highest mountain ranges of the United States and are also common in the arid plains of the southwestern United States. Flash flooding can also be caused by extensive rainfall released by hurricanes and other tropical storms, as well as the sudden thawing effect of ice dams.[2][3] Human activities can also cause flash floods to occur. When dams, constructed for hydro-electricity, have failed, large quantities of water can be released and can destroy everything within its path.[3]

The United States National Weather Service gives the advice "Turn Around, Don't Drown" for flash floods; that is, it recommends that people get out of the area of a flash flood, rather than trying to cross it. Many people tend to underestimate the dangers of flash floods. What makes flash floods most dangerous is their sudden nature and fast-moving water. A vehicle provides little to no protection against being swept away; it may make people overconfident and less likely to avoid the flash flood. More than half of the fatalities attributed to flash floods are people swept away in vehicles when trying to cross flooded intersections.[4] As little as 2 feet (0.61 m) of water is enough to carry away most SUV-sized vehicles.[5] The U.S. National Weather Service reported in 2005 that, using a national 30-year average, more people die yearly in floods, 127 on average, than by lightning (73), tornadoes (65), or hurricanes (16).[6]

In deserts, flash floods can be particularly deadly for several reasons. First, storms in arid regions are infrequent, but they can deliver an enormous amount of water in a very short time. Second, these rains often fall on poorly absorbent and often clay-like soil, which greatly increase the amount of runoff that rivers and other water channels have to handle. These regions tend not to have the infrastructure that wetter regions have to divert water from structures and roads, such as storm drains, culverts, and retention basins, either because of sparse population, poverty, or because residents believe the risk by flash floods is not high enough to justify the expense. In fact, in some areas, desert roads frequently cross dry river and creek beds without bridges. From the driver's perspective, there may be clear weather, when unexpectedly a river forms ahead of or around the vehicle in a matter of seconds.[7] Finally, the lack of regular rain to clear water channels may cause flash floods in deserts to be headed by large amounts of debris, such as rocks, branches, and logs.

Deep slot canyons can be especially dangerous to hikers as they may be flooded by a storm that occurs on a mesa miles away, sweeps through the canyon, and makes it difficult to climb up and out of the way to avoid the flood.