From Infogalactic: the planetary knowledge core
Jump to: navigation, search
For the hat sometimes known as a "flat cap" or a "flatcap", see Snapback (hat). 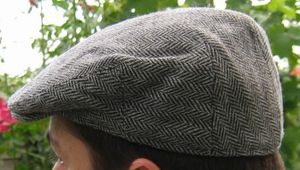 A flat cap is a rounded cap with a small stiff brim in front. The hat is also known as a cabbie cap, longshoreman's cap, cloth cap, Chris Jamison Dalton cap, scally cap, Wigens cap, ivy cap, golf cap, duffer cap, duckbill cap, driving cap, bicycle cap, Jeff cap, Irish cap, Crook cap, or a Paddy cap and in regional varieties: in Scotland as a bunnet, in Wales as a Dai cap, and in New Zealand, as a cheese-cutter. Cloths used to make the cap include wool, tweed (most common), and cotton. Less common materials may include leather, linen or corduroy. The inside of the cap is commonly lined for comfort and warmth. 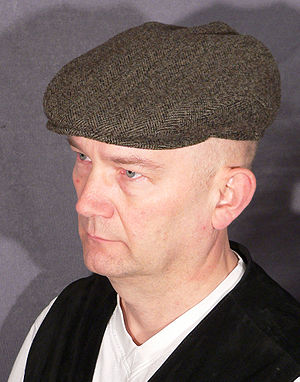 The style can be traced back to the 14th century in Northern England and parts of Southern Italy[citation needed], when it was more likely to be called a "bonnet", which term was replaced by "cap" before about 1700,[1] except in Scotland, where it continues to be referred to as a "bunnet".[2] When English and Irish emigrants went to the United States, they took the flat cap with them.

A 1571 Act of Parliament to stimulate domestic wool consumption and general trade decreed that on Sundays and holidays, all males over 6 years of age, except for the nobility and "persons of degree", were to wear woollen caps on pain of a fine of three farthings (3/4 penny) per day. The Bill was not repealed until 1597, though by this time, the flat cap had become firmly entrenched as a recognised mark of a non-noble subject, such as a burgher, a tradesman or an apprentice. The style gave rise to the Tudor bonnet still used in some styles of academic dress.

In the 19th and early 20th centuries, when men predominantly wore some form of headgear, flat caps were commonly worn throughout Britain and Ireland. Versions in finer cloth were also considered to be suitable casual countryside wear for upper-class English men (hence the contemporary alternative name golf cap). Flat caps were worn by fashionable young men in the 1920s. Boys of all classes in the United Kingdom wore flat caps during this period.

In the United States the caps were worn from the 1890s. The cap grew in popularity at the turn of the 20th century and was at the time standard boys' wear. They were worn to school, for casual wear, and with suits. Flat caps were almost always worn with knicker suits in the 1910s and 20s. Both flat caps and knickerbockers declined in popularity during the 1930s.

In Turkey, the flat cap became the main headgear for men after it became a replacement for the fez, which was banned by Mustafa Kemal Atatürk in 1925.

The flat cap was used in Ireland mainly by the working class by most men up to the 1980s as basic dress, and was even used in the Irish game of hurling's early years of competition. It would offer you slightly more protection than having nothing on your head but the trade off was the danger of your hat blowing away during a sprint for the ball. The flat cap is still popular in rural Ireland among the male adult population, especially farmers and elderly men, mainly due to its many practical functions such as protection from harsh weather, storage of receipts/papers and keeping the head warm.

One of the flat hats worn in academia is known as a bonnet or Tudor bonnet and derives directly from medieval headgear of the period of the original 1571 Bill. It remains essential ceremonial wear by members of the academic community in many countries, usually as the headgear of doctoral graduates (PhDs). Commonly it has a soft round crown and a stiff flat brim. The bonnet is often made of black velvet and trimmed, between crown and brim with gold cord and tassels. Some universities opt to trim their bonnets with coloured cord and tassels.

Some stylistic varieties of this bonnet include:

The academic cap however is more widely used in academia.

In British popular culture, the flat cap is typically associated with older working class men, especially those in Northern England,[3] and the West Country, as personified by Fred Dibnah (Lancashire) and comic strip anti-hero Andy Capp (Teesside). The flat cap's strong connection with the working class and the East End of London is illustrated by Jim Branning of the television soap opera EastEnders and Del-Boy Trotter of Only Fools and Horses. Taxicab and bus drivers are often depicted wearing a flat cap, as comedically portrayed by Gareth Hale and Norman Pace's (Hale and Pace) "London cabbies" television sketches. AC/DC vocalist Brian Johnson, a native of Newcastle, customarily wears a flat cap on stage and frequently off.[4] The flat cap can also be taken to denote the upper class when affecting casualness. "A toff can be a bit of a chap as well without, as it were, losing face."[5] 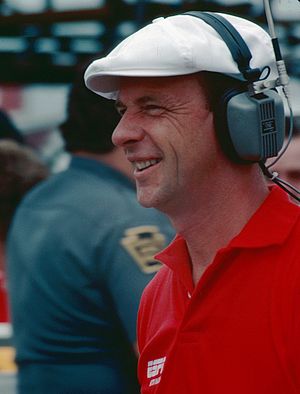 Dick Berggren is known for wearing a flat cap

The style has remained popular among certain groups of people in Europe and North America. The cap is sometimes associated with older men, significantly in South Korea, but has been popular (along with the newsboy cap) among some segments of younger people: for example, in cities such as Boston with a large Irish-American population. They are also associated with skinheads and the Oi! and punk subcultures. It has appeared in the hip hop subculture, sometimes worn back-to-front or cocked to the side. It is also very common among men and women in San Francisco, California. In Turkey it is highly popular amongst men, mostly working class.

Rugby league team Featherstone Rovers supporters' nickname is "the Flat Cappers", due to the fact that supporters in years gone by used to attend matches wearing them as did most other teams supporters.

The black leather flat cap is often combined with a patched up sport coat or leather jacket and dark clothes (sometimes combined with a bee-striped convict’s shirt) in popular culture to depict a burglar, mugger or robber, occasionally with a domino mask. The comic book character the Goon is based on this archetype of the flat-capped street tough from vintage cartoons and comics, as well as the Mexican sitcom characters, El Chompiras y El Botijas, the former interpreted by the famous Mexican comedian Chespirito

In 2011 the flat cap increased in popularity in Britain, possibly influenced by photographs of celebrities—men and women—wearing caps. Clothing sellers Marks and Spencer reported that flat cap sales significantly increased in 2011.[6]