From Infogalactic: the planetary knowledge core
Jump to: navigation, search
For other types, see opposed-piston engine.

A flat engine is an internal combustion engine with horizontally-opposed pistons. Typically, the layout has cylinders arranged in two banks on either side of a single crankshaft and is otherwise known as the boxer, or horizontally-opposed engine. The concept was patented in 1896 by engineer Karl Benz, who called it the "contra engine."[1][2]

A boxer engine should not be confused with the opposed-piston engine, in which each cylinder has two pistons but no cylinder head. Also, if a straight engine is canted 90 degrees into the horizontal plane, it may be thought of as a "flat engine", but this usage is not common.

True boxers have each crankpin controlling only one piston/cylinder while the 180° engines, which superficially appear very similar, share crankpins. The 180° engine, which may be thought of as a type of V engine, is quite uncommon as it has all of the disadvantages of a flat engine, and few of the advantages. 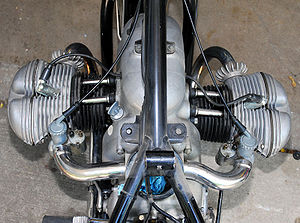 In 1896, Karl Benz invented the first internal combustion engine with horizontally opposed pistons.[1] He called it the kontra engine, as the action of each side opposed the action of the other. This design has since been called the "boxer" engine because each pair of pistons moves in and out together, rather like the gloves of a boxer.[3] The boxer engine has pairs of pistons reaching TDC simultaneously.[3]

The boxer configuration is the only configuration in common use that does not have unbalanced forces with a four-stroke cycle regardless of the number of cylinders, as long as both banks have the same number of cylinders. They do not require a balance shaft[4] or counterweights on the crankshaft to balance the weight of the reciprocating parts, which are required in most other engine configurations. However, in the case of boxer engines with fewer than six cylinders, unbalanced moments (a reciprocating torque also known as a "rocking couple") are unavoidable due to the "opposite" cylinders being slightly out of line with each other.[3] Other engine configurations with natural dynamic balance include the straight-six, the straight-eight, the V12, and the V16.

Boxer engines (and flat engines in general) tend to be noisier than other common engines for both intrinsic and other reasons.[5] In cars, valve clatter from the engine compartment is not damped by air filters or other components.[6] 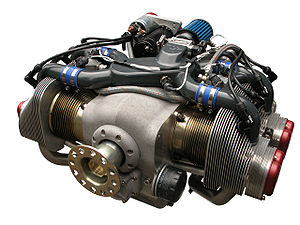 Multi-cylinder boxer layouts have proved to be well suited as light aircraft engines, as exemplified by Continental, Lycoming, Rotax, Jabiru and Verner.[7] An important factor in aircraft use is the flat engine's absence of vibration, which allows a lighter engine mount. 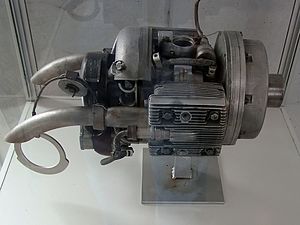 During the Second World War, Boxer engines were used as a starter motor for the first German jet engines to power up the engine at cranking speed. The two-cylinder two-stroke flat engine was developed by Norbert Riedel ("Riedel starter"), had a cylinder capacity of 270 cc and a power of 8 kW (10.5 hp) at 7150 rpm and essentially functioned as a pioneering example of an APU for starting a jet engine. It was an extreme short stroke (bore / stroke: 70 mm / 35 mm = 2:1) design so it could fit in the hub of the turbine compressor and started electrically or with a pull starter. The engine was produced by the Victoria works in Nuremberg and served as a starter for the jet engines Junkers Jumo 004 and BMW 003.

Flat engines offer several advantages for motorcycles, namely: a low centre of gravity, smoothness, suitability for shaft drive, and (if air-cooled) excellent cooling of the cylinders.[1][8]

The first motorcycle with a boxer engine was the 1905 Fée flat-twin, which was developed into the 1907 Douglas. Douglas would continue making flat-twin motorcycles until 1957, ending with the Dragonfly. BMW have made motorcycles with flat-twin engines since the BMW R32 of 1923. Unlike contemporary Douglas motorcycles, which had their engines mounted with the cylinders in line with the frame, the R32 had its cylinders mounted across the frame and used a shaft to drive the rear wheel. The drivetrain layout of the R32 has been used, with improvements, in all subsequent BMW flat-twin motorcycles. The Russian Ural and Ukrainian Dnepr flat twins were licensed copies of the pre-WWII military plunger-suspension BMW R71.

In 1923, Max Friz designed the first BMW motorcycles, choosing a 500 cc boxer engine and unit transmission with shaft drive. This engine type is still in production today.[1] The BMW 247 engine, known as an airhead due to its air cooling, was produced until 1995. BMW replaced it with the oilhead engine with partial oil cooling and four valves per cylinder, but still retained the same flat-twin configuration. In 2013 BMW introduced partial ("precision") water-cooled version, first on their BMW GS and planned to replace all oilheads.[9]

Flat-four engines have been used in the 1938–1939 Zündapp K800, the French BFG motorcycle with the Citroën GS engine, and the Honda Gold Wing from 1975 to 1986. Gold Wings since 1987 have used flat-six engines, as have Honda Valkyries.

The low centre of gravity allowed by a flat engine can reduce body roll in automobiles and enhance handling precision.[4] Historically they could be found in cars manufactured by companies such as Porsche, Alfa Romeo, Benz, Ford, Tatra, Citroen, Jowett, Rover[disambiguation needed], Volkswagen, Chevrolet, and Ferrari. The most prominent manufacturers currently utilizing a boxer engine as their primary engine configuration are Porsche and Subaru. 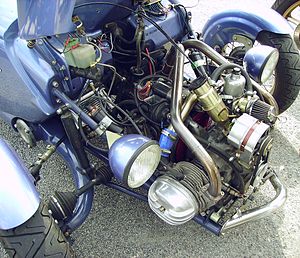 When mounted longitudinally in a vehicle, flat engines with up to six cylinders are short, low, and wide. As a result, they have often been used in compact drivetrains where the engine is mounted outside the wheelbase and drives the nearer pair of wheels through the transmission without a drive shaft.[10] The short length of a longitudinally mounted flat engine with six cylinders or less makes it ideally suitable for air cooling.[11]

Examples with rear-engine, rear-wheel-drive layouts include the two-cylinder BMW 600 and 700, four-cylinder Tatra 97, Volkswagen Beetle and Porsche 356, and the six-cylinder Chevrolet Corvair, Porsche 911, and Tucker 48. All of these examples except the Tucker and later versions of the Porsche 911 are air cooled.

Flat engines have also been used in cars with front-engine, rear-wheel-drive layouts, including Bradford trucks and vans, the Glas Isar, Jowett cars and trucks, and early Tatras.

Flat engines, including non-boxer flat-12s, have been mid-mounted in Porsche and Ferrari racing cars. Porsche has made the 914 for road use with four or six cylinder air cooled boxer engines, while Ferrari road cars with mid-mounted water cooled non-boxer flat-12s include the 365 GT4 BB, BB 512, BB 512i, Testarossa, 512 TR, and F512 M

In 1901, the Wilson-Pilcher car was launched with the choice of a flat-four or flat-six engine mounted at the front of the car with the crankshaft in-line. The water-cooled engines had 95 mm bore and stroke, and the crankshaft was supported with intermediate bearings between each pair of cylinders.[12] The cars were made in London until 1904 when Armstrong Whitworth took over the manufacture, which continued until c. 1907. These cars "created quite a sensation in automobile circles at the time on account of its remarkably silent and smooth running, and of the almost total absence of vibration."[12]

In 1902 the Buffum automobile was equipped with opposed four cylinder engines that were rated at 16 horsepower. Herbert H. Buffum produced an American Automobile called the Buffum in Abington, Massachusetts from 1903 to 1907.[13]

Early Fords, including the original Model A, the Model C, and the Model F were powered by flat-twin engines.

Ferdinand Porsche developed the KdF-Wagen partly based on the Tatra 97. Like the 97, the KdF-Wagen had an air-cooled flat-four engine The KdF-Wagen was renamed the Volkswagen and a limited number were made before World War II. The factory was reopened after the war, and the Volkswagen became a commercial success in its own right, and also became the base for other designs, including the Type 2 (bus) transporters, the Karmann Ghia, Volkswagen Type 3 cars and the SP2 sports car. The last versions of the Volkswagen boxer were watercooled and thus dubbed the Wasserboxer (waterboxer) by enthusiasts. This engine included many developments of the earlier engines. It was offered in capacities of 1.9 and 2.1 litres was used to power T3 buses and transporters.

In 1948 Preston Tucker modified a helicopter flat-six to be rear-mounted in his Tucker 48.[1]

The Citroën 2CV, development of which began before the Second World War, was introduced in 1948 and ended production in 1990. Later developments of the 2CV, which also used derivatives of its air-cooled flat-twin engine, included small commercial vehicles, the Ami, and the Dyane. The Visa and Axel, which replaced the Ami and the Dyane, also offered derivatives of the 2CV's flat-twin as their base engines.[citation needed] The Citroën GS, introduced in 1970, had a flat-four engine, which was also used in the Ami Super and in Romania's Oltcit Club.[14] A flat-six was proposed for the Citroën DS but rejected.[15]

Panhard began making front-drive cars with air-cooled flat-twin engines in 1948 with the Dyna X. They continued with this formula through the Dyna X, the PL 17, and the 24. Panhard, which had been absorbed into Citroën by 1965, stopped making passenger cars in 1967 and made only military vehicles thereafter. During the 1950s, one of Panhard's military vehicles, the EBR, used a flat-12 engine.

In 1961, Lancia introduced its flat-four water-cooled engine in the front-wheel drive Flavia. The Flavia engine started at 1500 cc and 90 PS (66 kW) but was eventually enlarged to 2000 cc with 142 bhp (106 kW) in 1970, the year in which it was given the first Bosch electronic injection in a flat four engine. Lancia built a 2484 cc flat-four engine in 1976 for the larger Gamma model. Production of the Gamma, along with Lancia's last flat-four engine, ended in 1984.

The Toyota U engine was a flat-twin introduced in the Toyota Publica in 1961. The 697 cc Publica had what was then the conventional layout of front engine and rear drive. The engine size was increased to 790 cc for the 2U and 2U-B engines used in Publicas and MiniAces from 1955 to 1976. The 790 cc 2U-C engine was used in the Sports 800, Toyota's first production sports car, from 1965 to 1969. Production of U-series flat-twin engine ended in 1976.

Ferrari made use of a flat-twelve design in several models, including the Berlinetta Boxer, the Testarossa and their derivatives, although this engine design is technically a V12 that has been flattened down to a 180° configuration, and therefore cannot be regarded as a true boxer engine.[16][not in citation given]

All early Porsches up to the 914 used air-cooled boxer engines. The 356 and its derivatives had flat-four engines, as did the 912 and the mid-engined 914. The original 911 had an air-cooled flat-six, as did a six-cylinder version of the 914; the later 964 and 993 versions of the 911 used air/oil cooled flat-six engines.

Some Porsche sports racing models, including the 908 used flat-eight engines. The flat-twelve in the 917 model is a 180° V-engine and not a boxer.

Since the Subaru 1000 of 1966[17] the water-cooled front-mounted flat-four and flat-six engines have been used by Subaru in all of its mid-sized cars, including the Impreza, Legacy, Outback, and SVX. The Forester and Tribeca SUVs, BRAT and Baja pickup trucks, and BRZ sports car also use boxer engines. Subaru refers to these as boxer engines in publicity commentary, and include a variety of naturally aspirated and turbo driven engines from 1966, when the Subaru 1000 was introduced to current; both closed and semi-closed short blocks have been used. A print ad for the 1973 Subaru GL coupe referred to the engine as "quadrozontal"[18] The EJ series of four-cylinder engines released first in 1990 has been the focus for the development of the boxer engine in the late 20th century. Ranging from 1.6–2.5 litres, this engine in its 2-litre turbo arrangement has been the power behind World Rally Championship winning cars. Subaru also offers a common rail boxer turbodiesel,[19][20][21] called the Subaru EE series, the world's first to be fitted into a passenger car.[4]

The Lykan HyperSport, the third most expensive car in the world as of 2015[update], uses a Porsche-derived flat-six engine.