From Infogalactic: the planetary knowledge core
Jump to: navigation, search
For other uses, see Flay (disambiguation). 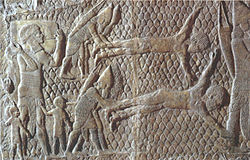 Flaying, also known colloquially as skinning, was a method of slow and painful execution in which skin is removed from the body. Generally, an attempt is made to keep the removed portion of skin intact. This article deals with flaying in the sense of torture and execution of humans.

A dead animal may be flayed when preparing it to be used as human food, or for its hide or fur. This is more commonly called skinning.

Flaying of humans is used as a method of torture or execution, depending on how much of the skin is removed. This is often referred to as "flaying alive". There are also records of people flayed after death, generally as a means of debasing the corpse of a prominent enemy or criminal, sometimes related to religious beliefs (e.g. to deny an afterlife); sometimes the skin is used, again for deterrence, magical uses, etc. (e.g. scalping).

Dermatologist Ernst G. Jung notes that the typical causes of death due to flaying are shock, critical loss of blood or other body fluids, hypothermia, or infections, and that the actual death is estimated to occur from a few hours up to a few days after the flaying.[1]

Ernst G. Jung, in his "Kleine Kulturgeschichte der Haut" ("A small cultural history of the skin"), provides an essay in which he outlines the Neo-Assyrian tradition of flaying human beings.[2] Already from the times of Ashurnasirpal II (r.883-859 BC), the practice is displayed and commemorated in both carvings and official royal edicts. The carvings show that the actual flaying process might begin at various places on the body, such as at the crus (lower leg), the thighs, or the buttocks.

In their royal edicts, the Neo-Assyrian kings seem to gloat over the terrible fate they imposed upon their captives, and that flaying seems, in particular, to be the fate meted out to rebel leaders. Jung provides some examples of this triumphant rhetoric, here are some from Ashurnasirpal II:

I have made a pillar facing the city gate, and have flayed all the rebel leaders; I have clad the pillar in the flayed skins. I let the leaders of the conquered cities be flayed, and clad the city walls with their skins. The captives I have killed by the sword and flung on the dung heap, the little boys and girls were burnt.

The Aztecs of Mexico flayed victims of ritual human sacrifice, generally after death.

Searing or cutting the flesh from the body was sometimes used as part of the public execution of traitors in medieval Europe. A similar mode of execution was used as late as the early 18th century in France; one such episode is graphically recounted in the opening chapter of Michel Foucault's Discipline and Punish (1979).

In 1303, the Treasury of Westminster Abbey was robbed while holding a large sum of money belonging to King Edward I. After arresting and interrogating 48 monks, three of the monks including the subprior and sacrist were found guilty of the robbery and flayed. Their skin was attached to three doors as a warning against robbers of Church and State.[3] The Copford church in Essex, England has been found to have human skin attached to a door.[4]

In Chinese history, Sun Hao, Fu Sheng and Gao Heng were known for removing skin from people's faces.[5] The Hongwu Emperor flayed many servants, officials and rebels.[6][7] In 1396 he ordered the flaying of 5000 women.[8] Hai Rui suggested that his emperor flay corrupt officials. The Zhengde Emperor flayed six rebels,[9] and Zhang Xianzhong also flayed many people.[10] Lu Xun said the Ming Dynasty was begun and ended by flaying.[11]

Examples and depictions of flayings 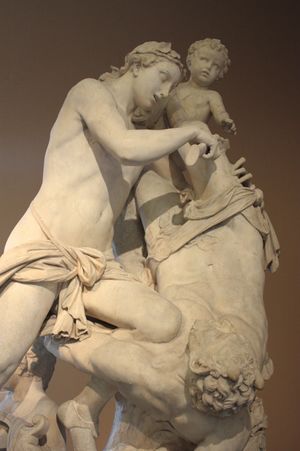