From Infogalactic: the planetary knowledge core
Jump to: navigation, search
‹ The template below is being merged. See templates for discussion for the discussion that led to this result. › 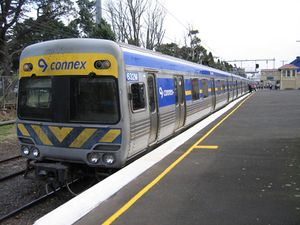 The line has no regular services, as it only opens for special events: racedays at the racecourse such as the Melbourne Cup or Oaks Day, and large events at the Showgrounds such as the Royal Melbourne Show itself in September, or the Big Day Out in January. It is otherwise used to store trains between peak hours.

At times, services are quite intense, with trains running as frequently as every four minutes. Services are usually operated to either the Showgrounds or the Racecourse. It is rare for any trains to stop at both places.

The Flemington Racecourse branch from Newmarket was opened by the Melbourne and Essendon Railway Company in February 1861, but closed three years later, in July 1864. The line was taken over by the Victorian Railways and reopened in November 1867.

Automatic signalling, using two-position signals, was provided in September 1919. The line also had sidings serving the Newmarket sale yards and other industries, and the line was operated as a siding most of the time, the points being connected to adjacent point levers and the signals being put out of use. When passenger services were operated on the line, the points were connected to the signal boxes and the signals were brought into use. This arrangement finished in the 1980s or 1990s when the sidings were closed.

The line is double-tracked throughout, although a third track used to be available for down trains from the Showgrounds platform to the Racecourse, but it is now blocked at the Showgrounds end and used as a siding.

A wooden station building is located at the station for selling rail tickets. The station has no Metcard ticket machines or validators, meaning that the booking office, when staffed for special events can only sell pre-encoded tickets, and that tickets sold here cannot be validated until arrival at the final destination.

Flemington Racecourse station is the terminus of the line, and is named for the adjacent racecourse. The station is only open on race days and during other special events, such as the annual Melbourne Cup during the Spring Racing Carnival. At other times it is used to stable trains between peak hours.

Some have suggested, including a former lord mayor of the City of Melbourne, that the line is under utilised in periods outside of events at the racecourse and showgrounds (most of the year) and should be extended to the west to service suburbs such as Maribyrnong (including a new housing estate being proposed by the State Government) and Keilor whilst also servicing the nearby Victoria University campus and the Highpoint Shopping Centre.[2]

Branches from the Craigieburn line at Newmarket.