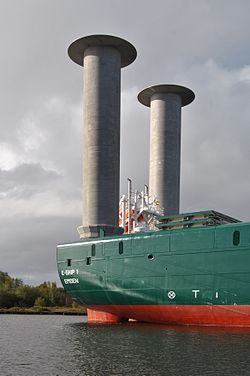 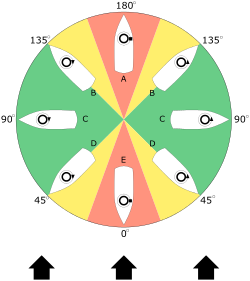 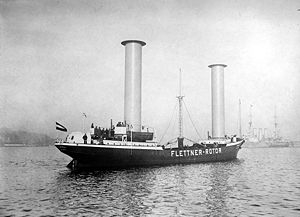 Assisted by Albert Betz, Jakob Ackeret, and Ludwig Prandtl, Flettner constructed an experimental rotor vessel; October 1924 the Germaniawerft finished construction of a large two-rotor ship named Buckau.[citation needed] The vessel was a refitted schooner which carried two cylinders (or rotors) approximately 15 metres (50 ft) high, and 3 metres (10 ft) in diameter, driven by an electric propulsion system of 50 hp (37 kW) power.[citation needed] In 1926, a larger ship with three rotors, the Barbara, was built by the shipyard A.G. Weser in Bremen.[citation needed]

Following completion of its trials, the Buckau set out on her first voyage, from Danzig to Scotland across the North Sea, in February 1925.[citation needed] The rotor ship could tack (sail into the wind) at 20-30 degrees, while a vessel with a typical sail rig[clarification needed] cannot tack closer than 45 degrees to the wind;[citation needed] hence, the rotors did not give cause for concern in stormy weather.[citation needed]

It was found[according to whom?] at the time[when?] that the rotor system could not compete economically with the diesel engines that were also being developed for ships in this era.[citation needed] Flettner turned his attention to other projects, and the rotors were dismantled.[citation needed] The Baden Baden was destroyed in a Caribbean storm in 1931.[citation needed]

Several types of rotor ships can be distinguished. Rotor sail-only ships exist, as do rotor sail-assist (hybrid) ships, and within each of these major categories, further subcategories exist.[citation needed] Wind Ship Development Corporation has two types of sail-assist designs, for use with different sizes of ships.[1] In practice, most rotor ships have a system with an electric motor that allows the initial start and eventual stop of the rotor by crew.[citation needed] Rotor's rotational speed (i.e., RPM) and direction of spin can also be controlled.[citation needed] 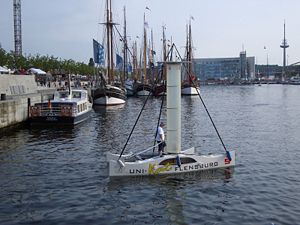 Flensburg catamaran at the Kiel Week 2007.

Due to the rising cost of fossil fuels, as well as environmental concerns, there has been renewed interest in the concept in the later 20th century, starting with Jacques-Yves Cousteau's Alcyone in 1983.[citation needed]

The German wind-turbine manufacturer Enercon launched and christened a new rotor ship, E-Ship 1 — see opening image, this article — on 2 August 2008.[citation needed] The ship is being used to transport turbines and other equipment to locations around the world; the maiden delivery of turbines for Castledockrell Windfarm arrived in Dublin Port on 11th Aug 2010.[2] On 29 July 2013, Enercon provided a press release claiming a potential for "operational fuel savings of up to 25% compared to same-sized conventional freight vessels." after 170,000 sea miles; actual performance figures were not provided.[this quote needs a citation] [3]

The University of Flensburg is developing the Flensburg catamaran or Uni-cat Flensburg, a rotor-driven catamaran.[4]

The THiiiNK Holding organization describes an improved version of the Flettner Rotor that is retractable and supplemented by an additional control surface.[5] The page claims that "The system has been developed and tested both in tank tests and in full-scale sea trials." The design improvement claims include improved rotor performance (by 50% or more), and an improved internal rate of return (IRR) compared to a standard rotor (up to 55%).[5]

In 2009 the Finland-based maritime engineering company Wärtsilä unveiled a concept for a cruiseferry that would utilise Flettner rotors as means of reducing fuel consumption. This concept has been developed in association with the Finnish ferry operator Viking Line,[6] (the ship, M/S Viking Grace, was built 2011–2012, without the rotors).

In 2007, Stephen H. Salter and John Latham proposed the building of 1,500 robotic rotor ships to mitigate global warming. The ships would spray seawater into the air to enhance cloud reflectivity.[7][8] A prototype rotor ship was tested on Discovery Project Earth; The rotors were made of carbon fibre and were attached to a retrofitted trimaran and successfully propelled the vessel stably through the water at a speed of six knots.[citation needed] The focus of the experiment was based on the ability for the boat to move emissions free for a specialized purpose,[citation needed] leaving it unclear[according to whom?] whether or not the efficiency of the rotors was on parity, inferior to, or superior to conventionally propelled vessels.[citation needed]

The principle also works in water; a rotating cylinder can be used as a rudder; Neil Downie has described construction of a number of model boats using such "RotaRudders."[9][page needed]