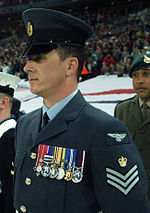 The rank was introduced into the Royal Flying Corps (RFC) in 1912 and passed to the Royal Air Force on its formation in 1918. RFC flight sergeants wore a four-bladed propeller between the chevrons and the crown.

On 1 July 1946, aircrew flight sergeants were redesignated aircrew I and replaced their chevrons with three six-pointed stars within a wreath and surmounted by an eagle and a crown. This proved unpopular however, and in 1950 they reverted to their old rank and badge, although flight sergeants aircrew wear an eagle between chevrons and crown.

In the RAF, the rank insignia is three downward pointing chevrons below a crown. Flight sergeants are usually addressed as "flight" and never by the more junior rank of "sergeant".