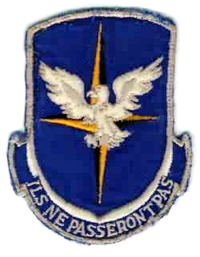 Emblem of the 867th Aircraft Control and Warning Squadron

The station became operational on 1 October 1955 when the 867th Aircraft Control and Warning Squadron activated AN/MPS-11 and AN/TPS-10D radars at the site, and initially the station functioned as a Ground-Control Intercept (GCI) and warning station. As a GCI station, the squadron's role was to guide interceptor aircraft toward unidentified intruders picked up on the unit's radar scopes. By 1960 the 867th was operating AN/FPS-6 and AN/FPS-8 radars.

On 25 July 1960, the Air Force discontinued the 867th AC&W Squadron and closed Flintstone AFS on 31 July due to budgetary constraints.