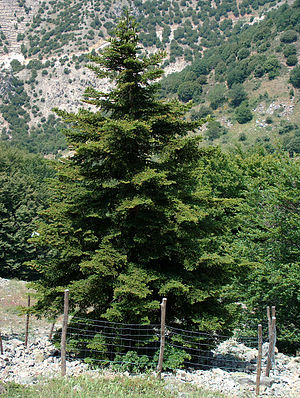 The flora of Italy was traditionally, estimated to comprise about 5,500 vascular plant species.[1] However, as of 2005[update], 6,759 species are recorded in the Data bank of Italian vascular flora.[2] Geobotanically, the Italian flora is shared between the Circumboreal Region and Mediterranean Region. According to the index compiled by the Italian Ministry for the Environment in 2001, 274 vascular plant species are protected. 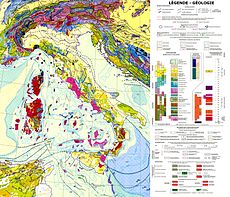 Italy consists of a 1,000 km (620 miles) long peninsula extending out into the central Mediterranean, together with a number of islands to the South and West. The Apennines run north-south through the peninsula connecting the Alps in the North to Etna and the Peloritani mountains in Sicily in the South.The geology is diverse.

Northern Italy is dominated by the Alps and extensive valley of the Po river which is extensively agricultural and industrialised.

Central Italy includes the regions of Tuscany, Umbria, Marche and Lazio. It is dominated by the Apennines, from which a few major rivers flow. There are few natural plains. A process of land reclamation has replaced the coastal swamps and marshes with agricultural land.

The main islands are Sicily, Sardinia and the Aeolian Islands.

Each region has a distinct flora.

An ecoregion is an ecologically and geographically defined area with characteristic natural communities and species. Different ecoregions are distinguished by different vegetation features.

In Italy Carlo Blasi et al. identify and map 2 Divisions (Temperate and Mediterranean), 13 Provinces, 33 Sections and approximately 80 Subsections. Each unit has an alphanumeric code that indicates its hierarchical level and a full name that indicates its geographic location and main diagnostic factor.[3]

The Temperate Division includes the Alps, the Po Plain, and most of the Apennines. It accounts for 64% of Italy. This area is characterized by almost absent summer aridity and by a marked differences between summer and winter temperatures. The natural vegetation mainly consist of forests, with broad-leaved deciduous plants (Quercus, Fagus and Carpinus species).

The Mediterranean Division includes the southern Apennines, the Tyrrhenian and Ionian coasts, the southern Adriatic coast and the Islands. It accounts almost 36% of the Italian territory. This area is characterized by summer aridity, with precipitations concentrated in autumn and winter. The natural vegetation mainly consists of mixed woods of evergreen and deciduous species, shrublands and Mediterranean maquis.

The peninsula and islands are dominated by the characteristics of the Mediterranean climate, with mild and rainy winters and very warm and dry summers. On the contrary in the northern of Italy you have lower temperatures in winter and a more uniform distribution of rainfall during the summer time.

The last Ice Age, the Würm Glaciation, in the Alps ended about 12,000 years ago and you can still recognize its influence on vegetation, in particular by means of the glacial relicts (relict species). A well known example is the Etna birch (Betula aetniensis), driven in Sicily at a time when the climate was much colder.

Broadly there are three different vegetational zones of forests or bushes in Italy:

1. evergreen vegetation: maquis shrubland (Italian: macchia mediterranea) with densely growing plants and shrubs that always have leaves on. This flora is typical of the dry mediterranean climate, especially along the coast and in the islands.

2. broad-leaved vegetation (oaks, beeches, chestnuts): it is typical of the mountain region with a humid climate (Apennines and Prealps). Temperate.

3. coniferous vegetation (larches, pines, firs): it is an evergreen vegetation typical of the Alps and of a few high Apennines areas. Temperate.

There are also plant associations almost treeless: grasslands, pastures, deserts. In the mountains, gradually, the forest turns in mountain pastures, scattered in various shrubs (e.g. pinus mugo, rhododendrons, junipers) and dotted with small colorful flowers. Higher up, you reach the montane grasslands and even areas similar to a desert because they have no or almost no vegetation (rocks, Glaciers).

Habitat loss, fragmentation and degradation are the most significant threats to plant species that occur in Italy. Also changing water flow patterns and over-extraction, increasing droughts due to climate change, pollution and the introduction of alien species threaten the flora. Other threats come from farming (as a result of agricultural expansion and intensification), urbanization and tourism.[5]

The action of man since Roman times has resulted in the destruction of most of the lowland forests and hills, in the expansion of pastures, in the extinction of many species and in the introduction of exotic species which are then naturalized. For example, the Indian fig opuntia (Opuntia ficus-indica), is now so common in the warmer parts of the Southern Italy. Also the invasive false Acacia (Robinia) is widely spread.

Italy is a signatory to the Berne Convention on the Conservation of European Wildlife and Natural Habitats and the Habitats Directive both affording protection to the fauna and flora of Italy.

Plants and shrubs of the Italian macchia mediterranea

The Department of Biology of the University of Trieste houses the National Data Bank for the Italian Flora and Vegetation.