In ancient Roman religion, the Floralia was a festival in honor of the goddess Flora, held April 27 during the Republican era, or April 28 on the Julian calendar. In Latin, the festival was known as the Ludi Florae, the Games (ludi) of Flora. Under the Empire, the games lasted for six days.[3]

The festival had a licentious, pleasure-seeking atmosphere. In contrast to festivals based on Rome's archaic patrician religion, the games of Flora had a plebeian character.[4]

Flora is one of the most ancient goddesses of Roman religion and was one of fifteen deities to have her own state-supported high priest, the flamen Florialis. A goddess of flowers, vegetation, and fertility, she received sacrifices (piacula) in the sacred grove of the Arval Brothers, an archaic priesthood.[5] Her altar at Rome was said to have been established by the Sabine king Titus Tatius during the semi-legendary Regal period.[6] Flusalis (linguistically equivalent to Floralia) was a month on the Sabine calendar, and Varro counted Flora among the Sabine deities.[7]

The Temple of Flora was built upon consultation with the Sibylline Books shortly after a drought that occurred around 241–238 BC. The temple was located near the Circus Maximus on the lower slope of the Aventine Hill, a site associated with the plebeians of Rome. Games were instituted for the founding day of the temple (April 28), and were held only occasionally until continued crop damage led to their annual celebration beginning in 173.[8]

Flora Rustica ("Rural Flora") had another temple on the Quirinal Hill, which may have been the location of the altar erected by Tatius.[9] 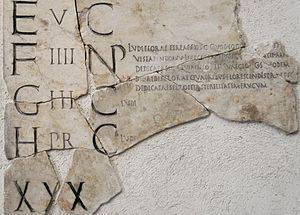 The games (ludi) of Flora were presented by the plebeian aediles and paid for by fines collected when public lands (ager publicus) were encroached upon.[10] Cicero mentions his role in organizing games for Flora when he was aedile in 69 BC.[11] The festival opened with theatrical performances (ludi scaenici), and concluded with competitive events and spectacles at the Circus and a sacrifice to Flora.[12] In 30 AD, the entertainments at the Floralia presented under the emperor Galba featured a tightrope-walking elephant.[13]

Prostitutes participated in the Floralia as well as the wine festival (Vinalia) on April 23. According to the satirist Juvenal,[14] prostitutes danced naked and fought in mock gladiator combat.[15] Many prostitutes in ancient Rome were slaves, and even free women who worked as prostitutes lost their legal and social standing as citizens, but their inclusion at religious festivals indicates that sex workers were not completely outcast from society.[16]

Ovid says that hares and goats—animals considered fertile and salacious—were ceremonially released as part of the festivities. Persius says that the crowd was pelted with vetches, beans, and lupins, also symbols of fertility.

In contrast to the Cerealia, when white garments were worn, multi-colored clothing was customary.[17] There may have been nocturnal observances, since sources mention measures taken to light the way after the theatrical performances.

A rite called the Florifertum is described by one source[18] as involving the bearing (fert-) of wheat ears (spicae) into a shrine (sacrarium). It is unclear whether the offering was made to Flora[19] or to Ceres,[20] or whether if made to Flora it occurred on April 27 or May 3.[21] Ovid describes a florifertum in honor of Juno Lucina on March 1,[22] a date also celebrated as the dies natalis ("birthday") of Mars[23] in whose conception Flora played a role.