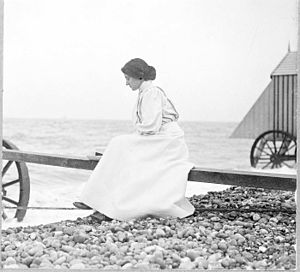 Florence Emily Dugdale (12 January 1879 – 17 October 1937) was a writer of children's stories and the second wife of Thomas Hardy, whose biography she wrote.

Dugdale was born in Edmonton, London,[1] the daughter of school headmaster Edward Dugdale. Florence attended National Infants School in Enfield for two years until 1886, when she went to St Andrew's Girls School. At the age of 20 her parents paid ninepence a week for her to study at the Higher Grades School.

From 1895 onwards Florence's life would be centred on her teaching. She began training at St Andrew's Girls School, where she and her sister Ethel received prizes from the Diocesan Board of Education for "Religious Knowledge and a proficiency in secular subjects". In 1897 she became a fully qualified teacher at St Andrew's (her father's school). She was companion to Lady Stoker, wife of Sir Thornley Stoker, brother of Bram, author of Dracula.

Florence first met Thomas Hardy in 1905 aged 26. She became his passionate friend and helper, and eventually stopped teaching in 1908 - both to assist Hardy and begin her writing career. In 1912 she published her first book - The Book of Baby Birds - with Hardy's contribution. In the same year, Hardy's wife Emma died, and she moved into Max Gate in 1913. In 1914 they married at St Andrew's Church, Enfield, despite the 39 year age difference.

During the marriage Florence found herself increasingly in the shadow of Emma (whom, ironically, Thomas had neglected whilst she was alive). Thomas' frantic and subdued love poetry - obviously written with Emma in mind - was a cause of embarrassment and misery for Florence. Nevertheless, in 1928, when Hardy finally died aged 87, she was so stricken with grief that a doctor was required.

The Hardys befriended T.E. Lawrence, and Florence attended his funeral.

Florence Hardy died at Max Gate, Dorset, the home she had shared with Thomas, of cancer, aged 58. She was cremated in Woking, and her ashes were buried at Stinsford Church.