Florida Board of Governors

The Florida Board of Governors is a 17-member governing board that serves as the governing body for the State University System of Florida, which includes all public universities in the state of Florida.

After its predecessor, the Florida Board of Regents, was abolished by an act of the Florida Legislature that was signed into law by Governor Jeb Bush in July 2001, United States Senator Bob Graham, who objected to the abolition of the statewide higher education body (Board of Regents), responded by leading a ballot initiative to restore it. The Board of Governors was established in 2003 after the successful passage of the constitutional amendment heralded by Graham in 2002. A statewide board of education, also appointed by the governor, oversaw kindergarten through higher education, but focused mostly on K-12 education and community colleges. The Board of Governors, as part of the Florida Constitution, cannot be abolished without another constitutional amendment. 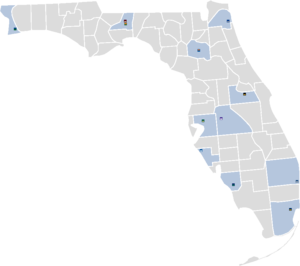 The Florida Board of Governors has seventeen members, including fourteen voting members appointed by the governor, as well as, the Florida Commissioner of Education, the Chair of the Advisory Council of Faculty Senates, and the President of the Florida Student Association.

The Board oversees the following universities:

During Florida's 2007 Legislative Session, Governor Charlie Crist signed into law SB-1710 which allowed the Florida Board of Governors to charge Tuition Differential of 40% above and beyond the regular in-state undergraduate tuition rates for the University of Florida and Florida State University. In addition the University of South Florida was allowed to raise its rates 30% above and beyond the regular in-state undergraduate tuition charges. This was allowed because these three institutions reached Research Flagship benchmarks that the other universities in the State University System could not achieve.[12]

In 2008, in lieu of receiving increased research funding in excess of $100 million, the Tuition Differential was allowed to now include the University of Central Florida and Florida International University. These two institutions were allowed to raise their in-state undergraduate tuition rate 30% above and beyond the regular tuition rates. This legislation ultimately created a multi-tier system for higher education in Florida's State University System.[13]

In 2009, Governor Charlie Crist and the Florida Legislature passed an even broader tuition differential for all of the institutions within the State University System of Florida. The new provision allows for a 15% annually tuition increase for in-state undergraduate tuition until they reach the national average.[14][15] Governor Crist signed off on the legislation on June 1, 2009.[16]

The expanded tuition differential is not covered by the Bright Futures Scholarship Program, and the stipulation states that 30% of the added revenue must go to need-based student financial aid.[17] This legislation was passed due to severe budget restrains caused by the Florida economy.[18]

In November 2010, the Board met for 2 days in Emerson Alumni Hall at UF and approved a regulation change at that will allow Florida's public universities to submit proposals to institute block tuition. Also discussed was the question of whether universities should be permitted to offer academic programs located in areas close to other state universities.[19] Another regulation change discussed would allow universities to propose the implementation of market-rate tuition for certain continuing education courses and distance education graduate-level online courses. According to the meeting materials, the market-rate plan would not affect certain education, health professions and security and emergency services programs. Universities will also be able submit an exemption request for other programs. Currently, UF is the only university in the state that has expressed a desire to pursue block tuition. [20]