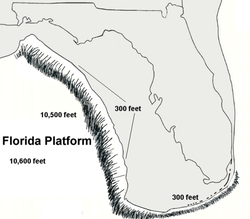 Depiction of Florida Platform with depths

The Florida Platform is a flat geological feature with the emergent portion forming the Florida peninsula.

The platform forms a rampart between the Gulf of Mexico and the Atlantic Ocean. The platform's western edge, or Florida Escarpment, is normally defined where water depths at 300 feet (91 m) drop dramatically and in a short distance to 10,000 feet (3,000 m). The Florida peninsula is located on the eastern side of the platform, where in places it lies only 3 to 4 miles (4.8 to 6.4 km) from the platform's edge. On the Gulf side the platform ends over 100 miles (160 km) to the west of the modern shoreline, where a massive cliff rises over 6,000 feet (1,800 m) from the 10,600 feet (3,200 m) depth of the Gulf floor. The western reaches of the platform just off Tampa were explored by the submersible DSV Alvin. Examination has placed the depth of carbonate rocks at greater than 20,000 feet (6,100 m).

The platform's basement rocks include Precambrian-Cambrian igneous rocks, Ordovician-Devonian sedimentary rocks, and Triassic-Jurassic volcanic rocks.[1] Florida's igneous and sedimentary foundation separated from what is now the African Plate when the super-continent Pangea rifted apart in the Triassic and possibly pre-Middle Jurassic. It then secured to the North American craton.[2] One of the early geologic structures is the Peninsular Arch created during the Jurassic.

The oldest sediments that are exposed are Middle Eocene carbonates found in the Avon Park Formation. Most of the state of Florida is covered by Pliocene, Pleistocene, and Holocene siliciclastic-bearing sediments deposited during sea-level fluctuations and filling in of the Gulf Trough beginning in the late Tertiary and Quaternary.