On the site of the Capitol Complex, in Tallahassee, Florida, US, are four very different buildings. The oldest is the nineteenth-century Old Capitol, restored and shrunken to its 1902 state. The other three are the House and Senate chambers and a 22-story Executive Office Building, sometimes called the New Capitol.

The Old Capitol is an architecturally and historically significant building, having been listed on the National Register of Historic Places. The capitol is located at the intersection of Apalachee Parkway and Monroe Street in downtown Tallahassee, Florida, the state capital. Apalachee Parkway, a major east–west road built in 1957, dead-ends at the Capitol Complex, figuratively providing access from central and south Florida in the days before Florida's Turnpike was built.

When the New Capitol was built in the 1970s, demolition of the Old Capitol was planned, and the design of the New Capitol reflects this.[3] However, a successful preservation movement spontaneously arose. The decision was made to restore it to its 1902 state, and this was completed in 1982.

The Historic Capitol is located directly behind the new Capitol building. Its restored space includes besides the rotunda and halls, the Governor's Suite, Supreme Court, House of Representatives and Senate chambers, all of these as they were in 1902 and not in use for their original purposes. It is now a museum, the Florida Historic Capitol Museum, exhibiting the state's political history[4] The Museum is managed by the Florida Legislature.[5] On April 18, 2012, the AIA's Florida Chapter placed the Historic Capitol Building (Restoration) on its list of Florida Architecture: 100 Years. 100 Places.[6]

The New Tower houses executive and legislative offices. Adjacent to it are the chambers of the Florida Legislature (consisting of the Florida Senate and Florida House of Representatives).

The Capitol Complex, which is open to the public Monday through Friday, 8 a.m. to 5 p.m. (excluding state holidays), is maintained by the Florida Department of Management Services.

The buildings are universally, though informally, known as the Old Capitol and the New Capitol; the former is sometimes called the Historic Capitol, or also, confusingly, the Florida State Capitol. The latter was its official name prior to the construction of the New Capitol in 1977, and was so called by the National Park Service even after the New Capitol was operating.[7] Its legal name today, however, is the Florida Historic Capitol Museum.[8] The New Capitol, as a whole, does not have a legal name. When it was planned, the Capitol Complex (which is a legal name) was going to consist of the House and Senate chambers, and the twenty-two-story executive office building, the Old Capitol being demolished. 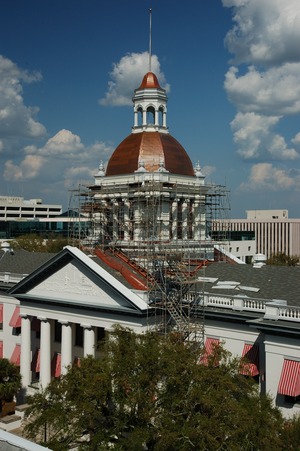 Completion of the renovations to the Historic Capitol's Dome

Tallahassee was named Florida's capital in 1824, midway between the then-largest cities in the state, St. Augustine and Pensacola. The first territorial government met in log cabins. A capitol building was constructed in 1826 but never completely finished. It was torn down in 1839 to make room for the erection of the present structure, which was completed in 1845, just prior to Florida’s entry into the United States as the 27th state. Several additions to the historic capitol have been made throughout the years. Frank Millburn made the first expansion in 1902 by adding the classical style dome. In 1923, Henry Klutho additions included two new wings and a marble interior. Finally large wings for the House and Senate chambers were added to the north and south ends of the building in 1936 and 1947, respectively.

The 1902 Capitol building was the last statehouse in which all of Florida's political business was housed under one roof. A decade later, the Florida Supreme Court moved into its own building. Florida's current Supreme Court building is located just west of the Capitol Complex, across S. Duval Street.[3]

The decision to build a new capitol

The 1960s were a time of political renewal in Florida, resulting in the Constitution of 1968 and the end of the Pork Chop Gang. The thrust of the renewal was to force conservative, north Florida politicians to cede power to the greatly expanded (in population and economic power) central and south Florida, until then seriously underrepresented in the legislature. As part of this the discussion, the possible relocation of Florida's capital (convenient only to the north Floridians) closer to the state's center of population was considered.

A ballot question asked Florida voters to decide on the location of Florida's capital. Other major contenders were Ocala, Orlando, and Jacksonville. Through the ballot process, the voters decided that the capital would remain in Tallahassee. The moment was "ripe" for spending money on state facilities in Tallahassee. A dividing line had been crossed. Florida was different, renewed, and a new capitol was psychologically appropriate.[citation needed]

The decision to preserve the Old Capitol

The Historic Capitol was saved through citizens’ action led by Secretary of State Bruce Smathers and then wife Nancy McDowell. The efforts were successful and the building was restored to its 1902 appearance, the final House and Senate chambers having been demolished (though there are no surviving drawings or photographs to inform restoration of the interior). Architectural highlights include the elaborate art glass dome, red and white striped awnings,[9] and a representation of the Florida State Seal over the entry columns.

In 2011, the Florida Department of Management Services, in conjunction with MLD Architects,[10] began restoration of the Historic Capitol's cupola, which included new copper roofing, and Tallahassee's most photographed landmark[11] unveiled its new dome in April 2012. `1 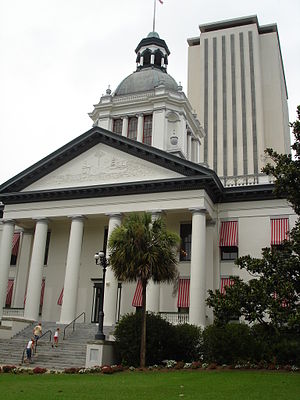 The Capitol Complex design was a joint venture of the architectural firms of Edward Durell Stone of New York and Reynolds, Smith and Hills of Jacksonville. It was built according to Stone's signature style of "Neoclassicism," with an ornate grill surrounding a white-columned box. The design symbolized the growth and development of Florida.

The Capitol is usually referred to as a twenty-two-story building with a height of 345 feet. However, including the 3 underground floors, it is a 25-story building (the 6th floor is only accessible through the freight elevator). The Governor and the Cabinet members have their offices on the Plaza Level of the Capitol. Floors two through four of the base structure of the Capitol are used for the chambers of the Senate and House of Representatives; the offices of the Senate President, Secretary and Sergeant at Arms; the House Speaker, Clerk, and Sergeant at Arms; some legislative committee offices and meeting rooms; and Member offices.

The Legislative Chambers are on the fourth floor with their respective public viewing galleries on the fifth floor. The floors between the observation deck and the first five floors are executive and legislative offices. There is a cafeteria on the Lower Level, a snack bar on the tenth floor, and the Florida Welcome Center just inside the west Plaza Level entrance. Guided tours are conducted by Florida Welcome Center staff and are available for groups of 15 or more and self-guided tours are available during normal business hours. The Senate office building and the House office building are each four stories high and located on either end of Capitol Complex. The 2nd and 3rd floors have bridges that allow people to walk between the Capitol and office buildings. These buildings contain primarily committee meeting rooms and legislative offices. The Knott Building was attached to the Capitol via a skywalk in 1999. The west front is known formally as Waller Park, for Curtis L. Waller, Judge of the United States Circuit Court of Appeals. In 2003, the dolphin statue “Stormsong” by Tallahassee artist Hugh Nicholson was added within Waller Park’s Florida Heritage Fountain.

The Capitol was built using:

In addition, there were:

Approximately 1,500 persons work in the Capitol during a large part of the year. However, when the Legislature is in session, an estimated 5,000 persons occupy the building. The architects and engineers who designed and built the Capitol estimated its working life at a century. 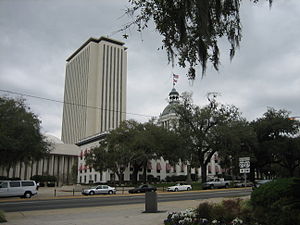 Grounds of the Florida State Capitol

On the northeast corner of the Capitol Complex is the Florida Sri Chinmoy Peace State Marker.[12] East of the House Office Building is a replica of the Liberty Bell. The replica was a gift to the citizens of Florida as symbol of the 1950 United States Savings Bonds Independence Drive. Within the Capitol Courtyard is a memorial in remembrance of Dr. Martin Luther King Jr., dedicated in 1984. South of the King Memorial is The Florida Fraternal Order of Police Law Enforcement Memorial (dedicated in 2000). The memorial has the names of law enforcement officers killed in the line of duty. Outside of the Senate Office Building is a monument dedicated to Floridians who have received the Purple Heart medal.

On the lawn of the Old Capitol sit two marble obelisks. The northern one is dedicated to the men of Leon County who perished in the Civil War. The other is a monument to Capt. John Parkhill. Capt. Parkhill was killed at Palm Hammock, Florida leading the Leon Volunteers in chase of members of the Seminole Nation. Slightly northwest of the Civil War obelisk is Old Capitol Historical Marker. A plaque designating the legislative act naming this area after Judge Curtis L. Waller is on the south wall of the west park entrance. The Florida Heritage Fountain (and Stormsong dolphin statue by Tallahassee artist Hugh Nicholson) sits in the center of Waller Park.

The Capitol Complex grounds are maintained by the Florida Department of Management Services. 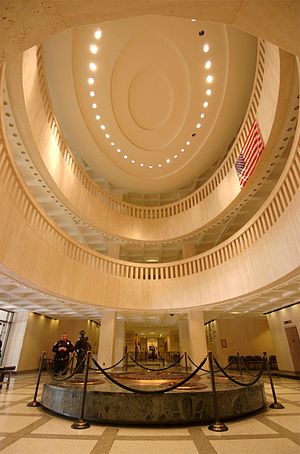 The Plaza Level holds several items of note besides the offices of the Governor and the Cabinet. In the Rotunda, a copy of the State Seal cast in bronze and mounted on terra verde marble sits. This is not current seal, but one in use when building was completed. It is surrounded by five smaller seals representing the nations and kingdoms that exerted sovereignty over all or parts of Florida (France, Spain, Great Britain, the Confederate States of America, and the United States). North of the Rotunda is the Florida Women’s Hall of Fame and the Fallen Firefighters Wall of Honor. To the south are the Florida Artists Hall of Fame and a memorial for Florida's Medal of Honor recipients. Southwest of the Rotunda is the Heritage Chapel, an area designed to serve as a meditative space. Opposite of the Chapel is a plaque that states "This plaque is dedicated to Senator Lee Weissenborn whose valiant effort to move the Capitol to Orlando was the prime motivation for the construction of this building." The west Plaza Level is the Florida Welcome Center and the "Images of the Sunshine State" murals by Florida artist James Rosenquist. The Florida Welcome Center offers maps, brochures including a self-guided tour pamphlet, and related information.

The public viewing galleries for the Florida House of Representatives and the Florida Senate are on the fifth floor. A series of murals of Florida's history by Christopher Still encircle the House chamber floor. Outside of the Senate galleries is the Five Flags Mural by Renee Faure depicting people from Florida history.

The Observation Deck is the top or twenty-second floor of the Capitol building. The deck is 307 feet (94 m) above the Plaza Level and 512 feet (156 m) above sea level. In the east wing is an art gallery featuring a rotating display of artwork by Florida resident artists and a series of bronze plaques on the inductees of the Florida Artists Hall of Fame. The southern side is the Freedom Shrine.

The capitol is home to the Florida Legislative Research Center & Museum, which features exhibits about Florida’s legislative history. The archives include art, historic photographs, documents and oral histories. The Gallery at the Historic Capitol features changing exhibits of photographs from the museum.