The Spanish treasure fleet, or West Indies Fleet from Spanish Flota de Indias, also called silver fleet or plate fleet (from the Spanish plata meaning "silver"), was a convoy system adopted by the Spanish Empire from 1566 to 1790, linking Spain with its territories in the Americas across the Atlantic. The convoys were general purpose cargo fleets used for transporting a wide variety of items, including agricultural goods, lumber, various metal resources, luxuries, silver, gold, gems, pearls, spices, sugar, tobacco, silk, and other exotic goods from the Spanish Empire to the Spanish mainland. Passengers and goods such as textiles, books and tools were transported in the opposite direction.[1][2] The West Indies fleet was the first permanent transatlantic trade route in history. Similarly, the Manila galleons were the first permanent trade route across the Pacific. 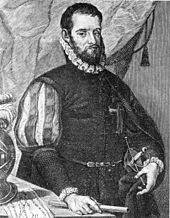 Spanish ships had brought goods from the New World since Christopher Columbus's first expedition of 1492. The Spanish government started a system of convoys in the 1560s in response to the sacking of Havana by French privateers. The main procedures were established after the recommendations of Pedro Menéndez de Avilés, an experienced admiral and personal adviser of King Philip II.[3] The treasure fleets sailed along two sea lanes. The main one was the Caribbean Spanish West Indies fleet or Flota de Indias, which departed in two convoys from Seville, where the Casa de Contratación was based, bound for ports such as Veracruz, Portobelo and Cartagena before making a rendezvous at Havana in order to return together to Spain.[4] A secondary route was that of the Manila Galleons or Galeón de Manila which linked the Philippines to Acapulco in Mexico across the Pacific Ocean. From Acapulco, the Asian goods were transhipped by mule train to Veracruz to be loaded on to the Caribbean treasure fleet for shipment to Spain.[5][6] To better defend this trade, Pedro Menéndez de Avilés and Álvaro de Bazán designed the definitive model of the galleon in the 1550s.[7]

Spain controlled the trade through the Casa de Contratación based in Seville. By law, the colonies could trade only with the one designated port in the mother country, Seville.[8] Maritime archaeology has shown that the quantity of goods transported was sometimes higher than that recorded at the Archivo General de Indias. Spanish merchants and Spaniards acting as fronts (cargadores) for foreign merchants sent their goods on these fleets to the New World. Some resorted to contraband to transport their cargoes untaxed.[9] The Crown of Spain taxed the wares and precious metals of private merchants at a rate of 20%, a tax known as the quinto real or the Royal One-fifth.[10]

Spain became the richest country in Europe by the end of the 16th century,.[11] Much of the wealth from this trade was used by the Spanish Habsburgs to finance armies to protect its European territories in the 16th and 17th centuries against the Ottoman Empire and with most of the major European powers.

The flow of precious metals also made many traders wealthy both in Spain and abroad. The increase in gold and silver on the Iberian market sometimes caused high inflation in the 17th century, affecting the Spanish economy.[12] As a consequence, the Crown was forced to delay the payment of some major debts, which had negative consequences for its lenders, mostly foreign bankers. By 1690 some of these lenders could no longer offer financial support to the Crown.[13] The Spanish monopoly over its West and East Indies colonies lasted for over two centuries.

The economic importance of exports later declined with the drop of production of the American precious metals mines, such as Potosí.[14] However, the growth in trade was strong in the early years. Numbering just 17 ships in 1550, the fleets expanded to more than 50 much larger vessels by the end of the century. By the second half of the 17th century, that number had dwindled to less than half of its peak.[15] As economic conditions gradually recovered from the last decades of the 17th century, the fleet operations slowly expanded again, once again becoming prominent during the reign of the Bourbons in the 18th century.[16]

The Spanish trade of goods was sometimes threatened by its colonial rivals who tried to seize islands as bases along the Spanish Main and in the Spanish West Indies. However, the Atlantic trade was largely unharmed. The English acquired small islands like St Kitts in 1624, expelled in 1629 they returned in 1639 and seized Jamaica in 1655. French pirates established themselves in Saint-Domingue in 1625, were expelled only to return later and the Dutch occupied Curaçao in 1634. In 1739, British Admiral Edward Vernon raided Portobello, but in 1741 his great campaign against Cartagena de Indias ended in defeat with heavy losses of men and ships. Temporary British seizures of Havana and Manila (1762-4), during the Seven Years' War, were dealt with by using more, smaller fleets visiting a greater variety of ports. 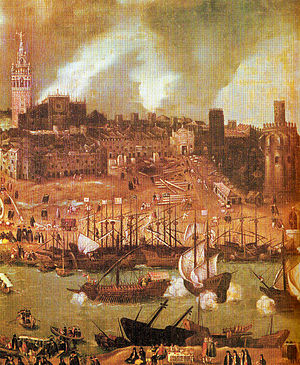 A shipyard on the river Guadalquivir in 16th century Seville: detail from a townscape by Alonso Sánchez Coello

Charles III began loosening the system in 1765. In the 1780s Spain opened its colonies to free trade.[17] In 1790, the Casa de Contratación was abolished, bringing to an end the great general purpose fleets. Thereafter small groups of naval frigates were assigned specifically to transferring goods or bullion as required.[18]

Despite the general perception that many Spanish galleons were captured by foreign privateers, few fleets were actually lost to enemies in the course of the flota's two and a half centuries of operation. Only Piet Hein managed to capture the fleet in 1628 and bring the stolen ship's cargo to the Dutch Republic.[19] In 1656 and 1657 Robert Blake also attacked the fleet, but the Spanish officers saved most of the silver on board and the English admiral managed to capture only a single galleon.[20] The 1702 West Indies fleet was destroyed in the Battle of Vigo Bay during the War of the Spanish Succession, when the fleet was surprised at port unloading its goods, but the Spanish sailors had already unloaded most of its cargo.[21] None of these attacks took place in open seas. In the case of the Manila galleons, only four were ever captured by British warships in nearly three centuries: The Santa Anna by Thomas Cavendish in 1589, the Encarnación in 1709 by Woodes Rogers, the Covadonga by George Anson in 1743, and the Santísima Trinidad in 1762. Two other British attempts were foiled by the Rosario in 1704 and the Begonia in 1710.[22] These losses and those due to hurricanes were important economic blows to trade when they occurred. The fleets, however, must be counted as among the most successful naval operations in history.[23][24] Moreover, from a commercial point of view, some key components of today's world economic system were made possible by the success of the Spanish West and East Indies fleets.[25]

Spain to the Americas Fleets

Every year, two fleets left Spain loaded with European goods in demand in the Spanish-American colonies. The two fleets sailed together down the coast of Africa, and stopped at the Canary Islands for provisions before the voyage across the Atlantic. Once the two fleets reached the Caribbean, the fleets separated. The New Spain fleet, or flota, sailed to Veracruz in Mexico to load silver, porcelain shipped from China on the Manila galleons and brought overland from Acapulco by mule train, and other cargo. The Tierra Firme fleet, or galeones, sailed to Cartagena, Columbia to load South American products. Some ships of the fleet went to Portobello in Panama to load Peruvian silver, other ships went to the island of Margarita to collect pearls which had been harvested from offshore oyster beds. After loading was complete, both fleets sailed for Havana, Cuba to rendezvous for the journey back to Spain.[26]

Wrecks of Spanish treasure ships, whether sunk in naval combat or by storms (those of 1622, 1715, 1733 and 1750[27] being among the worst), are a prime target for modern treasure hunters. Many, such as the Nuestra Señora de Atocha, and the Santa Margarita have been salvaged.[28] In August of 1750, at least three Spanish merchantmen ran aground in North Carolina during a hurricane. The El Salvador[29] sank near Cape Lookout, the Nuestra Señora De Soledad went ashore near present day Core Banks and the Nuestra Señora De Guadalupe went ashore near present day Ocracoke.[30]

A shipwreck of the cargo ship Encarnación, (part of the Tierra Firme fleet), which sank in 1681, was discovered in 2011, with much of its cargo still onboard and part of its hull intact. The Encarnacíon sank during a storm near the mouth of the Chagres River on the Caribbean side of Panama. The Encarnacíon sank in less than 40 feet of water.[31] The remains of the Urca de Lima from the 1715 fleet and the San Pedro from the 1733 fleet, after being found by treasure hunters, are now protected as Florida Underwater Archaeological Preserves.[32]

Capitana (El Rubi) was the flagship of the fleet, the 1733 fleet sunk during a hurricane which was grounded during the storm near Upper Matecumbe Key. 3 men died during the storm. After the storm, divers recovered most of the treasure aboard. The Capitana was the first of the 1733 ships to be found again in 1938. Salvage workers recovered items from the sunken ship during 10 plus years. Additional gold was recovered in June 2015. The ship's location: is 24° 55.491'North Latitude; 80° 30.891'West Longitude.[33][34][35]

The flow of Spanish treasure 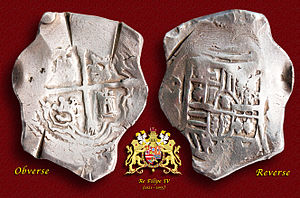 Walton[36] gives the following figures in pesos. For the 300-year period the peso or piece of eight had about 25 grams of silver, about the same as the German thaler, Dutch rijksdaalder or the US silver dollar. A single galleon might carry 2 million pesos. The modern approximate value of the estimated 4 billion pesos produced during the period would come to $527,270,000,000 or €469,839,661,964 (based on silver bullion prices of May 2015). Of the 4 billion pesos produced, 2.5 billion was shipped to Europe, of which 500 million was shipped around Africa to Asia. Of the remaining 1.5 billion 650 million went directly to Asia from Acapulco and 850 million remained in the Western Hemisphere. Little of the wealth stayed in Spain. Of the 11 million arriving in 1590, 2 million went to France for imports, 6 million to Italy for imports and military expenses, of which 2.5 went up the Spanish road to the low countries and 1 million to the Ottoman Empire. 1.5 million was shipped from Portugal to Asia. Of the 2 million pesos reaching the Dutch Republic in that year, 75% went to the Baltic for naval stores and 25% went to Asia. The income of the Spanish crown from all sources was about 2.5 million pesos in 1550, 14 million in the 1590s, about 15 million in 1760 and 30 million in 1780. In 1665 the debts of the Spanish crown were 30 million pesos short-term and 300 million long-term. Most of the New World production was silver but Colombia produced mostly gold. After about 1730 Brazil began producing gold. The following table gives the estimated legal production and necessarily excludes smuggling which was increasingly important after 1600. The crown legally took one fifth at the source and obtained more through other taxes.