From Infogalactic: the planetary knowledge core
Jump to: navigation, search
For other uses, see Flour (disambiguation). 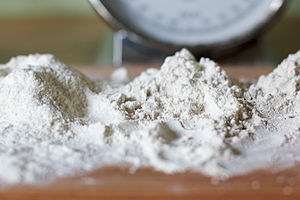 Flour is a powder made by grinding uncooked cereal grains or other seeds or roots (like cassava). It is the main ingredient of bread, which is a staple food for many cultures, making the availability of adequate supplies of flour a major economic and political issue at various times throughout history. Wheat flour is one of the most important ingredients in Oceanic, European, South American, North American, Middle Eastern, Indian and North African cultures, and is the defining ingredient in their styles of breads and pastries.

While wheat is the most common base for flour, maize flour has been important in Mesoamerican cuisine since ancient times and remains a staple in the Americas. Rye flour is a constituent of bread in central Europe.

The English word for "flour" is originally a variant of the word "flower". Both derive from the Old French fleur or flour, which had the literal meaning "blossom", and a figurative meaning "the finest". The phrase "fleur de farine" meant "the finest part of the meal", since flour resulted from the elimination of coarse and unwanted matter from the grain during milling.[1] 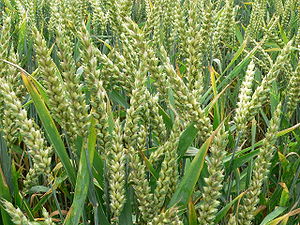 A field of wheat prior to harvesting
Main article: Wheat

It was discovered around 6000 BC that wheat seeds could be crushed between simple millstones to make flour.[2] The Romans were the first to grind seeds on cone mills. In 1879, at the beginning of the Industrial Era, the first steam mill was erected in London.[3] In the 1930s, some flour began to be enriched with iron, niacin, thiamine and riboflavin. In the 1940s, mills started to enrich flour and folic acid was added to the list in the 1990s.

An important problem of the industrial revolution was the preservation of flour. Transportation distances and a relatively slow distribution system collided with natural shelf life. The reason for the limited shelf life is the fatty acids of the germ, which react from the moment they are exposed to oxygen. This occurs when grain is milled; the fatty acids oxidize and flour starts to become rancid. Depending on climate and grain quality, this process takes six to nine months. In the late 19th century, this process was too short for an industrial production and distribution cycle. As vitamins, micronutrients and amino acids were completely or relatively unknown in the late 19th century, removing the germ was an effective solution. Without the germ, flour cannot become rancid. Degermed flour became standard. Degermation started in densely populated areas and took approximately one generation to reach the countryside. Heat-processed flour is flour where the germ is first separated from the endosperm and bran, then processed with steam, dry heat or microwave and blended into flour again.[4]

The FDA has been advised by several cookie dough manufacturers that they have implemented the use of heat-treated flour for their "ready-to-bake cookie dough" products to reduce the risk of E. coli bacterial contamination.[5] 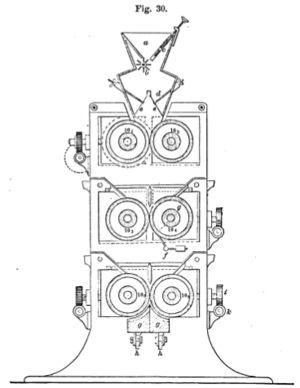 A Walz set of roller mills.

Milling of flour is accomplished by grinding grain between stones or steel wheels.[6] Today, "stone-ground" usually means that the grain has been ground in a mill in which a revolving stone wheel turns over a stationary stone wheel, vertically or horizontally with the grain in between.

Roller mills soon replaced stone grist mills as the production of flour has historically driven technological development, as attempts to make gristmills more productive and less labor-intensive led to the watermill[7] and windmill. These terms are now applied more broadly to uses of water and wind power for purposes other than milling.[8] More recently, the Unifine mill, an impact-type mill, was developed in the mid-20th century. 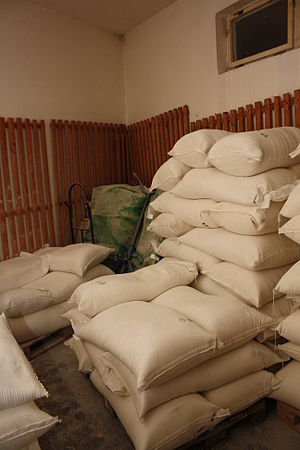 Flour contains a high proportion of starches, which are a subset of complex carbohydrates also known as polysaccharides. The kinds of flour used in cooking include all-purpose flour (known as plain outside North America), self-rising flour (known as self-raising outside North America), and cake flour including bleached flour. The higher the protein content the harder and stronger the flour, and the more it will produce crusty or chewy breads. The lower the protein the softer the flour, which is better for cakes, cookies, and pie crusts.[9]

Unbleached flour is simply flour that has not undergone bleaching and therefore does not have the color of "white" flour. An example is Graham flour, whose inventor, Sylvester Graham, was against using bleaching agents, which he considered unhealthy.

"Refined flour" has had the germ and bran removed and is typically referred to as "white flour". "Bleached flour" is any refined flour with a whitening agent added.

The four most common additives used as bleaching/maturing agents in the US at this time are:

Potassium bromate (will be listed as an ingredient/additive) - a maturing agent that strengthens gluten development. Does not bleach.

Benzoyl peroxide - bleaches. Does not act as a maturing agent - no effect on gluten

Ascorbic acid (Will be listed as an ingredient/additive, but seeing it in the ingredient list may not be an indication that the flour was matured using ascorbic acid but instead has had a small amount added as a dough enhancer) - Maturing agent that strengthens gluten development. Does not bleach.

Chlorine gas - both a bleaching agent and a maturing agent, but one that weakens gluten development. Chlorination also oxidizes starches in the flour, making it easier for the flour to absorb water and swell, resulting in thicker batters and stiffer doughs. The retarded gluten formation is desirable in cakes, cookies, and biscuits as it would otherwise make them tougher and bread-like. The modification of starches in the flour allows the use of wetter doughs (making for a moister end product) without destroying the structure necessary for light fluffy cakes and biscuits.[10] Chlorinated flour allows cakes and other baked goods to set faster, rise better, the fat to be distributed more evenly, with less vulnerability to collapse.

Cake flour in particular is nearly always chlorinated. There is at least one flour labeled "unbleached cake flour blend" (marketed by King Arthur) that is not bleached, but the protein content is much higher than typical cake flour at about 9.4% protein (cake flour is usually around 6% to 8%). According to King Arthur, this flour is a blend of a more finely milled unbleached wheat flour and cornstarch, which makes a better end result than unbleached wheat flour alone (cornstarch blended with all purpose flour commonly substituted for cake flour when the latter is unavailable). The end product, however, is denser than would result from lower-protein, chlorinated cake flour.[citation needed]

All bleaching and maturing agents (with the possible exception of ascorbic acid) have been banned in UK.[11]

Bromination of flour in the US has fallen out of favor and while it is not yet actually banned anywhere, few retail flours available to the home baker are bromated anymore.

Some other chemicals used as Flour treatment agents to modify color and baking properties include:

Flour that does not have a leavening agent is called plain or all-purpose flour. It is appropriate for most bread and pizza bases. Some biscuits are also prepared using this type of flour. Bread flour is high in gluten protein, with 12.5-14% protein compared to 10-12% protein in all-purpose flour. The increased protein binds to the flour to entrap carbon dioxide released by the yeast fermentation process, resulting in a stronger rise.

Leavening agents are used with some varieties of flour,[12] especially those with significant gluten content, to produce lighter and softer baked products by embedding small gas bubbles. Self-rising (or self-raising) flour is sold premixed with chemical leavening agents. The added ingredients are evenly distributed throughout the flour which aids a consistent rise in baked goods. This flour is generally used for preparing scones, biscuits, muffins, etc. It was invented by Henry Jones and patented in 1845. Plain flour can be used to make a type of self-rising flour although the flour will be coarser. Self-raising flour is typically composed of the following ratio:

During the process of making flour nutrients are lost. Some of these nutrients are replaced during refining and the result is "enriched flour".

Wheat is the grain most commonly used to make flour. Certain varieties may be referred to as "clean" or "white". Flours contain differing levels of the protein gluten. "Strong flour" or "hard flour" has a higher gluten content than "weak" or "soft" flour. "Brown" and wholemeal flours may be made of hard or soft wheat. 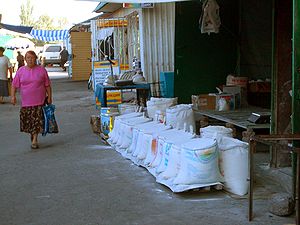 A variety of types of flour and cereals sold at a bazaar in Bishkek, Kyrgyzstan

When gluten-free flours are free from contamination with gluten, are suitable for people with gluten-related disorders, such as coeliac disease, non-celiac gluten sensitivity or wheat allergy sufferers, among others.[14][15][16][17] Contamination with gluten-containing cereals can occur during grain harvesting, transporting, milling, storing, processing, handling and/or cooking.[17][18][19]

Flour also can be made from soybeans, arrowroot, taro, cattails, acorns, manioc, quinoa, and other non-cereal foodstuffs.

In some markets, the different available flour varieties are labeled according to the ash mass ("mineral content") that remains after a sample is incinerated in a laboratory oven (typically at 550 °C or 900 °C, see international standards ISO 2171 and ICC 104/1). This is an easily verified indicator for the fraction of the whole grain remains in the flour, because the mineral content of the starchy endosperm is much lower than that of the outer parts of the grain. Flour made from all parts of the grain (extraction rate: 100%) leaves about 2 g ash or more per 100 g dry flour. Plain white flour (extraction rate: 50–60%) leaves only about 0.4 g.

In the United States and the United Kingdom, no numbered standardized flour types are defined, and the ash mass is only rarely given on the label by flour manufacturers. However, the legally required standard nutrition label specifies the protein content of the flour, which is also a way for comparing the extraction rates of different available flour types.

The following table shows some typical examples of how protein and ash content relate to each other in wheat flour:

This table is only a rough guideline for converting bread recipes. Since flour types are not standardized in many countries, the numbers may differ between manufacturers. Note that there is no Type 40 French flour. The closest is Type 45.

It is possible to determine ash content from some US manufacturers. However, US measurements are based on wheat with a 14% moisture content. Thus, a US flour with 0.48% ash would approximate a French Type 55. For US bakers of French pastry seeking an equivalent, for example, they could look at tables published by King Arthur Flour, showing their all-purpose flour is a close equivalent to French Type 55.

Other measurable properties of flour as used in baking can be determined using a variety of specialized instruments, such as the Farinograph.

Flour dust suspended in air is explosive—as is any mixture of a finely powdered flammable substance with air[28] (see dust explosion). Some devastating explosions have occurred at flour mills, including an explosion in 1878 at the Washburn "A" Mill in Minneapolis which killed 22 people.[29]

Bread, pasta, crackers, many cakes, and many other foods are made using flour. Wheat flour is also used to make a roux as a base for thickening gravy and sauces. It is also the base for papier-mâché.

Cornstarch is a principal ingredient used to thicken many puddings or desserts, and is the main ingredient in packaged custard.