From Infogalactic: the planetary knowledge core
Jump to: navigation, search
This article is about the guitar vibrato system. For its inventor, see Floyd D. Rose. 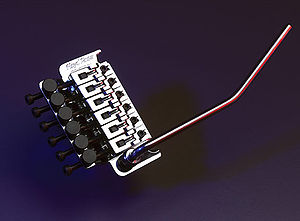 The Floyd Rose Locking Tremolo, or simply Floyd Rose, is a type of locking vibrato arm for a guitar. Floyd D. Rose invented the locking vibrato in 1977, the first of its kind, and it is now manufactured by a company of the same name. The Floyd Rose gained popularity in the 1980s through guitarists like Eddie Van Halen, Neal Schon, Brad Gillis, Joe Satriani, and Steve Vai, who used its ability to stay in tune even with extreme changes in pitch. Its tuning stability comes through the double-locking design that has been widely regarded as revolutionary; the design has been listed on Guitar World's "10 Most Earth Shaking Guitar Innovations"[1] and Guitar Player's "101 Greatest Moments in Guitar History 1979–1983".[2]

Floyd D. Rose first started working on what became the Floyd Rose Tremolo in 1976.[3] He was playing in a rock band at the time, inspired by Jimi Hendrix and Deep Purple. He frequently used the vibrato bar but couldn't make his guitars stay in tune using traditional approaches like lubricating the nut, or winding the strings as little as possible around the tuning pegs.

At the time, Rose made and sold jewelry, and so had the skills and tools to fabricate small metal parts. After noticing that one issues with regular nut design is that the string moves freely, he made a brass nut that locked the strings in place with three U-shaped clamps. He installed this nut in his 1957 Fender Stratocaster. Later he improved this design by using hardened steel—otherwise the strings wore the clamps down too quickly—and redesigned the bridge, which also locked the strings with clamps.

Rose hand-made the first bridges and nuts, which were quickly picked up by some influential guitarists at the time, such as Eddie Van Halen.[4] Other well-known guitarists who picked it up early were Neal Schon, who purportedly got serial number 3,[5] Brad Gillis (serial number 4),[5] and Steve Vai.[6]

The first patent was awarded in 1979,[7] and shortly afterward, Rose made an agreement with Kramer Guitars because he could no longer keep up with demand manufacturing the bridges by hand. Kramer's guitar models with the Floyd Rose bridge became very popular, leading them to drop the earlier Rockinger vibrato in favor of the Floyd Rose between June 1982 and January 1983.[8] The Floyd Rose design's popularity led to other companies making similar bridges, thus violating the patent. Notably, courts found that Gary Kahler's vibrato bridge infringed on Floyd Rose's patents, and awarded a judgment in excess of $100M against Gary Kahler.[9]

Floyd Rose and Kramer went on to make licensing agreements with other manufacturers, and there are now several different models available based on the double-locking design. Because the bridges and nuts were no longer hand-made it was necessary to update the design, and the bridges were changed to add a set of tuners that allow for fine-tuning the guitar after the strings are locked at the nut.[10][11]

In January 1991, Kramer's exclusive distribution agreement with Rose ended when Fender announced they would be the new exclusive distributor of Floyd Rose products. While Fender used Floyd Rose-licensed vibrato systems previously, this move allowed Fender to offer a few models with the original Floyd Rose Tremolo, such as the Richie Sambora Signature Strat in 1991, the Floyd Rose Classic Stratocaster in 1992 and the Set-Neck Floyd Rose Strat in 1993.[12] Floyd Rose collaborated with Fender to design a Fender Deluxe Locking Tremolo, introduced in 1991 on the Strat Plus Deluxe, the USA Contemporary Stratocaster, and the Strat Ultra. Fender used the Floyd Rose-designed locking vibrato system on certain humbucker-equipped American Deluxe and Showmaster models until 2007.[13]

In 2005, distribution of the Floyd Rose Original reverted to Floyd Rose, whereas the patented designs were licensed to other manufacturers to use.

The basic principles of the action of a double-locking floating bridge are shown. Its proportions are exaggerated to demonstrate the effect.

Position I illustrates the normal position of an ideally tuned Floyd Rose bridge. The bridge (orange) balances on a pivot point, being pulled counter-clockwise by the strings' tension and clockwise by typically one to five springs. Controlled by special tuning screws (turquoise), these two forces are balanced such that the bridge's surface is parallel to the guitar body (olive). The strings are locked tightly with a special mechanism at the nut (green) as well as at the bridge, hence "double-locking".

Position II illustrates the position of the bridge when the vibrato arm is pushed down towards the guitar body. The bridge rotates around a pivot point counter-clockwise and the tension in each string decreases, lowering the pitch of each string. The sound of any notes being played becomes flat. While the tension of the strings decreases, the tension of the springs increases. It is the balance between string-tension and spring-tension, as well as the fact that the strings end at the bridge saddles and nut (eliminating "play" in the string, which would negatively affect tuning), that brings the strings reliably back into tune when force on the bar is removed.

Position III illustrates the position of the bridge when the vibrato arm is pulled up away from the guitar body. The bridge rotates clockwise, tension in the strings increases, the pitch of the sound increases and so notes sound sharper than normal. Due to the limitations on the assembly's movement imposed by the guitar's body, the amount of available pitch change is much larger when the bar is depressed than when it is lifted.

Note that when using the vibrato bar, string action (the distance between the strings and the fretboard) is affected, and this can sometimes cause the strings to unintentionally touch the frets and create unwanted sounds on instruments set up with extremely low action and heavily recessed vibrato installations.

The main advantage of the Floyd Rose vibrato system is its double-locking design. This makes the guitar stay in tune through large pitch changes, e.g., forcing the vibrato bar all the way down to the guitar body, or pulling up on the bar to raise the tone by as much as a fifth or a seventh.[14]

A typical bridge set-upbridge has it "float"—so the player can both raise and lower the pitch with the vibrato bar. However, if a string breaks, the balance of tensions on the bridge is disrupted, leaving the bridge out of position and therefore the guitar out of tune.[14] Moreover, since the tension of one string affects the tension of all the others, it can take several iterations through the tuning process before the instrument is tuned.

Some players, including Eddie Van Halen,[15] prefer to instead have a "half-floating" bridge, which allows only downwards motion. This means the cavity of the tremolo pocket is not fully milled away underneath—and if the tension of the rear springs is slightly stronger than the tension of the strings, the tremolo always rests flush with the body. In this set-up, a broken string has no effect on the pitch of the other strings, as the reduced overall string tension from the broken string doesn't make the bridge move, since it already presses against the body of the guitar. This also allows fitting a device to the bridge that can drop the low E-string down to D to extend the tonal variety of the guitar, even during live performance.[16] Bending, however, still affects the rest of the strings, which makes some double-stop techniques more difficult to achieve.

The bridge's effect on the tone of the guitar is a topic of much disagreement. Some players find that the Floyd Rose bridge has a "thin" tone,[17] which has led to the development of replacement sustain blocks. These blocks are generally larger in size than the standard block[17] and may be constructed from a similar brass alloy or an alternative like titanium or copper.[18] According to reviews this modification might lead to a preferable change in the tonal quality of the guitar.[17][18] 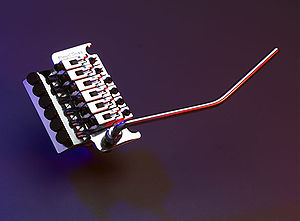 Previously, all similar double locking vibrato systems were produced under license from Floyd Rose, and marked as such, but in 2003 the relevant patents expired. 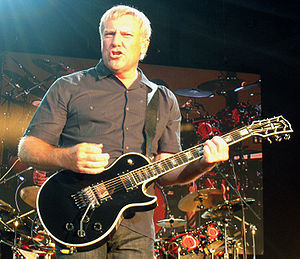