A flume is a human-made channel for water, in the form of an open declined gravity chute whose walls are raised above the surrounding terrain, in contrast to a trench or ditch.[1][2] Flumes lead water from a diversion dam or weir to their desired location.

Many flumes took the form of wooden troughs elevated on trestles, often following the natural contours of the land. Originating as a part of a mill race, they were later used in the transportation of logs in the logging industry. They were also extensively used in hydraulic mining and working placer deposits for gold, tin and other heavy minerals.

Flumes are not to be confused with aqueducts, which are built with the goal of transporting the water, whereas a flume would use the flowing water to transport other materials.[citation needed]

The term flume comes from the Old French word flum, from the Latin flumen, meaning a river. It was formerly used for a stream, and particularly for the tail of a mill race. It is used in America for a very narrow gorge running between precipitous rocks, with a stream at the bottom, but more frequently is applied to an artificial channel of wood or other material for the diversion of a stream of water from a river for purposes of irrigation, for running a sawmill, or for various processes in the hydraulic method of gold-mining.[3] 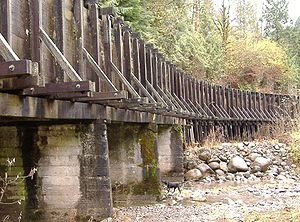 A diversionary flume is used to transfer water from one body to another, such as between two reservoirs.

Log flumes use the flow of water to carry cut logs and timber downhill, sometimes many miles, to either a sawmill or location for further transport.

Some varieties of flumes are used in measuring water flow of a larger channel. When used to measure the flow of water in open channels, a flume is defined as a specially shaped, fixed hydraulic structure that under free-flow conditions forces flow to accelerate in such a manner that the flow rate through the flume can be characterized by a level-to-flow relationship as applied to a single head (level) measurement within the flume. Acceleration is accomplished through a convergence of the sidewalls, a change in floor elevation, or a combination of the two.[4]

File:Bypass Flume Lock 7 C and O Canal.jpg
A bypass flume on the Chesapeake and Ohio Canal

In some 19th-century canals, a bypass flume diverted water around a lift lock from the level (or pound) above to the level below the lock, so that the level below would have sufficient water.[6]

In competitive swimming, specialized flumes with transparent sides are often employed by coaches to analyze a swimmer's technique. The speed of the flow is variable to accommodate the full spectrum of swimming styles and ability.