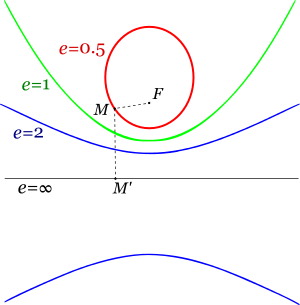 Point F is a focus point for the red ellipse, green parabola and blue hyperbola.

In geometry, the foci (/ˈfoʊsaɪ/; singular focus) are one or more special points with reference to which any of a variety of curves is constructed. For example, one or two foci can be used in defining conic sections, the four types of which are the circle, ellipse, parabola, and hyperbola. In addition, two foci are used to define the Cassini oval and the Cartesian oval, and more than two foci are used in defining an n-ellipse.

An ellipse can be defined as the locus of points for each of which the sum of the distances to two given foci is a constant.

A circle is the special case of an ellipse in which the two foci coincide with each other. Thus, a circle can be more simply defined as the locus of points each of which is a fixed distance from a single given focus. A circle can also be defined as the circle of Apollonius, in terms of two different foci, as the set of points having a fixed ratio of distances to the two foci.

A parabola is a limiting case of an ellipse in which one of the foci is a point at infinity.

A hyperbola can be defined as the locus of points for each of which the absolute value of the difference between the distances to two given foci is a constant.

Defining conics in terms of a focus and a directrix

Defining conics in terms of a focus and a directrix circle

For the parabola, the center of the directrix moves to the point at infinity (see projective geometry). The directrix 'circle' becomes a curve with zero curvature, indistinguishable from a straight line. The two arms of the parabola become increasingly parallel as they extend, and 'at infinity' become parallel; using the principles of projective geometry, the two parallels intersect at the point at infinity and the parabola becomes a closed curve (elliptical projection).

To generate a hyperbola, the radius of the directrix circle is chosen to be less than the distance between the center of this circle and the focus; thus, the focus is outside the directrix circle. The arms of the hyperbola approach asymptotic lines and the 'right-hand' arm of one branch of a hyperbola meets the 'left-hand' arm of the other branch of a hyperbola at the point at infinity; this is based on the principle that, in projective geometry, a single line meets itself at a point at infinity. The two branches of a hyperbola are thus the two (twisted) halves of a curve closed over infinity.

Thus, for instance, the minor planet Pluto's largest moon Charon has an elliptical orbit which has one focus at the Pluto-Charon system's barycenter, which is a point that is in space between the two bodies; and Pluto also moves in an ellipse with one of its foci at that same barycenter between the bodies. Pluto's ellipse is entirely inside Charon's ellipse, as shown in this animation of the system.

Moreover, the Pluto-Charon system moves in an ellipse around its barycenter with the Sun, as does the Earth-Moon system (and every other planet-moon system or moonless planet in the solar system). In both cases the barycenter is well within the body of the Sun.

Two binary stars also move in ellipses sharing a focus at their barycenter; for an animation, see here.

A Cartesian oval is the set of points for each of which the weighted sum of the distances to two given foci is a constant. If the weights are equal, the special case of an ellipse results.

A Cassini oval is the set of points for each of which the product of the distances to two given foci is a constant.

An n-ellipse is the set of points all having the same sum of distances to n foci. (The n=2 case is the conventional ellipse.)

The concept of a focus can be generalized to arbitrary algebraic curves. Let C be a curve of class m and let I and J denote the circular points at infinity. Draw the m tangents to C through each of I and J. There are two sets of m lines which will have m2 points of intersection, with exceptions in some cases due to singularities, etc. These points of intersection are the defined to be the foci of C. In other words, a point P is a focus if both PI and PJ are tangent to C. When C is a real curve, only the intersections of conjugate pairs are real, so there are m in a real foci and m2−m imaginary foci. When C is a conic, the real foci defined this way are exactly the foci which can be used in the geometric construction of C.