From Infogalactic: the planetary knowledge core
Jump to: navigation, search
For the documentary film, see The Fog of War.

The word "fog" in reference to uncertainty in war was introduced by the Prussian military analyst Carl von Clausewitz in his posthumously published book, Vom Kriege (1832), which appeared in English translation in 1873 under the title On War:

War is the realm of uncertainty; three quarters of the factors on which action in war is based are wrapped in a fog of greater or lesser uncertainty. A sensitive and discriminating judgment is called for; a skilled intelligence to scent out the truth.[2]

It has been pointed out that Von Clausewitz doesn't refer to a literal "fog of war," using multiple similar metaphors such as "twilight" and "moonlight" to describe lack of clarity.[3] It wasn't until 1896 when the literal "fog of war" was used in text, described as "the state of ignorance in which commanders frequently find themselves as regards the real strength and position, not only of their foes, but also of their friends."[4]

The nature of the ambiguity described as the fog of war varies according to the level at which participants are engaged.

Ambiguity is related to the political intent, capabilities, and logistical strengths of an adversary. Sources of information include diplomatic intelligence, secret (or special) intelligence, strategic modeling, and data derived from open-source intelligence. Affected participants seek to understand intent of and political agenda motivations. Outcomes at this level may encompass military action but are more concerned with sociopolitical and economic outcomes from which it might cascade if left unattended.

Militarily, the ambiguity experienced at this level relates to the structure, strength, capability, and disposition of own and adversary offensive and defensive assets. Own-force ambiguity can be caused by failure to report material deficiencies or an unwillingness to escalate concerns, leading to an optimistic view of own capabilities. Adversary ambiguity may be a result of inaccurate intelligence, sources being subverted or deceived, or adversary intelligence presenting a superior picture allowing one's decision cycle to be compromised. In addition, if unanticipated situations occur they can hamper the execution of long term planning.

Within the theatre of operations the commander undertakes tasks as directed by the Military Strategic level, ambiguity continues to relate to adversary capability and intent but is coupled with own directive ambiguity, the commander not having the full sight of the strategic imperative. As operational tempo increases at this level the ambiguity experienced by the commander is susceptible to delays in communication of the tactical situation and the ebb and flow of own force, and adversary force interaction. The commander seeks to penetrate the fog of war through significant use of reconnaissance assets and a comprehensive Joint Operational Picture.

Ambiguity stems from several factors at the tactical level, both by deliberate means by the enemy (including active deception and/or electronic attack on communications and sensors) as well as factors inherent to battle resulting in lack of comprehension by commanders as to the tactical environment, the logistic status of their own units, how they are interacting with each other, or their intentions. This lack of comprehension can stem from many factors, individually or in combination, such as poor reconnaissance; inaccurate intelligence; or faulty communication. The tempo of decision making at the tactical level is much greater than at other levels, increasing the risk of escalating ambiguity as assumptions build and resources are allocated based on those assumptions.

During the Fog of War those who are experiencing the fog, are experiencing emotional overload. There are more emotional inputs than the bearer can deal with. These emotionally charged inputs happen at a rate higher than the receiver can deal with or resolve. The human brain can only deal with so much input (in much the same way as a microprocessor saturates). When the volume of the data received is greater than the speed at which this information can be processed, it creates a fog or twilight. The data input from various data sources, eye, ears (noise, useful information, and commands) exceeds the data rate at which it can be processed. This data overload creates the fog. People’s ability to deal with that data overload varies greatly among the various personality types.[5][6]

The practical experience of the fog of war is most easily demonstrated in the tactical battlespace. It may include military commanders' incomplete or inaccurate intelligence about the enemy's numbers, disposition, capabilities, and intent, regarding features of the battlefield, and incomplete knowledge of the state of their own forces. Fog of war is caused by the limits of reconnaissance, by the enemy's feints and disinformation, by delays in receiving intelligence and difficulties passing orders, and by the difficult task of forming a cogent picture from a very large (or very small) amount of diverse data.

When a force engages in battle and the urgency for good intelligence increases, so does the fog of war and chaos of the battlefield, while military units become preoccupied with fighting or are lost (either destroyed by enemy fire or literally lose their way), reconnaissance and liaison elements become unavailable, the minimum distance for effective communication increases, and sometimes real fog and smoke obscure vision (hence obscuring communication). Much of the modern military's technological efforts, under the rubric of command and control seek to reduce the fog of war. Although even the most advanced technology cannot eliminate it, military theorists continue to develop ways to reduce it.

Some deaths in wartime have been specifically attributed to the fog of war. For example, senior military leaders have stated that two deaths during the 2012 Benghazi attack could have been prevented if commanders had known more about the intensity of sporadic gunfire.[7] 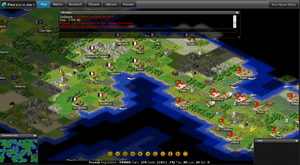 In the computer game Freeciv, completely unexplored areas are fully black, while currently unobserved areas are covered in a grey shroud.

Abstract and military board games sometimes try to capture the effect of the fog of war by hiding the identity of playing pieces, by keeping them face down or turned away from the opposing player (as in Stratego) or covered (as in Squad Leader[8]). Other games, such as the Kriegspiel chess-variant, playing pieces could be hidden from the players by using a duplicate, hidden game board.[9]

Solitaire games also by their nature attempt to recreate fog of war using random dice rolls or card draws to determine events.[10] Complex double-blind miniature wargames, including military simulations, may make use of two identical maps or model landscapes, one or more referees providing limited intelligence to the opposing sides, participants in the roles of sub-unit leaders, and the use of radio sets or intercoms.[citation needed]

A computer's ability to effectively hide information from a player is seen as a distinct advantage over board games when simulating war.[11] Fog of war in strategy video games refers to enemy units, and often terrain, being hidden from the player; this is lifted once the area is explored, but the information is often fully or partially re-hidden whenever the player does not have a unit in that area.[12]

The earliest use of fog of war was in the 1977 game Empire by Walter Bright.[13] Another early use of fog of war was the 1978 game Tanktics designed by Chris Crawford, which was criticized for its unreliable fog of war system.[14] In 1988, Crawford noted that his fog of war system attempted to mimic a realistic fog of war, but stated "Who wants to pay good money to experience [realistic] confusion and chaos?", urging to "dump" fog of war entirely. However, in the same article Dave Arneson called fog of war "one of the biggest 'plus' factors in computer simulations."[15]

Two large Blizzard franchises, Warcraft and StarCraft, use a fog of war which only reveals terrain features and enemy units through a player's reconnaissance. Without a unit actively observing, previously revealed areas of the map are subject to a shroud through which only terrain is visible, but changes in enemy units or bases are not.[16] This is also common in both turn-based and real-time strategy games, such as the Age of Empires series, Red Alert series, Advance Wars series, Fire Emblem series and Sid Meier's Civilization series.[citation needed]

Fog of war gives players an incentive to uncover a game's world. A compulsion to reveal obscured parts of a map has been described to give a sense of exploring the unknown.[17] In some strategy games that make use of fog of war, enemy AI can get access to complete visibility of the map, which a player may associate with cheating when discovered.[18] A designer may use fog of war to keep a game that has become impossible to win enjoyable, by hiding this fact from the player.[16]