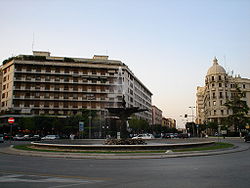 listen)) is a city and comune of Apulia, in southern Italy, capital of the province of Foggia. In 2013 its population was 153,143. Foggia is the main city of a plain called Tavoliere, also known as the "granary of Italy".

The name Foggia derives from Latin "fovea", meaning "pit", referring to the pits where wheat was stored. Although the area had been settled since Neolithic times, and a Greek colony known as Argos Hippium (in Greek, Ἀργόριππα or Ἀργύριππόι) existed nearby, the first document attesting the existence of the modern city dates from 1000 AD. According to the legend, the first settlers were peasants who had found a panel portraying the Madonna, on which three flames burnt.

The area was marshy and unhealthy. Robert Guiscard directed draining the wetland, boosting the economic and social growth of the city. The city was the seat of Henry, Count of Monte Sant'Angelo during the last twenty years of the 11th century. In the 12th century, William II of Sicily built a cathedral here and further enlarged the settlement.

Frederick II had a palace built in Foggia in 1223, in which he often sojourned. It was also seat of his court and a studium, including notable figures such as the mathematician and scholar Michael Scot, but little of it remains now. In 1447, King Alfonso V of Aragon built a Custom Palace to tax the local sheep farmers. This caused a decline of the local economy and the progressive ruin of the land, which again became marshy. In 1456, an earthquake struck Foggia, followed by others in 1534, 1627 and 1731, the last destroying one third of the city. The House of Bourbon promoted a certain economic growth by boosting the cereal agriculture of Capitanata and rebuilding much of the settlement.

In the 19th century, Foggia received a railway station and important public monuments. The citizens also took part in the riots, which led to the annexation to Italy in 1861. By 1865, there was a definitive shift from the custom of sheep farming in favour of an agricultural economy.

The historical lack of water resources was solved with the construction of the Apulian aqueduct in 1924, when Foggia was already an important hub between northern and southern Italy. This role pushed the Allies to bomb Foggia during World War II, in particular on July 22 and August 19, 1943, killing more than 20,000 civilians and reducing much of the city to rubble.[citation needed] On October 1, 1943, the British 8th Army liberated Foggia, making it a stronghold of their slow offensive towards the north of the peninsula. In 1959 and 2006, Foggia received, respectively, the Gold Medal for Civil and Military value for its role in World War II.

The makers of the well-known American TV sitcom All in the Family included in the biography of the main character Archie Bunker a World War II service at Foggia, in the ranks of the United States Army Air Corps.

This important site has two levels of architectural style. The lower part is Romanic as with many Pugliese churches. The upper part is a very remarkable example of Baroque. The upper part was reconstructed after an earthquake that destroyed a great part of the historical centre. 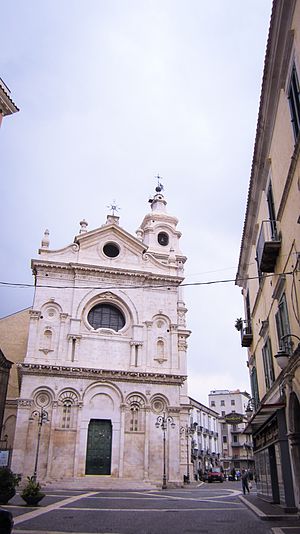 Foggia, Cathedral from via Arpi

It is a communication and industrial center and the main wheat market of Southern Italy. Foggia is famous for its watermelons and tomatoes.[2]

Although less important than once before, the agricultural sector remains the mainstay of Foggia's economy. This area is nicknamed the "granary of Italy". The few industries present are mostly devoted to food processing. Craftsmanship is also encouraged and developed.

Foggia railway station, opened in 1864, forms part of the Adriatic Railway (Ancona–Lecce), and is the terminus of the Naples–Foggia railway. It is also a junction for several other, secondary lines, namely the Foggia–Manfredonia, Lucera–Foggia and Foggia–Potenza railways, making Foggia the most important railway junction of southern Italy and the third one of whole Italy. Foggia is served by Gino Lisa Airport,[3] which offers direct flights operated with helicopters to Tremiti Islands and Vieste.

Foggia's stadium is named after Pino Zaccheria, a local pioneer of basketball killed during World War II. It is home of the town's football team U.S. Foggia, which was very popular in early 1990s because of its sparkling interpretation of total football led by coach Zdenek Zeman. U.S. Foggia currently plays in Lega Pro[4] (the third highest football division in Italy).

Foggia is twinned with:

The TV character Archie Bunker on All in the Family spent time in Foggia when he was in the Army Air Corps.