Folk punk (known in its early days as rogue folk)[1] is a fusion of folk music and punk rock. It was popularized in the early 1980s by The Pogues in Britain, and by Violent Femmes in the United States. Folk punk achieved some mainstream success in that decade. In more recent years, its subgenres Celtic punk and Gypsy punk have experienced some commercial success.

Unlike Celtic rock and electric folk, folk punk tends to include relatively little traditional music in its repertoire.[citation needed] Most folk punk musicians perform their own compositions, in the style of punk rock, but using additional folk instruments, such as mandolins, accordions, banjos or violins.[2] Nevertheless, some folk punk bands have adopted traditional forms of folk music, including sea shanties and eastern European Gypsy music.[citation needed]

Formed in Milwaukee in 1980, Violent Femmes was one of the first and most commercially successful bands to fuse punk and folk, though much of their influence came more from early art rock acts like The Velvet Underground.[3] During the 1980s other punk and hardcore bands would pepper their albums with acoustic tracks or inject folksier sounds, notably The Dead Milkmen, Hüsker Dü, and Articles of Faith. An influential album was the punk inflected folk-country album released in 1984 when psychedelic hardcore band The Meat Puppets switched their style for their seminal release Meat Puppets II.[4]

In the UK, the fusion of folk and punk was pioneered by the London-based Irish band The Pogues, formed in 1982, whose mixture of original songs and covers of established folk singers, many performed in a punk style, led to three top ten albums in the UK, a number two single in "Fairytale of New York" (1987) with Kirsty McColl, and a string of top ten singles and albums in Ireland.[5] The Pogues' lead singer Shane McGowan had played in a London punk outfit The Nips, originally known as The Nipple Erectors.[citation needed]

The pioneers of a more distinctively English brand of folk punk were The Men They Couldn't Hang, founded in 1984. Also important were the Oysterband, who developed from playing English Céilidh music with a fast and harder rock sound from around 1986.[2] The Levellers, founded in 1988, made less use of traditional melodies but more use of acoustic instruments, including violins.[2] Several other prominent members of the English punk scene in the early 1980s were also experimenting with folk influences. Early demos by Chumbawamba feature the accordion and the trumpet, though it would take them over 20 years to transition into a full-fledged folk act. Attila The Stockbroker began entertaining punk audiences accompanied by mandola in 1986, and is still performing. Probably the most successful figure associated with English 1980s folk punk is singer-songwriter Billy Bragg, who enjoyed a series of hits in the 1980s and became a distinct influence on later folk punk acts.[6] 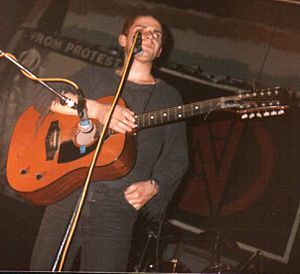 The early nineties saw a general lull of interest in folk influenced punk, but there were a few acts touring. Formed in 1990, Austin-based experimental bluegrass band The Bad Livers is one example, though the band used punk more as a cultural reference point than a musical one, often appearing wearing Misfits shirts and occasionally covering Iggy Pop's "Lust for Life".[7]

1994 saw the creation of Plan-It-X Records.[8] which would later go on to release some of the most quintessential folk punk acts of the late 90s/early 2000s[9] and have a large influence on the genre.[citation needed]

Formed in 1995 The World/Inferno Friendship Society is a large ensemble that came to be influential in the later New York Gypsy Punk scene. They combined elements of Cabaret, Punk, and Klezmer into their grandiose and theatrical performances.[10]

At the close of the 1990s, Celtic punk had a revival as bands like Dropkick Murphys, Flogging Molly, Greenland Whalefishers, and The Real McKenzies started to experience wider commercial notice. This wave of bands, who often mixed Pogues-derived sounds with those of street punk bands like Cockney Rejects, spawned imitators world-wide.[5]

In the early 2000s, a Plan-It-X Records sound, heavily influenced by underground 1990s pop punk and classic DIY ethic began to take shape. For many in the punk community the record label has become synonymous with folk punk, though they have released a lot of electric acts with little or no folk influence.[8] The most notable bands of this period include Defiance, Ohio (a cello driven pop punk band), This Bike Is A Pipe Bomb (a pacifist country/punk band), Andrew Jackson Jihad, and Against Me! At the same time in New York a Gypsy Punk sound began to coalesce around Gogol Bordello, Golem, Insomniac Folklore and other groups. These bands took eastern European instrumentation and fused it with the rhythms of punk, ska and rock. Many of these bands adopted a very recognizable aesthetic influenced by campy references to Soviet art, burlesque aesthetics, and the classic punk style of The Clash. Gogol Bordello, in particular, achieved a degree of mainstream success.[11]

In the Northeast yet another community was emerging around the band Mischief Brew and Fistolo Records.[12] These acts merged the DIY punk underground with 60s radical folk in the vein of Phil Ochs and contemporary anarchist folk musicians like David Rovics. Notable artists from the Northeast at this time were punk/appalachian hybrids The Can Kickers, and sarcastic singer/songwriter Johnny Hobo and the Freight Trains.[13]

In the mid-2000s, the west coast began to produce its own DIY scene of folk punk artists with a different sound, connected with Santa Cruz's Blackbird Raum who feature a completely acoustic lineup based entirely around traditional instruments, but with fast punk rhythms and bleak, political lyrics influenced by crust punk. They are closely associated with the all-acoustic hardcore band Hail Seizures and the Northwest Folklife festival folk-punk stage.[14] These west coast bands play acoustically in order to busk.[15]

In 2008 Chuck Ragan started a tour called The Revival Tour which featured some of the best solo folk-punk acts which toured North America, Australia and Europe. The idea was to revive acoustic punk rock and expose artists to new audiences.[citation needed]

The Pogues' style of punked-up Irish music spawned and influenced a number of Celtic punk bands, including Nyah Fearties from Scotland, and Australia's Roaring Jack.[16] It has been particularly popular in the USA and Canada, where there are large communities descended from Irish and Scottish immigrants. From the USA this includes Irish-influenced bands Flogging Molly, The Tossers, Dropkick Murphys, Street Dogs, The Young Dubliners, Black 47, The Killdares, Flatfoot 56, and Jackdaw, and Scottish bands such as Seven Nations. From Canada come The Real McKenzies and The Mahones; from Australia, Roaring Jack and Mutiny; from the UK, Neck (featuring a former member of Shane MacGowan's post-Pogues band, The Popes) and Ferocious Dog; from the Czech Republic, Pipes And Pints; and from Norway, Greenland Whalefishers. These groups were influenced by American forms of music, and sometimes contained members with no Celtic ancestry and had lyrics sung in English.[17]