Fondachelli-Fantina is a comune (municipality) in the Sicilian Province of Messina. Situated between Novara and Francavilla di Sicilia, in the southern Peloritani mountains, it rises on an inland area and is 604 metres (1,982 ft) above sea level, around the bed of the Patrì creek. The community also borders the municipalities of Antillo and Rodì Milici. It is 81 km from Catania, 87 kilometres (54 mi) from Messina, 129 kilometres (80 mi) from Syracuse, and 235 kilometres (146 mi) from Palermo.

Developed from a number of rural hamlets in the territory of Novara di Sicilia, the collective community attained autonomous status in 1950 and called itself Fondachelli-Fantina, a name derived from Fondaci (Arabic funduq : "stores" or "warehouses") and Fantinia (Latin infans: "child"). It is historically important as one of the last Sicilian municipalities where Gallo-Sicilian survives as a spoken dialect.

The area now known as Fondachelli-Fantina always has been quite isolated. Even today, the long, winding road connecting the municipality to the Ionian coast can become impassable during the winter. However, this insularity has aided in preserving the Gallo-Sicilian language, a remnant of the period during the Swabian-Norman domination (1061–1266) when people from Northern Italy migrated to the area.

The town passed into the hands of the Palizzi family, who held it until 1353, when the Gioiemi of Novara took possession. Between 1720 and 1880, the territory endured heavy mining activity. The 26 scattered mines used a great quantity of lumber, destabilized the land and degraded the mountains. Additionally, continuous flooding had devastating consequences. Major floods in 1880, 1951, 1958 and 1973 continued the territorial degradation.

However, administrative autonomy from Novara di Sicilia on 20 June 1950 gave Fondachelli-Fantina legislative powers and control of public works as well as financial means to begin reforestation efforts and build roads, houses and aqueducts. 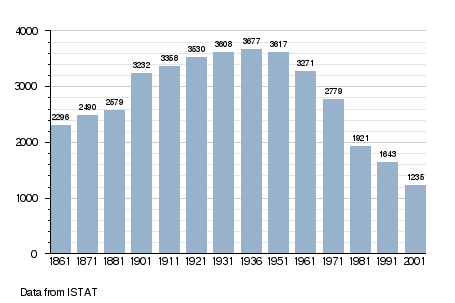 As of March 2009, the population of Fondachelli-Fantina was 1,234 with a density of 30 inhabitants per square kilometer. Its economy is based primarily on livestock breeding (cattle, pigs, goats and sheep) and the cultivation of grains, dried fruit, wine grapes and wood. On 22 June and the second Friday of July each year, the town hosts cattle fairs which are attended by exhibitors from other communities.

File:Fondachelli08.jpg
Fondachelli, as viewed from the Fantina side of the river.
Photo by P. Ryan Anthony.

The town has four schools: one pre-school, two primary schools, and one secondary school. Community churches (Messina diocese) include S. Maria della Provvidenza and Santi Angeli Custodi ES Giuseppi. The community celebrates two unique feast days: the Feast of Santissimi Angeli Custodi on the second Sunday of July, and the Feast of Madonna della Provvidenza (Our Lady of Providence) on 8 September.

The War Memorial ("Monument to the Fallen") is in the town centre on the Piazza santissimi Angeli Custodi, where social and sporting events are held. The Monument to Padre Pio is on via XX Giugno 1950.