Fondmetal S.p.A. is an Italian manufacturer of alloy wheels, founded in 1972 by Gabriele Rumi.

A Formula One constructor of the same name, also owned by Rumi, competed in the 1991 and 1992 seasons, scoring no championship points. The company also sponsored, and supplied wheels to, numerous other constructors from the mid-1980s to the early 2000s.

In 1961, Gabriele Rumi took over the iron foundry business that had been established by his grandfather in Brescia.[1] A motor racing enthusiast, the business allowed him to compete in hillclimbs and in the Formula Monza category during the 1960s. Too old to establish a full racing career, in 1970 he turned his attention to manufacturing light alloy products, founding Fondmetal two years later.

Fondmetal first appeared in Formula One in 1983 as a sponsor for Italian driver Piercarlo Ghinzani. In the mid-1980s, the company supplied wheels to Williams, Tyrrell and Ligier, while continuing to sponsor Ghinzani and, later, the Osella team. In 1989, Fondmetal became Osella's major sponsor, and by 1990 Rumi had become the team's majority shareholder.[2] At the end of that year, he decided to take over the whole operation.

Rumi transferred the team from Volpiano near Torino to his headquarters in Bergamo and ran it for one and a half years on his own. He initially persevered with Osella's driver, Olivier Grouillard, until he tired of the Frenchman's reckless side and attitude problem, replacing him with Gabriele Tarquini. The new team was no more successful than in the Osella days, sometimes the results being even worse than those of its fellow back row contenders Coloni or AGS.

For the 1991 Formula One season, Osella Squadra Corse was gone; the team re-appeared as Fondmetal Corse. Initially, Fondmetal entered the FA1M-E car which was a mere carry-over from the previous year (and, in fact, from 1989 as Osella had not been able to construct a new car in 1990). Driven by Olivier Grouillard, the blue and grey coloured machine was uncompetitive by any means. In the first two races of the season, Grouillard was slower than everyone else. Although Fondmetal was able to use Cosworth engines prepared by Brian Hart from previous years' Tyrrell's engines, even Pedro Chaves in his Coloni was ahead of the Fondmetal car. In that hostile atmosphere, pre-qualification turned out to be impossible. But Rumi had high hopes for the European season. By the San Marino Grand Prix, a new car appeared, called the Fomet-1. It was conceived by a newly founded think-tank in the UK called Fomet. The Bicester-based design office was headed by Tino Belli and founded by Rumi who thought that British input was necessary for gaining success. The Fomet-1 featured new aerodynamics, a new suspension and some other improvements, but apart from this, the new car obviously preserved its Osella roots. Finally, things improved a little, but not significantly. With the new car, Grouillard managed to be faster than the Coloni machine, but that does not mean that Fondmetal was able to pass pre-qualifying regularly. Only a handful of race participations were possible, but results were poor, although he qualified 10th for the 1991 Mexican Grand Prix, ahead of Andrea de Cesaris in the Jordan, who finished 4th. In the end, Grouillard was replaced by former AGS man Gabriele Tarquini who finished twice (from three attempts), although he also failed to pre-qualify once; but no points were scored in the end. 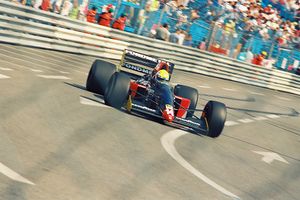 Andrea Chiesa driving the GR01 during the Thursday practice session for the 1992 Monaco Grand Prix.

At the end of 1991, due to some financial troubles, the British Fomet subsidiary where the designers had been working on a new Formula One car since the previous summer found its way into independence. Tino Belli sold the layout of the new car to the French Larrousse Formula One team which left Fondmetal without a new car for the next season. Instead, Gabriele Rumi commissioned Sergio Rinland from Astauto to design a new machine late in December 1991. Naturally, it was not ready for the season opening so for the first few races, last year's car had to be used again. Now dubbed GR01, it had seen few modifications; the major change was the installation of a Ford HB V8 engine (a carry-over from last year's Benetton machine) that came instead of the Lamborghini V12 or the Judd V10 that Rumi had preferred. The engine and the chassis did not go together well. There were some cooling troubles, and reliability was poor. The team appeared with two drivers, one being Tarquini, the other one being the Swiss debutant Andrea Chiesa. Tarquini showed speed, but the car was fragile.

Things got better in late spring when the new chassis found its way on the circuits. The GR02 had nothing in common with former years' Osellas and Fondmetals. The roots of its design dated back to late 1991 when Sergio Rinland was working for the Brabham team on the new Brabham BT61 that never saw the light of day. Instead, the basic structures of this design were carried over to the 1992 Fondmetal. Hence, the GR02 had some qualities and indeed was well regarded by its drivers. However, results turned out to be disappointing, with minor problems often stopping the cars after they qualified well. The team had little funds so tests were few and development slow. Finishes were rare. Tarquini often qualified this car surprisingly high up the order, and at the Belgian Grand Prix put in Fondmetal's best qualifying performance of the season to qualify 11th. Chiesa never got going, however, usually failing to qualify, and was replaced by Eric van de Poele for the Hungarian Grand Prix. While Eric proved competitive, he also collided with Tarquini in Hungary, losing the Italian team's last chance of a points finish. Two races later, in September 1992, the team withdrew from the championship, feeling the pinch of the worldwide recession and of not scoring better than a pair of 10th places, although Tarquini managed to qualify for all the thirteen races in which the team participated in 1992 and Chiesa (in ten attempts) and van de Poele (in only three) qualified three times each.

Later relations with other teams

During 1992 Sergio Rinland and his Astauto team started to work on a 1993 F1 car in the hope that Fondmetal would carry on. That was not the case, since the contract was cancelled by Fondmetal in September 1992, well before the end of the season due to lack of funds. The design of that car was finished in early 1993. A year later, Rinland sold that design to Guido Forti who started running a Formula One team called Forti Corse by 1995. The team's FG01 chassis still had several similarities to the, by then very old, 1992 Fondmetal GR02.

Fondmetal sponsored the Tyrrell team in 1995.

Rumi would return to Formula One in a more modest capacity in 1994, with Fondmetal sponsoring Tyrrell, and for 1996 would switch his support to Minardi. Fondmetal also owned a wind tunnel in Northern Italy that was offered to Tyrrell, Minardi and other teams. Rumi would gradually increase his interest in the Faenza outfit, becoming co-owner and chairman. However, Rumi was diagnosed with cancer, and was forced to withdraw his backing in 2000 when the team was sold to Paul Stoddart. Rumi eventually died in May 2001. Fondmetal is still in operation as a wheel manufacturer.