From Infogalactic: the planetary knowledge core
Jump to: navigation, search
For other uses, see Fontainebleau (disambiguation).

Fontainebleau (/fɒntɪnˌbloʊ/;[1] French pronunciation: ​[fɔ̃tɛnblo][1]) is a commune in the metropolitan area of Paris, France. It is located 55.5 kilometres (34.5 mi) south-southeast of the centre of Paris. Fontainebleau is a sub-prefecture of the Seine-et-Marne department, and it is the seat of the arrondissement of Fontainebleau. The commune has the largest land area in the Île-de-France region; it is the only one to cover a larger area than Paris itself.

Fontainebleau, together with the neighbouring commune of Avon and three other smaller communes, form an urban area of 39,713 inhabitants (according to the 2001 census). This urban area is a satellite of Paris.

Fontainebleau is renowned for the large and scenic forest of Fontainebleau, a favourite weekend getaway for Parisians, as well as for the historical Château de Fontainebleau, which once belonged to the kings of France. It is also the home of INSEAD, one of the world's most elite business schools; of the École supérieure d'ingénieurs en informatique et génie des télécommunications (ESIGETEL), one of France's grandes écoles; and of a branch of the École nationale supérieure des mines de Paris, the Paris School of Mines, also one of the elite grandes écoles.

Inhabitants of Fontainebleau are called Bellifontains.

Fontainebleau has been recorded in different Latinised forms, such as, Fons Bleaudi, Fons Bliaudi, Fons Blaadi in the 12th and 13th centuries, with Fontem blahaud being recorded in 1137. It became Fons Bellaqueus in the 17th century, which gave rise to the name of the inhabitants as Bellifontains. The name originates as a medieval composite of two words: Fontaine– meaning spring, or fountainhead, followed by a person’s Germanic name Blizwald.[2]

This hamlet was endowed with a royal hunting lodge and a chapel by Louis VII in the middle of the twelfth century. A century later, Louis IX, also called Saint Louis, who held Fontainebleau in high esteem and referred to it as "his wilderness", had a country house and a hospital constructed there.

The connection between the town of Fontainebleau and the French monarchy was reinforced with the transformation of the royal country house into a true royal palace, the Palace of Fontainebleau. This was accomplished by the great builder-king, Francis I (1494–1547), who, in the largest of his many construction projects, reconstructed, expanded, and transformed the royal château at Fontainebleau into a residence that became his favourite, as well as the residence of his mistress, Anne, duchess of Étampes.

From the sixteenth to the eighteenth century, every monarch, from Francis I to Louis XV, made important renovations at the Palace of Fontainebleau, including demolitions, reconstructions, additions, and embellishments of various descriptions, all of which endowed it with a character that is a bit heterogeneous, but harmonious nonetheless. 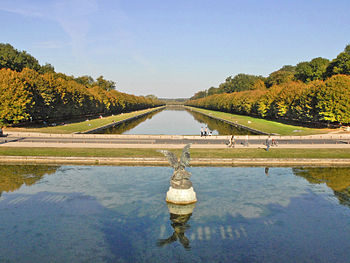 On 18 October 1685, Louis XIV signed the Edict of Fontainebleau there. Also known as the Revocation of the Edict of Nantes, this royal fiat reversed the permission granted to the Huguenots in 1598 to worship publicly in specified locations and hold certain other privileges. The result was that a large number of Protestants were forced to convert to the Catholic faith, killed, or forced into exile, mainly in the Low Countries, Prussia and in England.[3]

The 1762 Treaty of Fontainebleau, a secret agreement between France and Spain concerning the Louisiana territory in North America, was concluded here. Also, preliminary negotiations, held before the 1763 Treaty of Paris was signed, ending the Seven Years' War, were at Fontainebleau.

During the French Revolution, Fontainebleau was temporarily renamed Fontaine-la-Montagne, meaning "Fountain by the Mountain". (The mountain referred to is the series of rocky formations located in the forest of Fontainebleau.)

On 29 October 1807, Manuel Godoy, chancellor to the Spanish king, Charles IV and Napoleon signed the Treaty of Fontainebleau, which authorized the passage of French troops through Spanish territories so that they might invade Portugal.

On 20 June 1812, Pope Pius VII arrived at the château of Fontainebleau, after a secret transfer from Savona, accompanied by his personal physician, Balthazard Claraz. In poor health, the Pope was the prisoner of Napoleon, and he remained in his genteel prison at Fontainebleau for nineteen months. From June 1812 until 23 January 1814, the Pope never left his apartments.

On 20 April 1814, Napoleon Bonaparte, shortly before his first abdication, bid farewell to the Old Guard, the renowned grognards (gripers) who had served with him since his very first campaigns, in the "White Horse Courtyard" (la cour du Cheval Blanc) at the Palace of Fontainebleau. (The courtyard has since been renamed the "Courtyard of Goodbyes".) According to contemporary sources, the occasion was very moving. The 1814 Treaty of Fontainebleau stripped Napoleon of his powers (but not his title as Emperor of the French) and sent him into exile on Elba.

Until the 19th century, Fontainebleau was a village and a suburb of Avon. Later, it developed as an independent residential city. 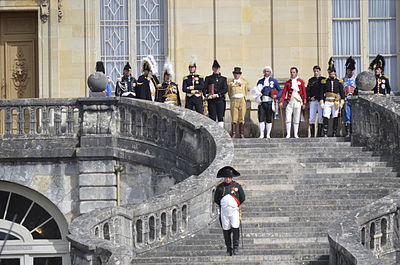 For the 1924 Summer Olympics, the town played host to the riding portion of the modern pentathlon event. This event took place near a golf course.[4]

In July and August 1946, the town hosted the Franco-Vietnamese Conference, intended to find a solution to the long-contested struggle for Vietnam’s independence from France, but the conference ended in failure.

Fontainebleau also hosted the general staff of the Allied Forces in Central Europe (Allied Forces Center or AFCENT) and the land forces command (LANDCENT); the air forces command (AIRCENT) was located nearby at Camp Guynemer. These facilities were in place from the inception of NATO until France’s partial withdrawal from NATO in 1967 when the United States returned those bases to French control. NATO moved AFCENT to Brunssum in the Netherlands and AIRCENT to Ramstein in West Germany. (Note that the Supreme Headquarters Allied Powers Europe, also known as SHAPE, was located at Rocquencourt, west of Paris, quite a distance from Fontainebleau).

The forest of Fontainebleau surrounds the town and dozens of nearby villages. It is protected by France's Office National des Forêts, and it is recognised as a French national park. It is managed in order that its wild plants and trees, such as the rare service tree of Fontainebleau, and its populations of birds, mammals, and butterflies, can be conserved. It is a former royal hunting park often visited by hikers and horse riders. The forest is also well regarded for bouldering and is particularly popular among climbers, as the biggest developed area of that kind in the world.

The Royal Château de Fontainebleau is a large palace where the kings of France took their ease. It is also the site where the French royal court, from 1528 onwards, entertained the body of new ideas that became known as the Renaissance. 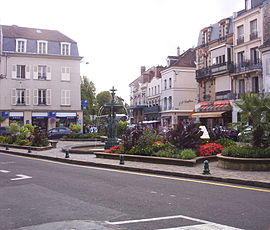 The European (and historical) campus of the INSEAD business school is located at the edge of Fontainebleau, by the Lycee Francois Couperin. INSEAD students live in local accommodations around the Fontainebleau area, and especially in the surrounding towns.

The graves of G. I. Gurdjieff and Katherine Mansfield can be found in the cemetery at Avon.

Fontainebleau is twinned with: