Fontvieille is the southernmost Ward in the Principality of Monaco. It was developed by an Italian architect, Manfredi Nicoletti, between the 1970s and the 1990s. 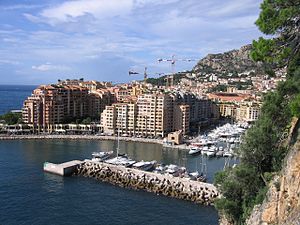 In contrast to the other city districts Monaco-Ville, Monte Carlo and La Condamine, Fontvieille was constructed, after Italian engineer Gianfranco Gilardini[1][2]'s design, almost entirely on artificially reclaimed land and thus represents one of the younger parts of the principality. In order to combat the chronic land shortage in the extremely densely populated principality, the work was begun in 1966 to create new land in the Mediterranean Sea southwest of le rocher.[3] In 1981, the then Crown Prince Albert (since April 6, 2005 Albert II, Prince of Monaco) laid the cornerstone for the new city quarter.[4]

The existence of Fontvieille, and its many public works projects, relates substantially to former Prince of Monaco, Prince Rainier III's reputation as the Builder Prince.

Plans announced in late 2009[5] to extend Fontvieille by the Department of Urban Development are currently being overseen by Prince Albert. The plan is to build a small 0.05 km² (0.02 sq mi) or 5.3 ha (13 acres) aura on the west side of the rock, currently planned to be finished by 2015. The new aura will include 3 to 4 new hotels, corporate businesses, shops and apartments for between 600-800 new comers.

4 hectares of Fontvieille are given over to the Fontvieille Park and Princess Grace Rose Garden.[9]

Fontvieille contains Stade Louis II (or Louis II Stadium), which serves as the home ground of AS Monaco FC, a Monaco football club that is one of the most successful in the French national league; the stadium also contains the club's offices and the International University of Monaco (IUM). The ground also hosted the European Super Cup, an annual event pitting the winners of the top UEFA club competitions, the Champions League and Europa League, between 1998 and 2012; it also serves as a venue for track and field, hosting an annual IAAF Diamond League event.

The district also contains Monaco Heliport, which provides frequent links to Nice Airport in neighboring France, with connections to direct flights to New York, London, and other important European destinations.

Venturi and its subsidiary Voxan are headquartered on the northern side of Fontvieille.