Food microbiology is the study of the microorganisms that inhabit, create, or contaminate food, including the study of microorganisms causing food spoilage.[1] "Good" bacteria, however, such as probiotics, are becoming increasingly important in food science.[2][3][4] In addition, microorganisms are essential for the production of foods such as cheese, yogurt, bread, beer, wine and, other fermented foods.

Food safety is a major focus of food microbiology. Pathogenic bacteria, viruses and toxins produced by microorganisms are all possible contaminants of food. However, microorganisms and their products can also be used to combat these pathogenic microbes. Probiotic bacteria, including those that produce bacteriocins, can kill and inhibit pathogens. Alternatively, purified bacteriocins such as nisin can be added directly to food products. Finally, bacteriophages, viruses that only infect bacteria, can be used to kill bacterial pathogens. Thorough preparation of food, including proper cooking, eliminates most bacteria and viruses. However, toxins produced by contaminants may not be liable to change to non-toxic forms by heating or cooking the contaminated food.

Fermentation is one of the methods to preserve food and alter its quality. Yeast, especially Saccharomyces cerevisiae, is used to leaven bread, brew beer and make wine. Certain bacteria, including lactic acid bacteria, are used to make yogurt, cheese, hot sauce, pickles, fermented sausages and dishes such as kimchi. A common effect of these fermentations is that the food product is less hospitable to other microorganisms, including pathogens and spoilage-causing microorganisms, thus extending the food's shelf-life. Some cheese varieties also require molds to ripen and develop their characteristic flavors.

Several microbially produced polymers are used in the food industry.[5]

Alginates can be used as thickening agents.[6] Although listed here under the category 'Microbial polysaccharides', commercial alginates are currently only produced by extraction from brown seaweeds such as Laminaria hyperborea or L. japonica.

Poly-γ-glutamic acid (γ-PGA) produced by various strains of Bacillus has potential applications as a thickener in the food industry.[7] 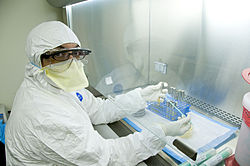 To ensure safety of food products, microbiological tests such as testing for pathogens and spoilage organisms are required. This way the risk of contamination under normal use conditions can be examined and food poisoning outbreaks can be prevented. Testing of food products and ingredients is important along the whole supply chain as possible flaws of products can occur at every stage of production.[8] Apart from detecting spoilage, microbiological tests can also determine germ content, identify yeasts and molds, and salmonella. For salmonella, scientists are also developing rapid and portable technologies capable of identifying unique variants of Salmonella .[9]

Polymerase Chain Reaction (PCR) is a quick and inexpensive method to generate numbers of copies of a DNA fragment at a specific band ("PCR (Polymerase Chain Reaction)," 2008). For that reason, scientists are using PCR to detect different kinds of viruses or bacteria, such as HIV and anthrax based on their unique DNA patterns. Various kits are commercially available to help in food pathogen nucleic acids extraction,[10] PCR detection, and differentiation.[11] The detection of bacterial strands in food products is very important to everyone in the world, for it helps prevent the occurrence of food borne illness. Therefore, PCR is recognized as a DNA detector in order to amplify and trace the presence of pathogenic strands in different processed food.