Footwork Arrows was the name of a Formula One motor racing team, competing during the mid-1990s. Japanese businessman Wataru Ohashi, who was the president of Footwork Express Co., Ltd., a Japanese logistics company, began investing heavily in the Arrows team in 1990, the deal including requiring the cars to display the Footwork logo prominently. The team was officially renamed Footwork in 1991, and secured a deal to race with Porsche engines. Results were poorer than expected, and after just six races, Footwork dropped the Porsche engines and continued with Hart-built Ford engines. However, that didn't allow Michele Alboreto, Alex Caffi or Stefan Johansson to score any points. In fact, Caffi's 10th from the 1991 Japanese Grand Prix was the best result and the Footworks even had to prequalify in the second half of the season.

For the 1992 season they switched engine supplier to Mugen. Arrows retained the Footwork name until Ohashi withdrew his financial backing before the 1996 season, whereupon the name of the team reverted to Arrows. Regardless, Jackie Oliver had retained operational control throughout the entire period.

Arrows was officially renamed Footwork for 1991. The season began with the A11C chassis with Porsche engines, but after neither Michele Alboreto or Alex Caffi qualified in Brazil there was a reshuffle with Alan Rees being made financial director and John Wickham named team manager. The prototype FA12 appeared but was then destroyed when its suspension failed at the notorious Tamburello turn at Imola. Alboreto suffered a broken foot which required several stitches and Caffi damaged a second new car at Monaco. Caffi was then hurt in a road accident a week later, and was replaced by Stefan Johansson for several races.

In June the team decided to replace the unsuccessful Porsche engines with Hart-prepared Cosworth DFR engines. Having failed to score points for a year the team was forced to pre-qualify from the half-way point of the season and appeared in the races only rarely in the second part of the year. Despite the problems the team opened a 40%-scale windtunnel at Milton Keynes.

For 1992, Caffi was dropped and Aguri Suzuki joined, bringing a supply of Mugen V10s. The FA13 chassis, designed by Alan Jenkins, was a conventional, straightforward car and Alboreto scored four times, 5th in both the Spanish and San Marino Grands Prix and 6th in both the Brazilian and Portuguese Grands Prix, the team finishing with six points and equal 7th with Ligier in the Constructors' Championship.

For 1993, Alboreto was dropped to make way for Derek Warwick who joined Suzuki with Mugen engines and a new FA14 chassis. It was a disappointing year, however. Warwick scored all the four points with a 6th place in the 1993 British Grand Prix and a 4th in the 1993 Hungarian Grand Prix, which remained the best Footwork result in history until late 1995. The team finished 9th in the Constructors' Championship with four points. At the end of the season Ohashi withdrew his sponsorship. The team lost its Mugen engines as a result, and had to return to Ford V8s for 1994. 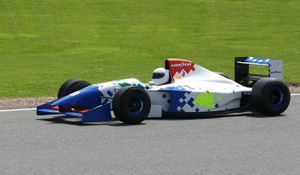 The team's FA15 chassis at the 2008 Silverstone Classic event.

Jenkins designed the Footwork FA15 for young drivers Gianni Morbidelli and Christian Fittipaldi but money was short. The neat car drew a number of admiring glances, with Fittipaldi taking 4th place at the Pacific Grand Prix, before being one of the stars of the Monaco Grand Prix, running third at one point until his gearbox failed. Initially the car was fragile, but just as the team began to solve the problems, the revised regulations that followed the deaths of Roland Ratzenberger and Ayrton Senna robbed the cars of their neat aerodynamics. Further points were scored in the German Grand Prix where the cars came 4th and 5th out of eight finishers Thanks to Michael Schumacher's disqualification from the Belgian Grand Prix, Morbidelli was promoted to 6th, which was some compensation for team-mate Fittipaldi being disqualified from 6th in the parc fermé at the 1994 Canadian Grand Prix. That allowed Footwork to finish 9th in the Constructors' Championship, with nine points. At the end of the year there was a setback when Fittipaldi quit Formula One and headed to the IndyCar World Series in the United States. Wickham also departed.

Massimiliano Papis driving for Footwork at the 1995 British Grand Prix.

With an increasingly difficult financial situation the team picked pay driver Taki Inoue to partner Morbidelli in the Jenkins-designed Arrows-Hart FA16. In the mid-season there was so little money that Morbidelli had to be replaced by Max Papis, although he returned for the last three races and scored Footwork's first podium in Adelaide. That result, plus a 6th place in the Canadian Grand Prix allowed Footwork to finish 8th in the Constructors' Championship, equal on points with Tyrrell but claiming the higher position due to better results (the best results for Tyrrell were two 5th places). At the end of the year, Jackie Oliver and Alan Rees bought back the shares from Ohashi thanks to assistance from finance house Schwabische Finanz & Unternehmensberatung AG.

In March 1996, Tom Walkinshaw acquired a controlling interest in the team by buying out Rees. Walkinshaw controlled 40% of the shares with an associate Peter Darnbrough buying 11% and Oliver retaining 49%. The team was renamed TWR Arrows for the remaining part of the 1996 season. Jos Verstappen scored with a 6th place in the Argentine Grand Prix the last ever point for Footwork in Formula 1. The team finished 9th in the Constructors' Championship, as they had done in 1993 and 1994.