From Infogalactic: the planetary knowledge core
Jump to: navigation, search
For other uses, see Forbes (disambiguation).

Forbes is an American business magazine owned by Forbes, Inc. Published bi-weekly, it features original articles on finance, industry, investing, and marketing topics. Forbes also reports on related subjects such as technology, communications, science, and law. Its headquarters is located in Jersey City, New Jersey. Primary competitors in the national business magazine category include Fortune and Bloomberg Businessweek. The magazine is well known for its lists and rankings, including its lists of the richest Americans (the Forbes 400) and rankings of world's top companies (the Forbes Global 2000). The motto of Forbes magazine is "The Capitalist Tool".[3] Its chairman and editor-in-chief is Steve Forbes, and its CEO is Mike Perlis. 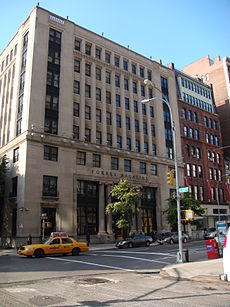 B. C. Forbes, a financial columnist for the Hearst papers, and his partner Walter Drey, the general manager of the Magazine of Wall Street,[4] founded Forbes magazine in 1917.[5][6] Forbes provided the money and the name and Drey provided the publishing expertise. The original name of the magazine was Forbes: Devoted to Doers and Doings.[4] Drey became vice-president of the B.C. Forbes Publishing Company,[7] while B.C. Forbes became editor-in-chief, a post he held until his death in 1954. B.C. Forbes was assisted in his later years by his two eldest sons, Bruce Charles Forbes (1916–1964) and Malcolm Stevenson Forbes (1917–1990).

Bruce Forbes took over on his father's death, and his strengths lay in streamlining operations and developing marketing.[5] During his tenure, 1954–1964, the magazine's circulation nearly doubled.[5]

On Malcolm's death, his eldest son Malcolm Stevenson "Steve" Forbes Jr. (1947–) became President and Chief Executive of Forbes and Editor-in-Chief of Forbes magazine.[8] Between 1961 and 1999 the magazine was edited by James Michaels.[9] In 1993, under Michaels, Forbes was a finalist for the National Magazine Award.[10] In 2006, an investment group Elevation Partners that includes rock star Bono bought a minority interest in the company.[8][11] A 2009 New York Times report said: "40 percent of the enterprise was sold ... for a reported $300 million, setting the value of the enterprise at $750 million. According to Mark M. Edmiston of AdMedia Partners, 'It's probably not worth half of that now.'"[12]

Sale of headquarters and relocation to Jersey City

In January 2010, Forbes reached an agreement to sell its headquarters building located on Fifth Avenue in Manhattan to New York University; terms of the deal were not publicly reported, but Forbes would continue to occupy the space under a sale-leaseback arrangement.[13] The company's headquarters subsequently moved to the Newport section of downtown Jersey City, New Jersey in 2014.[14][15]

In November 2013, Forbes Media, which publishes Forbes magazine, was put up for sale.[16] This was encouraged by Elevation Partners, of whom were minority shareholders. Sales documents prepared by Deutsche Bank revealed that the publisher's 2012 EBITDA was $15 million.[17] Forbes reportedly sought a price of $400 million.[17]

Apart from Forbes and its lifestyle supplement, Forbes Life, other titles include Forbes Asia and fifteen local language editions. Steve Forbes and his magazine's writers offer investment advice on the weekly Fox TV show Forbes on Fox and on Forbes On Radio. Other company groups include Forbes Conference Group, Forbes Investment Advisory Group and Forbes Custom Media. From the 2009 Times report: "Steve Forbes recently returned from opening up a Forbes magazine in India, bringing the number of foreign editions to 10." In addition, that year the company began publishing ForbesWoman, a quarterly magazine published by Steve Forbes' daughter, Moira Forbes, with a companion Web site.[12]

The company formerly published American Legacy magazine as a joint venture, although that magazine separated from Forbes as of May 14, 2007.[20]

Forbes has published the Forbes Travel Guide since 2009.

On January 6, 2014, Forbes Magazine announced that, in partnership with app creator Maz, it was launching a social networking app called "Stream". Stream allows Forbes readers to save and share visual content with other readers and discover content from Forbes magazine and Forbes.com within the app.[23]

Forbes.com is part of Forbes Digital, a division of Forbes Media LLC. Forbes's holdings include a portion of RealClearPolitics. Together these sites reach more than 27 million unique visitors each month. Forbes.com employs the slogan "Home Page For The World's Business Leaders" and sometimes claims to be the world's most widely visited business web site.[24] The 2009 Times report said that, while "one of the top five financial sites by traffic [throwing] off an estimated $70 million to $80 million a year in revenue, [it] never yielded the hoped-for public offering".[12]

Forbes.com uses a "contributor model" in which a wide network of "contributors" writes and publishes articles directly on the website.[25] Contributors are paid based on traffic to their Forbes.com pages; the site has received contributions from over 2,500 individuals, and some contributors have earned over US$100,000, according to the company.[25] Forbes currently allows advertisers to publish blog posts on its website alongside regular editorial content through a program called AdVoice, which accounts for more than 10 percent its digital revenue.[26] Forbes.com also publishes subscription investment newsletters, and an online guide to web sites, Best of the Web.

David Churbuck founded Forbes's web site in 1996. The company's current chief executive officer is Mike Perlis; the current chief product officer is Lewis D'vorkin; the current editor of the magazine is Randall Lane. The site uncovered Stephen Glass's journalistic fraud in The New Republic in 1998, an article that drew attention to internet journalism. At the peak of media coverage of alleged Toyota sudden unintended acceleration in 2010 it exposed the California "runaway Prius" as a hoax, as well as running five other articles by Michael Fumento challenging the entire media premise of Toyotas suddenly gone bad. The site, like the magazine, publishes many lists focusing on billionaires and their possessions, especially expensive homes, a critical aspect of the website's apparent popularity.[27]