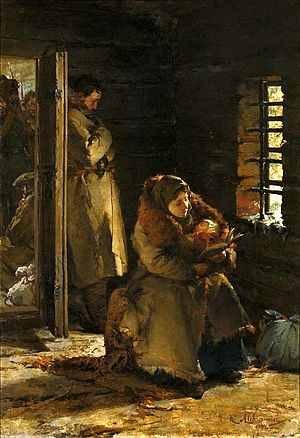 Deportees to Siberia by Kazimierz Alchimowicz (1894), National Museum in Warsaw, illustrating the torment of Polish Siberian deportees, patriots from the Russian zone of partitioned Poland in the period following the collapse of the January Uprising. 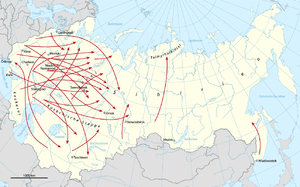 General deportation currents of the dekulakization 1930–1931

Forced migration (also called deracination — originally a French word meaning uprooting) refers to the coerced movement of a person or persons away from their home or home region. Migrating in the same country means the person is an Internally Displaced Person (or IDP). It often connotes violent coercion, and is used interchangeably with the terms "displacement" or forced displacement. According to Speare, "In the strictest sense migration can be considered to be involuntary only when a person is physically transported from a country and has no opportunity to escape from those transporting him.[citation needed] Movement under threat, even the immediate threat to life, contains a voluntary element, as long as there is an option to escape to another part of the country, go into hiding or to remain and hope to avoid persecution." However this thought has been questioned, especially by Marxians, who argue that in most cases migrants have little or no choice.[1] A specific form of forced migration is population transfer, which is a coherent policy to move unwanted persons, perhaps as an attempt at "ethnic cleansing". Someone who has experienced forced migration is a "forced migrant" or "displaced person". Less formally, such a person may be referred to as a refugee, although that term has a specific narrower legal definition.

The International Organization for Migration defines forced migration as any person who migrates to "escape persecution, conflict, repression, natural and human-made disasters, ecological degradation, or other situations that endanger their lives, freedom or livelihood.”[2][3]

Forced migration has accompanied persecution, as well as war, throughout human history but has only become a topic of serious study and discussion relatively recently. This increased attention is the result of greater ease of travel, allowing displaced persons to flee to nations far removed from their homes, the creation of an international legal structure of human rights, and the realizations that the destabilizing effects of forced migration, especially in parts of Africa, the Middle East, south and central Asia, ripple out well beyond the immediate region.

Development-induced displacement is a subset of forced migration. Such displacement is the forcing of communities and individuals out of their homes, often also their homelands, for the purposes of economic development. It has been historically associated with the construction of dams for hydroelectric power and irrigation purposes but also appears due to many other activities, such as mining. The best-known recent example of such development-induced displacement is that resulting from the construction of the Three Gorges Dam in China.

Causes for forced migration can include:

The term environmental refugee has been in use recently representing people who are forced to leave their traditional habitat because of environmental disruption i.e. biological, physical or chemical change in ecosystem.[5] An elaboration of such refugees is given by Essam El-Hinnawi. The first category is where people return to their original habitat once the disruption is over, as in the case of the Bhopal disaster.

The second classification is where people are permanently displaced. The third type of migrant includes those who seek better living conditions due to deterioration of environmental conditions in their present habitat, such as soil fertility.[6]

The United Nations High Commissioner for Refugees (UNHCR) reports that more people in 2012 became refugees or internally displaced people than at any time since 1994. The main cause for this displacement is war, with more than 55 percent of all refugees coming from five war-affected countries: Afghanistan, Somalia, Iraq, Syria and Sudan. UNHCR says Afghanistan is the world's "top producer" of refugees, a position it has held for 32 years. Forty-six percent of refugees are children under the age of 18. A record 21,300 asylum applications were submitted in 2012 from children who were unaccompanied or separated from their parents.[8]