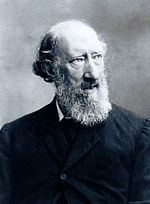 The Ford Lectures are a series of public lectures at the University of Oxford given annually in English or British history by a distinguished historian.[1] Known commonly as "The Ford Lectures," they are properly entitled "The James Ford Lectures in British History" and they are given by a scholar elected to be "Ford Lecturer in British History" at Oxford for a period of one year. The series, given in Michaelmas or Hilary term terms consists of at least six lectures, which are usually published as a book.

History of the lectureship

The lectures are named in honur of their benefactor, James Ford[2] (born at Canterbury, Kent 31 October 1779 – died at Navestock, Essex, on 31 January 1851), who had been educated at King's School, Canterbury and matriculated at Trinity College, Oxford in 1797. After graduating in 1801, he went on to his Master of Arts and Bachelor of Divinity degrees. He was a Fellow of Trinity College, Oxford from 1807 to 1830. His antiquarian collections have been dispersed, but survive in the holdings of the Bodleian Library, The Library of Trinity College, Oxford, The British Library, and the Cambridge University Library.

In his will, Ford left a number of bequests, some of which were held in trust for the support of his surviving siblings. After they had all died, Oxford University received his bequest of £2,000 to fund a professorship of English history, which was to be established when the principal had grown to support payment of £100 per year. When this goal was reached in 1894, the sum was not enough to support a professor at the current stipend. After considerable discussion within the University, the funds were assigned to fund an annual lectureship in English history by a lecturer who was to be chosen annually by a board of electors. The first Ford's Lecturer in English History was S. R. Gardiner, elected for the academic year beginning in 1896. In 1994, the University of Oxford formally changed the official title of the series from "Ford's Lectures in English History" to "Ford's Lectures in British History".[citation needed]

As the lectures may be given in either the Michaelmas or Hilary terms (or partly in both), confusion can arise on publication because either calendar year may be stated. The following list gives the academic year.

The following have been Ford Lecturers.[3]