From Infogalactic: the planetary knowledge core
Jump to: navigation, search
Not to be confused with fjord.
For other uses, see Ford (disambiguation). 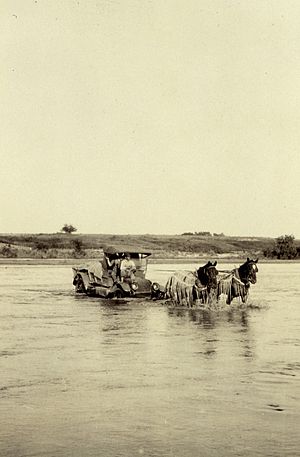 Crossing the Red River near Granite, Oklahoma in 1921 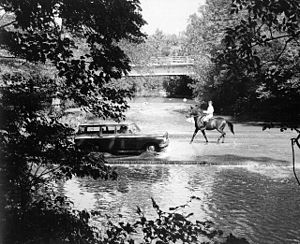 Crossing the Milkhouse ford through Rock Creek in 1960

A ford is a shallow place with good footing where a river or stream may be crossed by wading or inside a vehicle.[1] A ford is mostly a natural phenomenon, in contrast to a low water crossing, which is an artificial bridge that allows crossing a river or stream when water is low.

A ford is a much cheaper form of river crossing than a bridge, but it may become impassable after heavy rain or during flood conditions. A ford is therefore normally only suitable for very minor roads (and for paths intended for walkers and horse riders etc.). Most modern fords are usually shallow enough to be crossed by cars and other wheeled or tracked vehicles (a process known as "fording").

In New Zealand, however, fords are a normal part of major roads, including, until 2010, along State Highway 1 on the South Island's east coast.[2] As most inter-city domestic passengers travel by air and as much cargo goes by sea, long distance road traffic is low and fords are thus a practical necessity[clarification needed] for crossing seasonal rivers. In dry weather, drivers become aware of a ford by crunching across outwash detritus on the roadway. A Bailey bridge may be built off the main line of the road to carry emergency traffic during high water.

At places where the water is shallow enough, but the material on the riverbed will not support heavy vehicles, fords are sometimes improved by building a submerged concrete floor. In such cases a curb (kerb) is often placed on the downstream side to prevent vehicles slipping off, as growth of algae will often make the slab very slippery. Fords may be also equipped with a post indicating the water depth, so that users may know if the water is too deep to attempt to cross. Some have an adjacent footbridge so that pedestrians may cross without getting their feet wet. 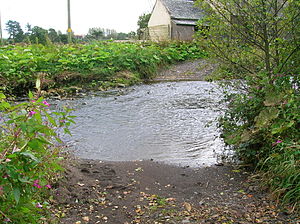 The Rye Water Ford in North Ayrshire, a rare unmodernised crossing of a minor river

A road running below the water level of a stream or river is often known as a "watersplash". It is a common name for a ford or stretch of wet road in some areas, and sometimes also used to describe tidal crossings. They have become a common feature in rallying courses. There are enthusiasts who seek out and drive through these water features, recording details (such as wave created, position and access) on dedicated websites.[3]

There are many old fords known as watersplashes in the United Kingdom. Examples are at Brockenhurst in Hampshire, Wookey in Somerset, and Swinbrook in Oxfordshire. Some of these are being replaced by bridges as these are a more reliable form of crossing in adverse weather conditions.

The Dean Ford in Kilmarnock, Ayrshire, is mentioned in the deeds of this[which?] property, which was gifted to the local people. The ford has had to be maintained as a property boundary feature, despite several cars a year being washed away.

Not just a British phenomenon, some very spectacular versions of the watersplash feature can be found in diverse locations. Australia has the Gulf Savannah, and others may be found in Canada, Italy, South Africa, and Finland. They are also found on some Tennessee backroads, where they are referred to as "underwater bridges".

The names of many towns and villages are derived from the word 'ford'; for example, Oxford (a ford where oxen crossed the river: see the Oxford coat of arms), or Stratford (a ford on a Roman road). Similarly, the German word Furt (as in Frankfurt, the ford of the Franks, Ochsenfurt, synonymous to Oxford, Schweinfurt, a ford where swine crossed the river, and Klagenfurt) and the Dutch voorde, (as in Vilvoorde, Coevorden, Zandvoort, or Amersfoort) are cognates and have the same meaning.

Towns such as Maastricht, Dordrecht, and Utrecht also formed at fords. The ending tricht, drecht, or trecht is derived from the Latin word traiectum, meaning "crossing". Thus the name Utrecht, originally the Roman fort of Traiectum, is derived from "Uut Trecht", meaning "downstream crossing". The Afrikaans form was taken into South African English as drift and led to place names like Rorke's Drift. Similarly, in Slavic languages, the word brod comes from the linguistic root that means "river-crossing" or "place where a river can be crossed". Although today "brod" in the Croatian language means "ship", Slavonski Brod in Croatia, as well as Makedonski Brod in Macedonia and other place names containing "Brod" in Slavic countries, where "brod" is still the word for ford, are named after fords. 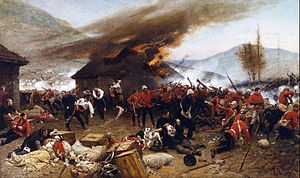 The Battle of Rorke's Drift in the Anglo-Zulu war 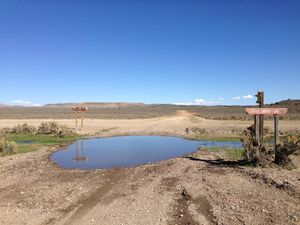 Because in historic times a ford was often a strategic military point, many famous battles were fought at or near fords.