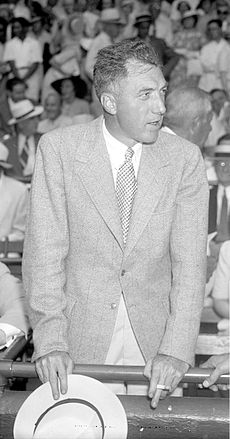 The Ford C. Frick Award is presented annually by the National Baseball Hall of Fame in the United States to a broadcaster for "major contributions to baseball." It is named for Ford C. Frick, former Commissioner of Major League Baseball. Before his career as an executive, Frick was a baseball writer; he gained fame as the ghostwriter for Babe Ruth in the 1920s. The award was created in 1978, and named in tribute to Frick following his death that year.

Though they are sometimes erroneously referred to as "Hall of Famers", honorees are not inducted into the Hall of Fame.[1] Honorees (if living) give a speech at the Hall of Fame during induction weekend, and their names are added to a plaque in the Hall's library. For several years in the early 2000s, Frick Award honorees also became life members of the Veterans Committee, which considers candidates for Hall of Fame induction who are not eligible for the regular voting by the Baseball Writers Association of America – specifically, players no longer on the BBWAA ballot and all non-players. However, starting with the 2008 elections, voting for players on the main Veterans Committee ballot was restricted to Hall of Fame members. After further changes announced for the 2011 elections, Frick Award winners are eligible to serve on all three of the Veterans Committee voting bodies that consider candidates from different eras of baseball.

Since 2004, fans have been allowed to vote for three of the award's ten annual nominees; this voting is currently conducted on the Hall's Facebook page. Through 2013, seven candidates were selected by a committee consisting of previous Frick Award winners and broadcast historians and columnists, which also determined the final recipient. Beginning with the 2014 award, the final election committee no longer selects any of the finalists; that role is now handled by a Hall of Fame research committee.[2]

Other changes in the selection process were also announced for the 2014 award; these changes are similar to those instituted in 2010 for Veterans Committee balloting. Candidates are now considered every third year, based on the era in which they made their most significant contributions:[2]